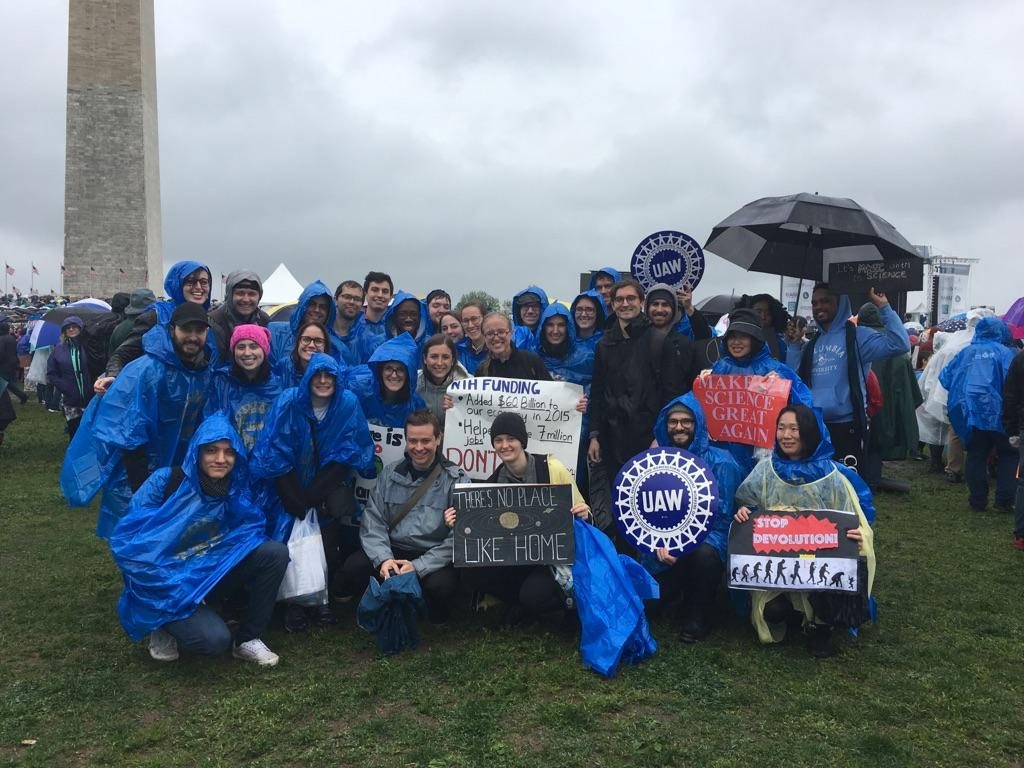 On Saturday, Earth Day, tens of thousands of people participated in the March for Science at the National Mall in Washington, D.C., and numerous other cities across the U.S.  Among the participants in Washington were hundreds of UAW members who rallied behind the mission of the event and spent the day celebrating science.

The passionate crowd gathered to generate a conversation about the alarming trend toward discrediting facts and scientific consensus, and restricting scientific discovery.

Sarah Joseph, a UAW Local 2110 member from the Department of Genetics at Columbia University, had a very personal reason for participating in the March for Science.  “I march because without science I would not have been born.  I was conceived through IVF (in vitro fertilization), and I march because without science many of my family members would not be alive today.

“I am participating to raise awareness for science and to dispel the misconception that there is such a thing as ‘your’ facts.  Facts are facts.  It is the interpretation of facts that is up for debate,” said Joseph.

The March for Science champions and defends science and scientific integrity, but it is a small step in the process toward encouraging the application of science in policy.  March for Science organizers and participants say the best way to ensure science will influence policy is to encourage people to appreciate and engage with science. That can only happen through education, communication and ties of mutual respect between scientists and their communities — the paths of communication must go both ways. There has too long been a divide between the scientific community, the public and the politicians who represent them.

change that,” said Catherine Braine, a UAW Local 2110 member from the Department of Neurobiology and Behavior at Columbia University.

“I am also a graduate student whose research is funded by NIH (National Institutes of Health), the organization the Trump budget wants to cut by 20 percent,” Braine added.  “It’s important for everyone to be involved because everyone should push for policies that acknowledge objective reality and seek to be responsible guardians of the Earth.”

As debates continue in Washington over funding of science, Saturday’s event sent a very clear message to politicians: Back up your reasons for doubting scientific evidence and, more important, back off science funding!