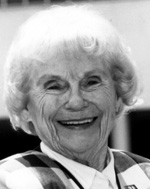 Born in Alton, Iowa, in 1910, Jeffrey was the oldest of seven children. She graduated from the University of Minnesota in 1932 with a bachelor’s degree in psychology and received a master’s degree in social economy and social research in 1934 from Bryn Mawr College. In graduate school, Jeffrey realized that she would have to change the system to improve the lives of working women and men and joined the labor movement.

Jeffrey became an organizer for the Amalgamated Clothing Workers of America in Philadelphia and then educational director of the Pennsylvania Joint Board of Shirt Workers. In 1936, she married fellow Amalgamated organizer Homer Newman Jeffrey, and they traveled throughout the South and East organizing textile workers. During World War II, the Jeffreys worked in Washington as consultants to the War Labor Board, where they became close friends with Walter, Victor and Roy Reuther.

The Jeffreys moved to Detroit in 1944 when Victor Reuther offered Millie Jeffrey a job as director of the newly formed UAW Women’s Bureau. Jeffrey’s commitment to equal rights fueled her career at the UAW. She organized the first UAW women’s conference in response to the massive postwar layoffs of female production workers replaced by returning male veterans. From 1949 to 1954, Jeffrey ran the union’s radio station. She later directed the Community Relations Department and was director of the Consumer Affairs Department from 1968 until her retirement in 1976.

Jeffrey joined the NAACP in the 1940s and marched with Dr. Martin Luther King Jr. in the 1960s. She was very active in the Democratic Party and was a founding member and chair of the National Women’s Political Caucus.

Jeffrey ran for public office in 1974 and was elected to the Wayne State University Board of Governors, an office she held until 1990. She served three terms as board chair.

Jeffrey was inducted into the Michigan Women’s Hall of Fame and was an original board member of the Michigan Women’s Foundation. She served in various leadership roles in a wide variety of national and state organizations including the Michigan Women’s Political Caucus and the Coalition for Labor Union Women (CLUW). In 2000, Jeffrey was recognized for her dedication to social justice when President Bill Clinton awarded her the Medal of Freedom, the highest civilian award bestowed by the United States government.