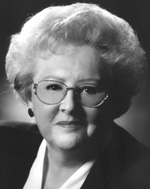 Geri Ochocinska was the first woman to be elected as a UAW regional director in 1998. She was re-elected in 2002 to lead UAW Region 9, an area that includes New York, New Jersey and most of Pennsylvania.

Ochocinska became a UAW member in 1965 after helping organize her co-workers at Rich Ice Cream Co. in Buffalo, N.Y., as a technical, office, and professional unit of UAW Amalgamated Local 55.

She was elected unit chair and served until 1969, when she became the local’s office manager and assistant administrator of its retirement income and welfare funds. In 1971, Ochocinska was promoted to business representative of the local with responsibilities including contract negotiation and grievance and arbitration handling for many of the Local 63 units. She was elected vice president and financial secretary/treasurer before being appointed as a Region 9 International Representative in 1976 to service more than 60 companies in western New York. Ochocinska also developed and taught educational programs for union leaders and assisted in organizing new members.

In 1994, Ochocinska became the first woman to serve as an assistant regional director when she was appointed to that post by then-Region 9 Director Tom Fricano.

Ochocinska served as a board of directors member on a number of organizations, including the Coalition of Labor Union Women (CLUW), the Statewide Labor Advisory Committee for Cornell University’s School of Industrial and Labor Relations, Union Occupational Health Center, Coalition of Economic Justice, Northeast-Midwest Alliance of Management and Labor, the Public Broadcasting Association of Western New York, and the International Foundation of Employee Benefit Plans. She was also a president of the Industrial Relations Research Association of Western New York.