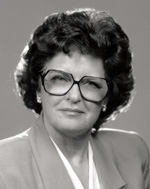 Carolyn Forrest was elected to the International Executive Board as a UAW International Vice President in 1992 by delegates to the union’s 30th Constitutional Convention.

Forrest joined the UAW in 1957. Six weeks after being hired as a spotwelder at J.R. Winter Co., she became a leader in the successful organizing drive which resulted in affiliation with UAW Local 408. When J.R. Winter closed, Forrest found work at the Hoover Chemical plant, also represented by Local 408.

At Hoover, Forrest demonstrated her outspoken style and decisive leadership.  She was first elected steward and then to the bargaining committee. Forrest was later elected plant chair and in 1959, she was elected local financial secretary-treasurer.

In 1967, Forrest became the UAW’s first female servicing representative when UAW President Walter Reuther appointed her to the staff of UAW Region 1E, which encompassed Detroit’s southwest suburbs and is now part of Region 1A.

Forrest was assigned to service independents, parts and supplier plants, as well as technical, office and professional employees at the University of Michigan and Eastern Michigan University.

Forrest was active in many civic and community activities.  She was a founding member of the Coalition of Labor Union Women (CLUW); inducted into the Academy of Women Achievers of the YWCA of the City of New York in 1989; a Lifetime Member of the NAACP, and in 1980 received the Harriet Tubman Award from the Detroit Chapter of the Coalition of Black Trade Unionists for distinguished service in the labor movement and the community.

In 1995, Forrest was named the recipient of the first Lifetime Achievement Award presented as part of the Outstanding Women in the Automotive Industry awards, given jointly by McCall’s and Ward’s Auto World magazines and the New York International Auto Show.