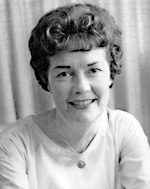 Davis was born in 1911 in Farmers, Ky.  Her family moved to Gas City, Ind., where Davis attended school. In 1934, she began to work as a drill press operator at Excel Corporation in Elkhart, Ind. In 1941, Davis helped organize her plant into UAW Local 764.

Davis was elected to the local’s first negotiating committee and later was elected as the first woman president of a UAW local. Her successful performance as president resulted in her re-election for four consecutive terms.

As director of the UAW Women’s Department, Davis and her staff of three helped approximately 200,000 UAW female members obtain adequate contract provisions in the areas of equal pay for equal work, seniority, maternity leaves of absence, health and safety conditions, training and promotional opportunities.  Davis also worked with many community, state and national organizations to seek legislation to elevate the status of women.

Davis testified before Congress in support of the Equal Pay Act and campaigned tirelessly for its passage. In her prepared remarks on behalf of the UAW Women’s Department, Davis told Congress, “Unequal pay is immoral.”

Davis was involved in numerous groundbreaking committees and organizations established to advocate for women, including the Department of Labor’s National Trade Union Women’s Advisory Committee, the National Committee for Equal Pay, President John F. Kennedy’s Commission on the Status of Women, Women’s Equity Action League and the National Women’s Political Caucus. She was a co-founder and national officer on the first board of the National Organization for Women (NOW).

Davis served as UAW Women’s Department director until 1973. She died in 1988.