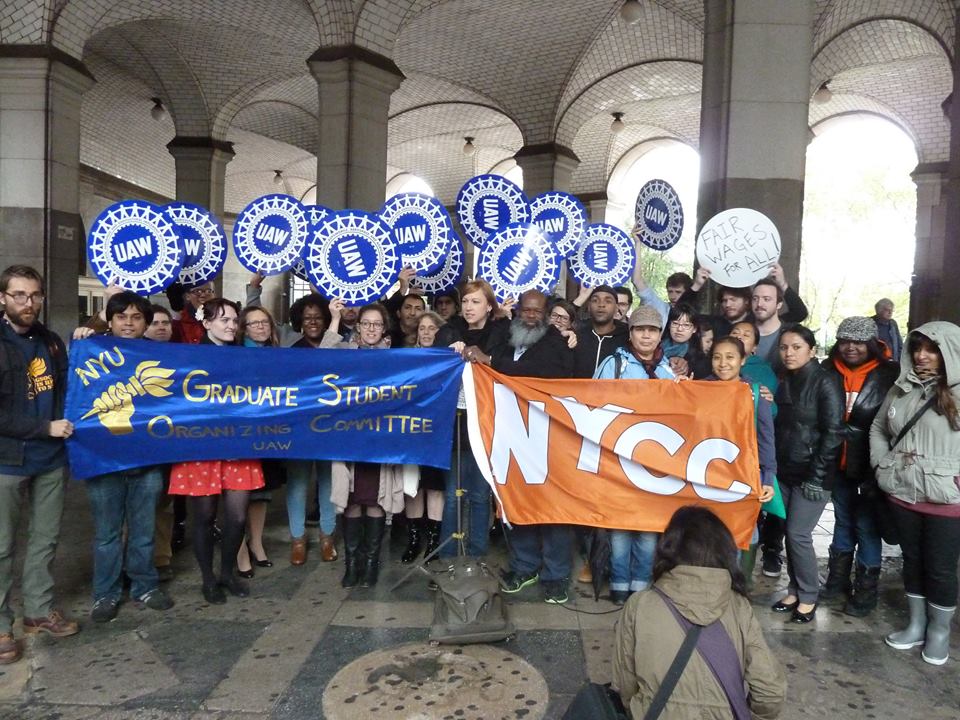 The United Auto Workers announced today the ratification of the contract with New York University which covers over 1200 graduate employees,
members of the Graduate Student Organizing Committee-UAW Local 2110, who perform various functions for the university including teaching and  research.  Once again, this  makes NYU the only private university in  the country with a unionized graduate employee workforce.  The agreement was ratified by 99% of the membership, with nearly 1,000 members voting.

“This contract is a major step forward for our members,” said Julie Kushner, Director of UAW Region 9A.  “They did not back down after being stripped of their bargaining rights in 2005.Their commitment to justice will have a huge impact on  the working lives of teaching and research  assistants throughout the university. This victory has already inspired other private sector graduate employees to organize.”

The agreement made substantial gains in wages, health care, including a 90% subsidy towards individual coverage and first time support for dependent coverage, childcare benefits and tuition waivers.  In addition, it doubles the starting wage to $20 per hour over the life of the five-year agreement for workers at NYU’s Polytechnic School of Engineering, who perform and support cutting edge research. (Greater detail is appended below.)

“This contract will make a real difference in our lives here at NYU, and will raise the bar for private sector graduate working people nationally,” said Lily Defriend, a Ph.D candidate in the Anthropology Department. “Right here in New York City our campaign and this contract win have contributed to graduate employees at Columbia and The New School organizing at the UAW.”

After being the first group of private university graduate workers to successfully unionize in 2000, the UAW won a groundbreaking contract at NYU.  In 2005 the university withdrew recognition, hiding behind a Bush-era NLRB decision stripping graduate employees of the right to collective bargaining.  Undeterred, the workers at NYU fought an eight year battle for recognition and the university agreed to recognize the UAW once again subject to an election, in which they remained neutral, conducted by the American Arbitration Association.  The workers voted 98.4% in favor of being represented by the UAW in December 2013.