The Motor City is Ready for You

There’s Plenty to Do and See in This Union Town

Welcome to Detroit! You will notice a lot of construction in Detroit while getting around town to attend the 37th UAW Constitutional Convention – and that’s a good thing.

Motown is America’s Comeback City. Residences and businesses are popping up quick as investors, potential residents and tourists are looking at the city anew. Detroit was rated the No. 2 Top City to visit in Lonely Planet’s “Best in Travel 2018.” New hotels, apartment buildings, restaurants, transportation and just about anything else you can think of are changing the city’s landscape.

One thing that hasn’t changed is that Detroit is a union town. We’re proud that unions built this city and play a key role in its stunning turnaround. You will feel right at home. Detroit is the home of the UAW headquarters, just three miles east of the convention center on East Jefferson Avenue. The domestic automakers, FCA USA, Ford Motor Co. and General Motors Corp. — retain their headquarters in the area, with GM a stone’s throw away at the Renaissance Center, Ford at its home in Dearborn, and FCA USA a short drive to the north in Auburn Hills, Michigan. All three automakers have many facilities in the city and the suburbs.

Detroit sits largely in UAW Region 1, which covers the east side of Detroit, several nearby counties and parts of Ontario, Canada, just beyond the Detroit River.

Of course, we’re proud that our membership includes autoworkers who produce just about everything from award-winning cars and trucks to many other innovative automotive products and parts. But we’re not just limited in membership to the auto industry. Just a short distance away from the convention center are the Greektown, Motor City and MGM Grand Detroit casinos, where dealers, servers and other workers are proud UAW members. If you head to Dearborn’s Greenfeld Village, one of the area’s most popular attractions with 80 acres of historic structures and demonstrations showing the entrepreneurial spirit of America’s history, you’ll fnd that the artisans there are UAW members. The popular Henry Ford Museum is also nearby.

Many public workers in city government in Detroit and nearby suburbs share UAW membership with you. Our members also include State of Michigan workers, librarians, and academic workers at Wayne State and Oakland universities. We work for health care organizations such as Health Alliance Plan, Delta Dental, Blue Cross Blue Shield of Michigan and Blue Care Network. Our members are librarians with the Detroit Public Libraries, and referees and lawyers in nearby Warren. Our ranks include skilled maintenance workers at the Roberts Riverwalk Hotel in Detroit, lawyers with Wayne County’s Friend of the Court, and a host of technical, offce and professional workers and other proud UAW members in and around the city. Together, we’re helping to remake Detroit, while reminding people that good-paying jobs that help support families are critical to this city renaissance. Enjoy your stay!

Planning Ahead Can Avoid Headaches

Like any large metropolitan U.S. city – particularly one with so much new construction going on – Detroit can be a challenge to get around. But knowing where you’re going and how to get there in advance of your trip can avoid unnecessary delays.

New to Detroit is the Q-Line, a 3.3-mile circulating streetcar along Woodward Avenue between Congress Street and West Grand Boulevard, with stops in the Downtown, Midtown and New Center areas. Go to qlinedetroit.com to plan your ride. There are plenty of restaurants and other attractions along the Q-Line, which opened last year. A single pass is $1.50, and a day pass is $3. It connects to regional and city bus service, as well as the Detroit People Mover. 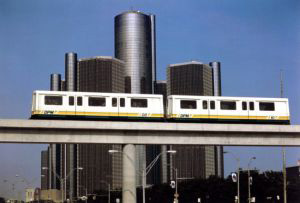 What’s the People Mover? As you look outside the convention center, notice that train running a continuous loop over downtown streets? That’s the Detroit People Mover, a fully automated light rail system that operates on an elevated single-track loop in Detroit’s central business district. The trains stop for passengers at 13 structures, including Cobo Center. Take the full loop and the ride offers a sensational view of the Detroit River with Windsor, Canada, on the other side. The General Motors building, down the street from Cobo, is another stop. If you’re staying at the Marriott Renaissance Center or the Downtown Courtyard by Marriott, you’re on the People Mover route. The train also snakes its way to other popular local downtown spots such as Greektown – a hot downtown spot for eating and entertainment, Comerica Park, where the Detroit Tigers play, and many other attractions. Seventy-five cents gets you on board and you can ride as long as you want.

Regular weekday operating hours are 6:30 a.m. to midnight, except on Friday when it stops at 2 a.m. It runs 9 a.m. Saturday to 2 a.m. Sunday, and noon to midnight on Sunday. All vehicles and stations are handicap accessible, and each vehicle has two secure wheelchair areas. Go to thepeoplemover.com for additional information.

When the convention is in recess, check out all the great entertainment and attractions the city of Detroit has to offer. For events and information, go here.

The Cobo Hall Hospitality Booth will be open Sunday from noon to 5 p.m. and Monday through Friday from 8 a.m. to 5 p.m.