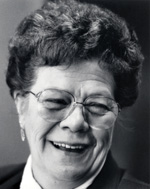 Odessa Komer was elected to the UAW International Executive Board as a vice president in 1974 by delegates to the union’s 24th Constitutional Convention.  Komer was re-elected to that post at every subsequent convention until she retired in 1992.

Komer joined Local 228 on June 6, 1953, when she was hired as an assembler at the Ford Sterling plant.

During her 14 years at Local 228, Komer was elected or appointed to numerous leadership positions in the 7,000-member Local.  In each instance, Komer was the first woman to serve in the position.

In her various local union roles, Komer participated in all phases of bargaining.  As full-time recording secretary, she was assigned to handle the benefits section of the UAW National Ford contract, including pensions, insurance and workers’ and unemployment compensation.

In 1964, while serving on the local bargaining committee, Komer was responsible for bargaining a contract clause in the local agreement to make seniority a consideration for better job assignments in support of equality for women. That clause was later incorporated into the 1967 UAW National Ford agreement.

In 1967, Komer was appointed to serve as an International Representative as Region 1 education director. In that capacity, Komer organized and taught education programs for the 100,000 member Region which extends from the east side of metropolitan Detroit to the thumb area of the state.

In 1988, UAW President Owen Bieber appointed Komer to direct the Aerospace Department and lead negotiations at many companies in the aerospace industry including McDonnell Douglas, Rockwell International, Martin Marietta and General Electric. She was also appointed to direct the UAW’s Dana and Champion departments.

During her life, Komer participated in many labor, civic and community activities.  From 1972 through 1978, she served as a member of the board of trustees of Macomb Community College. She was also a national officer of the Coalition of Labor Union Women (CLUW), co-chair of the National Coalition for the Reproductive Rights of Workers (CRROW), and chair of the Labor Participation Committee of the Untied Foundation. She was a life member of the NAACP.

Komer also served as a member of President Jimmy Carter’s Advisory Committee for Women, the National Organization for Women (NOW), the Board of Advisers of the Women’s Occupational Health Resource Center, the Northeast Interfaith Center and the International Women’s Year Continuing Commission, among others.