Working closely with the International and Regional UAW leadership and staff, Local 578 leaders and membership have built a robust campaign to support union jobs at Oshkosh Defense.  What started as a small local campaign has grown into a national struggle bringing together organized labor and environmental groups who are joining in the fight for a sustainable future with economic justice and workers’ rights.  In the words of a Local 578 member, this is “the fight of our life.”

Members of UAW Local 578 have a proud history of building defense and all-terrain vehicles for Oshkosh Defense. For more than eight decades, our members have built this company and its reputation for top-tier production and manufacturing work. We have also used our voice to negotiate good, union jobs that fuel our local economy and support families throughout the Fox Valley. Unfortunately, we have lost more than 1,000 of these jobs in roughly the last decade.

That’s why we’re telling Oshkosh Defense to invest in us and build the new USPS vehicle with union workers who have built the company. We can build it! 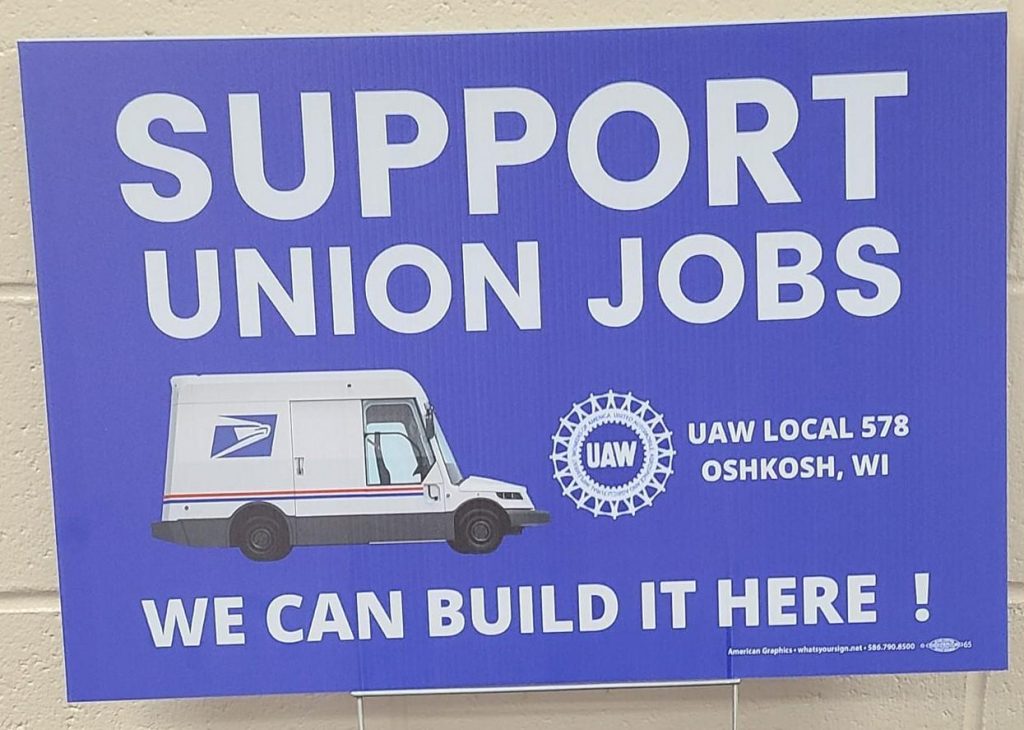 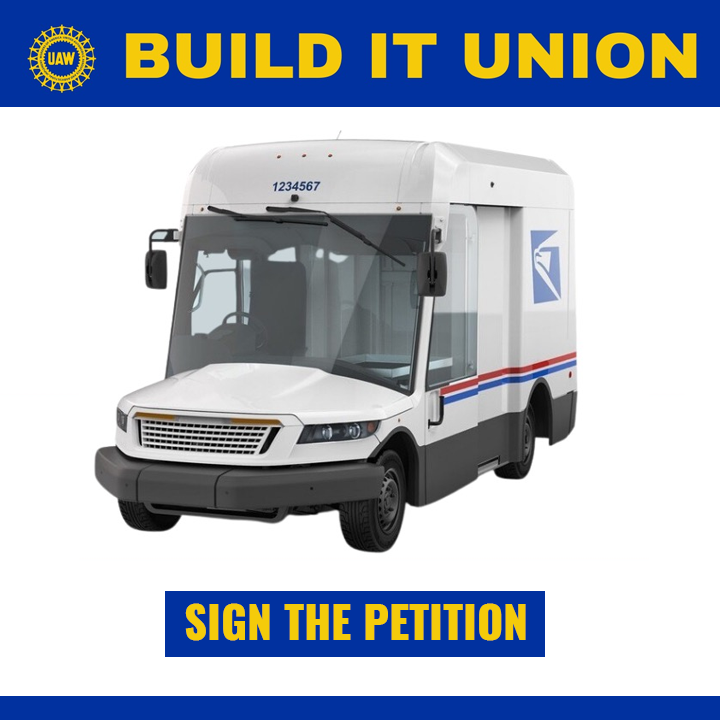 Last year, the United States Postal Service (USPS) awarded Oshkosh Defense a multibillion-dollar contract to build up to 165,000 “next generation delivery vehicles” (NGDVs). UAW Local 578 members in Oshkosh have done prototype work since the contract was awarded. But instead of doing the work in Oshkosh, the company announced the NGDV contract would be produced in a new facility in another state. And rather than electrifying the fleet, the USPS and Oshkosh plan to build tens of thousands of gas vehicles that get just 8.6 miles per gallon.

Generations of Wisconsin union workers have built Oshkosh Defense for decades, establishing the world-class reputation that helped the company win this contract in the first place. This vehicle is a huge opportunity to restore quality union jobs to the community that built this company.

We can’t allow Oshkosh Defense to leave community members or our climate in the dust. Tell Oshkosh to build these NGDVs union. We can build it!

Oshkosh Defense was one of five finalists for the contract to produce prototype mail vehicles. All of the development work was done in Wisconsin.

Oshkosh Defense wins multibillion-dollar contract with the USPS to build up to 165,000 “next generation delivery vehicles” (NGDVs).

Local 578 launches petition for USPS to reconsider its decision and keep jobs in Wisconsin. A majority of members sign the petition.

US House Committee on Oversight and Reform leaders send letter (linked here) to Oshkosh executives seeking information to determine if the company is attempting to avoid union labor in its plans to build the NGDV.

Oshkosh Defense sent a big contract to the non-union South. Will it keep future jobs in Wisconsin?

The news in early 2021 that Oshkosh Corp.’s defense subsidiary had secured a multi-billion dollar federal contract to build up to 165,000 postal trucks elicited a mix of pride and relief among Oshkosh, Wisconsin residents.

But the euphoria lasted barely four months. By June 2021, Oshkosh Defense announced it would not build tens of thousands of postal trucks in its existing Oshkosh assembly lines. but shift production to a $155 million plant out of state. Instead of getting 1,000 new assembly workers, Wisconsin now stands to add around 100 design and administration jobs under the contract.

WASHINGTON — Attorneys general from 16 states and the District of Columbia, along with five environmental groups and the United Auto Workers, launched a legal challenge against the United States Postal Service on Thursday, claiming that it violated the law when it ordered thousands of new mail trucks powered by gasoline instead of electricity.

Together, the three lawsuits filed in two different federal courts raise the stakes of a conflict over the climate impacts of the Postal Service’s iconic delivery trucks that has roiled the administration for months.

Under questioning from Rep. Alexandria Ocasio-Cortez (D-New York), Victoria Stephen of the U.S. Postal Service said that after Oshkosh Corporation initially won the contract, the service got a heads up that the company was going to do the work in South Carolina.

“Yeah, the postal service was made aware of that decision shortly before the public announcement. And it is a decision that’s at the discretion of the supplier,” Stephen said.

Ocasio-Cortez followed up: “After the ink was dry, it looks like they’re opening up a scab facility in South Carolina, with no prior history of producing vehicles in that facility.”

“Our fight is to bring it home to where we feel it belongs. Our reputation is what this was awarded on,” Lynk said. “We need to build back union, especially here in Oshkosh and the surrounding area.”

United Auto Workers built Oshkosh Defense; it’s time for the company to invest back in us

…the new contract belongs here in Wisconsin and should be built by union labor — just as Oshkosh Defense products have always been. We can build these trucks right across the street in underutilized factory space, which would create hundreds more good-paying union jobs, support our workers and families who live across 14 counties in Wisconsin and bring business to our locally owned shops that count on our spending.

Labor Voices: We should all stand for putting union jobs and workers first

“UAW Local 578 members are among those demanding answers. Oshkosh Defense’s credentials for the contract are built upon the quality work done by UAW members. It is their dedication and skill that helped build the company, a company that is now running away from its workers.”

Oshkosh told UAW workers for years that the USPS contract would not be through Oshkosh Defense, whose facilities are based in Wisconsin. When it was awarded to the defense unit, though, they assumed it would be located in their community. “When this first came out, the feedback from our members was, ‘Hey, ten-year contract, this will get me to retirement,’” said Tim Jacobson, a painter and chief steward of UAW Local 578.

Ultimately, that plan changed. Members had to find out through the media that Oshkosh was outsourcing the work to South Carolina. “Once it got awarded to Oshkosh Defense, we weren’t told the complete facts,” said Bob Lynk, president of Local 578.

Both Lynk and Jacobson testified before the USPS Board of Governors last week, urging them to work with Oshkosh Defense to keep the plant in Wisconsin.

In the lawsuit, UAW and NRDC highlight USPS’ failure to comply with the National Environmental Policy Act (NEPA) in its acquisition of thousands of postal trucks, referred to as Next Generation Delivery Vehicles (NGDV’s), and failure to consider where, when and how the vehicles would be produced.

QUIRMBACH: Robert Lynk heads the United Auto Workers local at the Wisconsin plant and says the Postal Service chose Oshkosh because of its skilled union employees.

ROBERT LYNK: Our good workmanship, quality of work, over 84 years being unionized here – and going to keep fighting until we get some of it done.

“We have a huge pool of skilled laborers who are ready to get to work. What’s more is our workforce has been trained and built the highly complex military vehicles that keep our troops safe. Our workmanship is second to none,” Lynk said.

Tim Jacobson, chief steward for the union, said the Oshkosh facility can execute the project “better than anyone else could.”

‘Good jobs are worth fighting for’: Union workers rally support for bringing 1K jobs to Wisconsin

“Many times, we’re told that good jobs are worth fighting for,” said Bob Lynk, president of the UAW Local 578. “Well, that fight is now. We need to fight to secure our future.”

The UAW said it’s willing to meet with the senator, who made headlines several days ago for declining to push Oshkosh Corporation to build the vehicles in Oshkosh, saying, “It’s not like we don’t have enough jobs here in Wisconsin.”

“We want Oshkosh to have the work,” [Local 578 President Bob] Lynk said during the media availability arranged by the state Democrats.

“This is Oshkosh. We believe we deserve that work,” [Local 578 Chief Steward Tim] Jacobson said. “We have the facilities to do that work.”