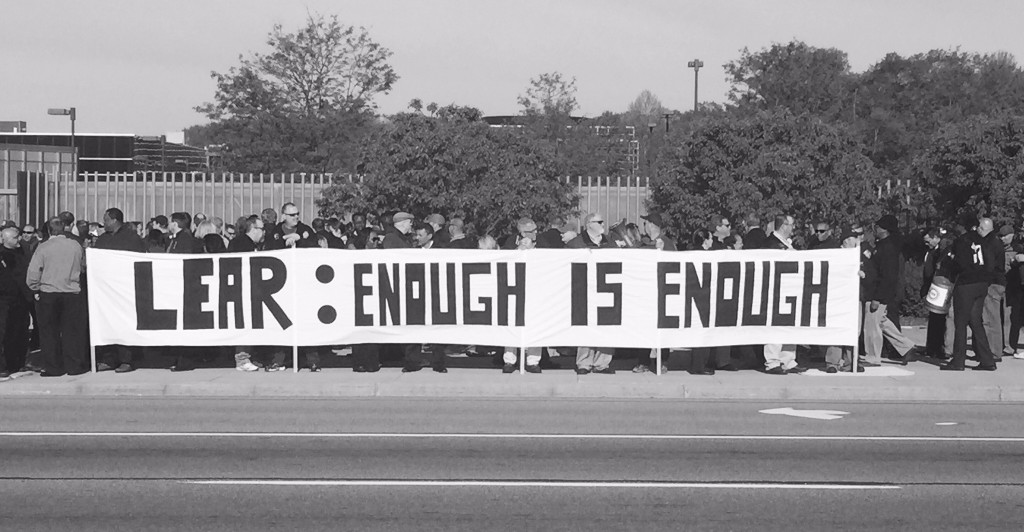 Southfield, Mich. – Workers from Lear plants across the country entered the company’s annual shareholder meeting Thursday morning and spoke directly to Lear Corp. CEO Matthew J. Simoncini and the company’s Board of Directors to demand good jobs and safe workplaces at its plants nationwide. Lear workers entered the shareholder meeting following a major protest with hundreds of auto workers, UAW members, and community supporters who joined together to call for an end to the low pay, unsafe working conditions, and retaliation facing workers at the $17 billion company that supplies Hyundai, Mercedes, BMW, and other major automakers.

Lear workers who addressed the shareholder meeting were joined in support by Heaster Wheeler, former executive director of the Detroit NAACP, and Jeff Brown, a union worker at Lear’s plant in Rochester Hills, Mich., and member of UAW Local 5960. The full text of their prepared remarks is available below:

The following statement can be attributed to Heaster Wheeler, former Executive Director of the Detroit NAACP:

“Good morning. My name is Heaster Wheeler. For many years, I have been active in Detroit-area government and community work, currently as the Chief Innovation Officer for Black Family Development, and formerly as Executive Director of the Detroit Branch of the NAACP, among other roles.

“As you well know, it has been a prosperous year for Lear. That’s a good thing, or at least it should be, for shareholders, management, and workers alike. For years, when manufacturing thrived in America, so did the workers on the front lines who made those products.

“That has changed in the past decade, as manufacturing wages failed to keep pace with inflation. Workers who once had jobs that could support a family find themselves struggling to get by. Through much of this period, Lear remained committed to creating good jobs and providing a voice in the company’s future. But from what I’ve heard from some of your employees, who are here with me today, this commitment has wavered.

“We are here today to ask you, Lear’s senior leadership, to consider a very important question — Why has Lear responded so aggressively to a set of reasonable proposals from your own employees? A safe workplace. A fair wage. Respectful treatment on the shop floor. A voice in the company’s future. The majority of Lear’s workers in the United States have achieved these sorts of gains, and Lear is enjoying record profits. Why don’t the other workers, who supply prosperous automakers such as Mercedes, BMW, and Hyundai, deserve the same?

“We will not take up much of your time, but I did bring several Lear employees who deserve to be heard.”

The following statement can be attributed to Letasha Irby, who has worked at Lear’s plant in Selma, Ala., since 2006:

“Good morning. My name is Letasha Irby. I am proud to be one of the people working to form a union at our plant in Selma, Alabama. There’s no doubt that by now you know my story, and the story of my co-workers. We have done dangerous work at low pay for years.

“I am not here to debate whether the Selma plant is safe. I know what our doctors tell us. I see the medications my co-workers have to take to treat their asthma. I’ve read what OSHA has said, and researched how a safe, efficient foam plant is supposed to operate. No matter how much management tries to scare us, or mislead us, or play games with the facts, I’m confident the truth is on our side.

“I’m here to remind you of one thing. The workers in Selma are people. Human beings. Children of God. We are not pawns in some game. We are not trying to hurt the company. We are not troublemakers. We want to work. We want to earn a decent living. And at the end of our shift, we want to come home safe. I am a mother of two young children. I want to be healthy and well as they grow up. I don’t want to be a burden on them when I am older. I want to be able to give them the very best. In that way, I bet I’m a lot like all of you. We all want the best for our families, and we’re all willing to do what it takes to get it. That’s why I’m still standing up, speaking out and coming together with my co-workers to call for better jobs at Lear in Selma, even after a year.”

The following statement can be attributed to Alfonzia Richardson, who has worked at Lear’s plant in Brookwood, Ala., since 2014:

“Good morning. My name is Alfonzia Richardson. I work at Lear in Brookwood, AL, and like Letasha, I am working hard to form a union at our plant. It’s a new plant that many in our town thought would bring good jobs – jobs that would allow us to support ourselves and our families, and help boost the local economy.

“But that’s not the reality: Our pay starts at just $13.50 an hour. I’ve worked in the auto industry almost my whole life, that’s just a fraction of the pay that other workers, doing the same job as us, have been able to win through a union contract at Lear plants across the country. We’re making seat parts for luxury cars sold by Mercedes, but we’re getting paid barely more than we would make at Walmart.

“What’s even worse is that our jobs involve back-breaking work. Our plant has been open for just over a year, but some of my coworkers have already needed physical therapy or even surgery for stress injuries. We have many parents at our plant who can’t get time off to care for themselves or their families. We’re getting used up for low pay.

“Hearing from others who work at Lear plants across the country, it’s clear that our problems are not unique. Lear can afford to provide the good jobs that we deserve and that our communities need, and we’re going to continue standing together until the company listens.”

The following statement can be attributed to Jeff Brown, who works at Lear’s plant in Rochester Hills, Mich., and is a member of UAW Local 5960:

“Good morning, my name is Jeff Brown. I am the shop chair at the Lear plant in Rochester Hills, MI, and a proud member of UAW Local 5960. It’s true that at Lear’s unionized plants, workers have made many positive changes. We’ve worked together to make these plants safe, efficient, and productive. We’re proud of the quality of the products we make.

“But over the past year, my co-workers and I have had to work harder than ever to protect these good jobs. If Lear had its way, many of the jobs building a seat wouldn’t be done in my plant, or Hammond, or Nevada Street, but outsourced to other companies where workers struggle to get to even $10 an hour.

“Yes, these jobs would be in the United States. But the fact is, they would have more in common with jobs in fast food or at Walmart than with the manufacturing jobs that build the American middle class. Is that the future we want for ourselves? For our children?

“My co-workers at Lear—at my plant, in Hammond, Indiana, and here in Detroit—fought hard for what we won this past year. We’ve learned a lot about what’s happening at other Lear plants, too. It’s unacceptable. These workers are our sisters and brothers, too, and we plan to stand with them until they have what they deserve, too.”