Will the “new” NAFTA work for US?

The UAW has one goal: support the U.S. worker in all aspects of their professions. That includes involvement in U.S. trade policy decisions where our overarching focus is creating good paying U.S. jobs —  now and in the future.

Currently, more than 900,000 people work in the auto and auto-parts manufacturing sectors alone. This has a far-reaching economic impact going beyond the shop floor. The Center for Automotive Research estimates that every assembly plant job supports an additional 9 to 12 jobs in the United States. The effect continues into our communities. Automakers, suppliers, dealerships, and the local businesses that support them are responsible for more than 7.25 million jobs.

That’s why any trade agreement our country enters into must always focus on the U.S. worker, and keeping and creating good jobs here.

Let’s take a look at where we are right now. The renegotiated North American Free Trade Agreement (NAFTA), also referred to as the United States-Mexico-Canada Agreement (USMCA), is under discussion in the halls of Congress. Since its passage 25 years ago, NAFTA’s U.S. trade deficit with Mexico has cost hundreds of thousands of manufacturing jobs.

Weak labor laws and lax environmental standards that have been credited with creating a permissive ‘dump’ for companies looking to avoid stronger U.S. standards, have resulted in American companies investing billions in manufacturing south of the border. 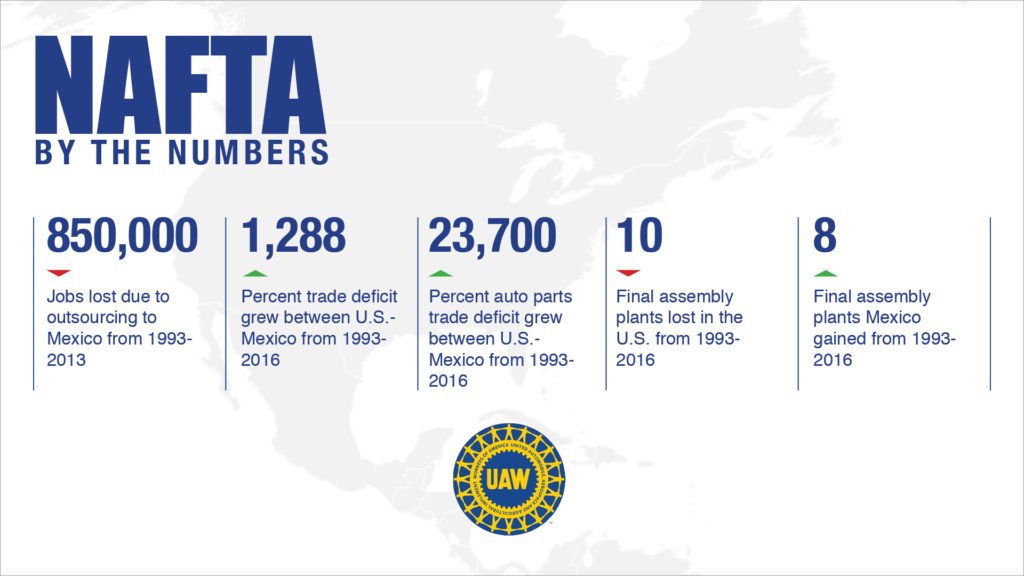 The “new NAFTA” looks like a win for big industry — oil, pharmaceuticals and gas — but it won’t make a meaningful difference for our citizens or our workers. It won’t stop the shifting of auto production to Mexico and beyond.

Since its implementation, NAFTA has devastated American workers and their communities. Economists estimate between 1993-2013, more than 850,000 U.S. jobs were lost due to outsourcing to Mexico. Between 1993-2016, the U.S.-Mexico auto trade deficit grew 1,288%, and the auto parts deficit exploded by 23,700%. Over the same period, the U.S. lost 10 final assembly plants, while Mexico gained eight.

That isn’t an agreement working for U.S. The new agreement — as currently
written — does not go far enough to make it a good deal for working families.

More importantly, the IMF predicts that the new Rules of Origin requirements will “lead to a decline in the production of vehicles and parts in all three North-American countries.”

In addition, the U.S. International Trade Commission (ITC) estimates that the “new” NAFTA will only create a net gain in the auto industry of 28,100 full-time jobs. In fact, the ITC estimates that there will be a 1,600 decrease in auto assembly jobs. Auto parts jobs will only increase by 29,700 jobs. That’s a far cry from the 682,000 American jobs lost (nearly 80% in manufacturing) between 1994 (when NAFTA was signed into law) and 2010. Moreover, foreign investment in Mexico increased 150% since NAFTA.

The ITC also estimates that price increases will cause a decline in auto sales and an increase in U.S. imports from outside North America.

EVs and AVs — Will the work be here?

Add to that, the real risk that as the world moves to the next generation of
automobiles — electric and autonomous vehicles — that the U.S. is losing its technological leadership. Most advanced automotive technology production is already overseas. Today, the U.S. only produces 13% of the world’s semiconductors. By 2021, the U.S. will produce only 14% of the world’s lithium-ion batteries. These batteries are needed to make electric cars.

It’s clear: NAFTA has been a failure and has not lived up to the promise of keeping middle-class auto sector jobs in the United States. It has instead incentivized companies to offshore jobs and has created a severe trade deficit with Mexico. Last year’s devastating announcement by General Motors that it is closing four plants impacting 14,000 jobs in the United States, only heightens our concerns that this trade imbalance must be addressed to benefit U.S. workers over the short and long term.

And it bears mentioning here that failing to protect American jobs is certainly not the only problem with this agreement. Just as it incentivizes U.S. automotive companies to ship jobs to Mexico and China, it’s a gift to Big Pharma as well.

USMCA would forbid Congress from curtailing Big Pharma’s patent monopolies on some of the world’s most expensive drugs. In simple terms, it would lock in high drug prices on many necessary and life-saving prescriptions.

So, the new NAFTA is definitely not looking like a solution. We must go back to the negotiating table with Mexico and Canada.

We need — and demand — a trade policy that benefits U.S. workers instead of CEO’s, who like NAFTA just the way it is for the sake of the bottom line.