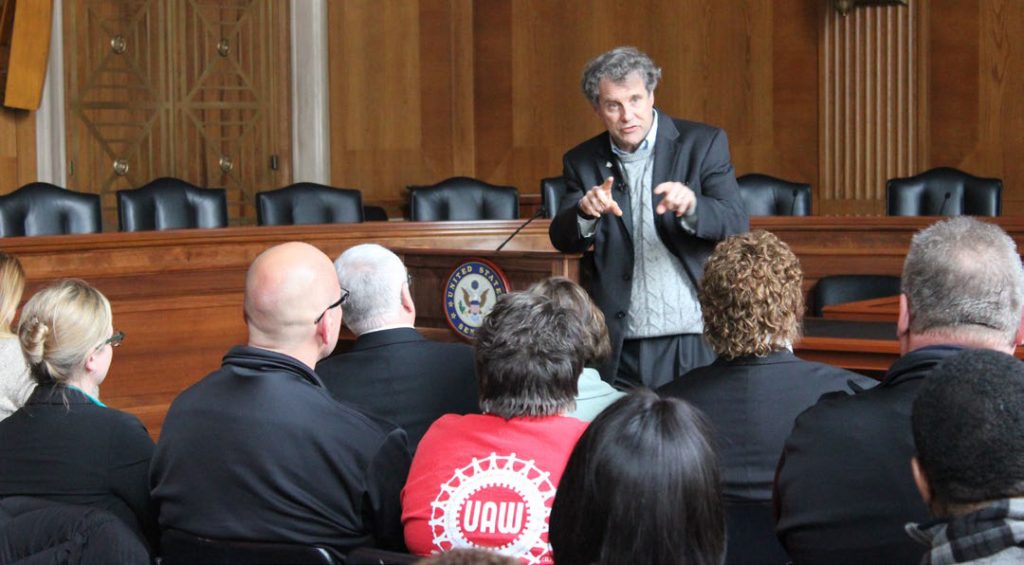 COLUMBUS — Today, the United Auto Workers (UAW) endorsed Senator Sherrod Brown for reelection to the U.S. Senate. UAW Region 2B represents 150,000 active and retired members in Ohio. Director of Region 2B, Presidents of Locals 1112, 70, 863, and 12 issued the following statements announcing the UAW’s endorsement of Senator Brown.

“American workers are the engines of growth in our country, but their hard-earned wages don’t go as far as they used to. Sherrod Brown recognizes that we need to invest in our workers and restore the value of work in our country — which is why we’re proud to support his reelection to the U.S. Senate. Sherrod earned our endorsement because of his leadership in helping save America’s auto industry, his principled stands against unfair trade deals that undermine Ohio’s manufacturing sector, and his advocacy for all workers. The UAW, Ohio and this nation are better off because of Sherrod’s service.”

“UAW is proud to endorse Sherrod Brown’s reelection to the U.S. Senate. A few years ago, when our auto industry’s future was in doubt, it was Sherrod who stood with us. Together, we saved a sector that employs 848,000 Ohioans. We’ll never forget Sherrod’s loyalty, or the fact that his opponent would have turned his back on us. Now that Josh Mandel is running again, it’s important to remember that he called the auto rescue ‘un-American.’ At a time when American manufacturing is under siege, we need a leader to look out for our working men and women. Sherrod Brown is that leader.”

“Senator Sherrod Brown is on the side of workers, which is why the UAW is proud to have his back and endorse his reelection to the U.S. Senate. When so-called ‘right-to-work’ laws came to Ohio, he was on the front lines with firefighters, police officers, and organized labor to successfully overturn them. He’s worked hard in the fight against unfair trade deals that stack the deck against American workers. He championed the auto-rescue that helped save thousands of jobs and businesses that supply parts for the industry from Wall Street’s reckless behavior. Senator Brown has always been, and continues to be committed to doing what’s best for Ohio, and we look forward to helping him win another well-deserved term in the Senate.”

“We’re proud to endorse Senator Sherrod Brown for reelection. He has always stood shoulder to shoulder with Ohio’s working men and women, no matter how tough the fight. When the Great Recession threatened auto workers’ jobs and their families’ futures, Sherrod was in the trenches with us. Ohio’s auto industry has come a long way with the support and tireless work of Senator Brown. United Auto Workers of America proudly support Senator Sherrod Brown.”

“Sherrod Brown is a man of integrity, and he’s proven that to our union throughout his career. We’ve seen him not only withstand intense pressure to support unfair trade deals, but also call-out presidents of his own party when he thought their policies would hurt Ohio workers. Josh Mandel is no friend to Ohio’s working men and women. Time and time again, he’s sided with lobbyists and corporate interests over our families.”