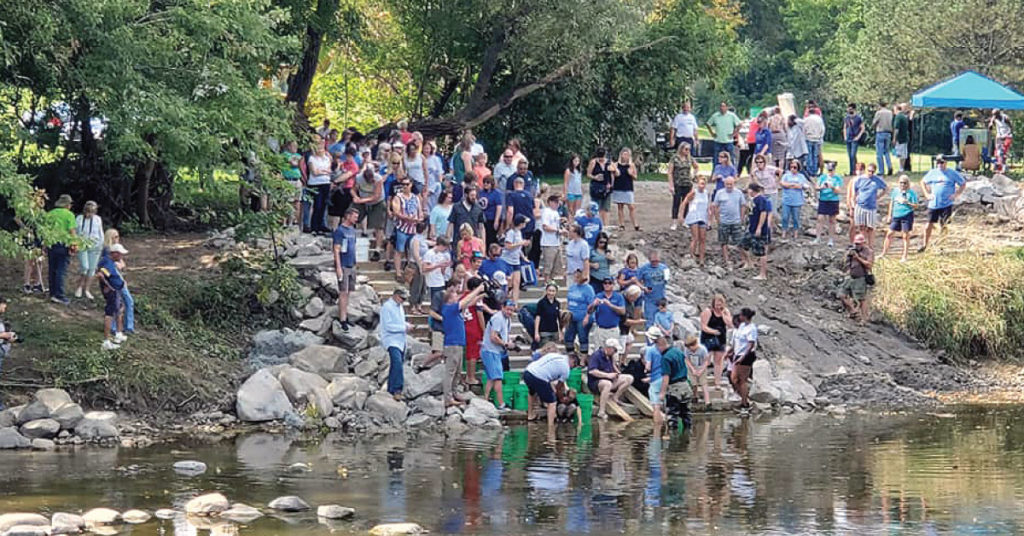 The funds, along with a matching grant from the Michigan Economic Development Corporation (MEDC), helped fuel the creation of the new Paddler’s Landing public access in Mott Park Recreation Area in Flint.

The new structure is part of an on-going, large-scale revitalization project driven by the city of Flint, Corridor Alliance Chapter (CAC) of the Flint River Watershed Coalition and other stakeholders to benefit local residents, area businesses and visitors.

Historically, river access here has been difficult. Within the city, water follows a concrete channel that provides no access, while the park’s rocky banks are not easily negotiated. It’s one reason project supporters feel the park, which draws fewer than 5,000 visits per season, is greatly underutilized.

“With the new landing and the future completion of the Riverfront Restoration project in downtown Flint, we expect this number to grow significantly,” said CAC manager Sarah Scheitler.

A wide concrete stairway, bordered by protective boulder rip-rap, the Paddler’s Landing structure offers safe access to and from the river, even when water levels fluctuate. It includes a wooden-rail watercraft slide, as well as a transfer seat and step system to allow those with limited mobility to safely access the water.

“As part of our official ribbon-cutting ceremony Sept. 21, participants released 100 young lake sturgeon supplied by the DNR,” said Scheitler. “There were dozens of people, young and old, standing on the access during the release. After all the work everyone has done, it was both exciting and gratifying to see how easily and safely people could reach the water’s edge.

“Until the UAW made this connection for us, we had not had a relationship with the USA,” Scheitler noted. “And we were amazed by their ability to raise funds. The group’s $7,000 donation essentially became $14,000 with the matching MEDC grant, which was a bit more than 10 percent of the total project budget. It was a substantial donation with which we were thrilled. And we’re eager to work with the USA again on future projects.”

Though the landing is already in use, one final piece remains to be placed, according to UAW Local 659 community service representative and CAC board member Dale Snyder.

“Under the USA’s Work Boots on the Ground program, our UAW local is proud to be part of this fabulous project,” he said. “As soon as possible, union volunteers have plans to fabricate and install a metal handrail along the downstream side of the stairway.”