Unifor-UAW Statement on Auto and the Re-negotiation of NAFTA

The Potential for Fair Trade in an Essential Industry

The North American auto industry remains a powerhouse of advanced manufacturing, innovation and economic activity. Directly responsible for 2 million jobs across North America, the auto industry serves as the anchor for entire supply chains including: auto parts producers, suppliers of raw materials and service providers (1). The economic activity generated by the industry supports local business and public services, as each auto assembly job creates in the range of 9 to 10 other jobs across the economy (2). These are often good jobs with above average wages which for generations have provided workers with stability, a strong standard of living, and hope for a better life for their families.

As one of the world’s most valuable industries, global auto exports reached $1.3 trillion last year, representing 8% of all merchandise exports (3). The industry is highly influenced by trade rules which shape where, and how, the sector develops. The auto industry is highly prized as far as economic development is concerned, and nations around the world enact strong trade policies to support domestic development and production.

Our two unions represent 245,000 workers in the North American auto assembly and parts supplier sector. Combined we have more than one million auto industry retirees. Our members work hard, and are proud of their work. It is their effort and skills that built the successful world-leading industry, which is so essential to the wider economy and serves as the backbone of hundreds of communities. We would have welcomed the participation of representatives from Mexican free trade unions in the auto sector but there are none that can speak for Mexican workers – and that is at the core of the problem.

Supporters of the status quo try to explain away the simple fact that NAFTA has failed workers in all three countries. While overall trade volumes and corporate profits are up, wages in all three countries have remained largely stagnant (4). Too often workers are not compensated fairly for their work (5). The fundamental right to collectively bargain is under regular attack in the U.S., threatened in Canada, and essentially non-existent in Mexico; resulting in falling union density falling and rising economic inequality across North America (6).

No amount of spin can erase the fact that NAFTA cost hundreds of thousands of jobs and the closure of thousands of U.S and Canadian manufacturing facilities. NAFTA renegotiations will only be successful if they lead to higher wages in all three countries, reverse crippling trade deficits with Mexico, and create new manufacturing jobs in the U.S. and Canada. Using the Trans Pacific Partnership as a model and/or making minor “tweaks” or slight “modifications” will fail to accomplish any of these goals.

Since the signing of NAFTA, U.S. and Canadian vehicle and auto parts trade deficits with Mexico have grown dramatically. In 1993, the U.S. had an automotive trade deficit with Mexico of $3.5 billion dollars (all figures $USD). By 2016, that deficit had grown to $45.1 billion. For auto parts, the situation is significantly worse. In 1993, the U.S. had a very small auto parts trade deficit with Mexico of $100 million. By 2016, it was 200 times larger at $23.8 billion (7). In terms of Canadian trade with Mexico, the overall automotive deficit has increased four-fold from $1.6 to $8.7 billion dollars under NAFTA. In contrast to the situation concerning Mexico, auto trade balances between Canada and the U.S. have remained relatively stable, and the U.S.’s modest deficit with Canada has declined by 23% since 1993 (8). 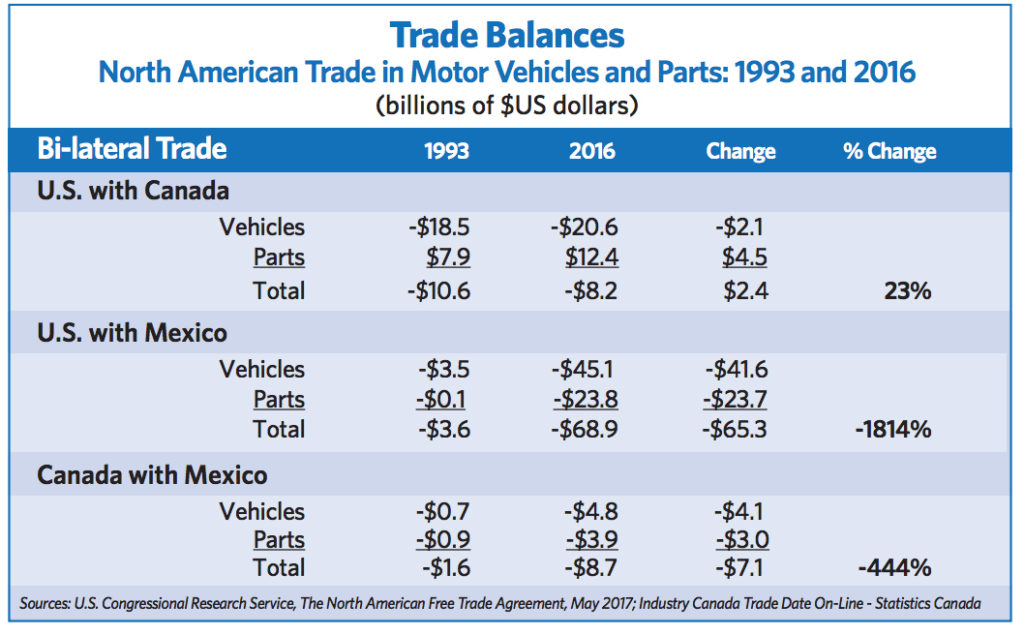 Auto trade within NAFTA should not be considered in isolation. As a region, North America has persistent and growing automotive trade deficits with other key auto-production regions including Japan, South Korea, the E.U. and increasingly China. The 4.9 million non-NAFTA vehicles imported annually into the region account for 24 per cent of sales in the North American market – that’s a level of imports forty percent higher than the EU, far higher than South Korea, at least twice as large as Japan and well above China’s five percent imports (9). Part of the explanation is in the fundamentally weaker tariff lines for North American bound vehicles and parts, combined with fully effective non tariff barriers elsewhere that serve to limit foreign imports. This broader imbalance in global auto trade adds to the urgency to address the failures of NAFTA, and set North America on a path toward greater overall balance in trade with other regions.

Lopsided Production Set to Get Worse

The growing imbalance within NAFTA is also reflected in each country’s share of production. Tariff-free continental integration has provided enormous benefits to the industry and shareholders, but the promise of liberalized trade at its core is hinged on all parties getting a fair share of the benefits. That has not happened.

Over the first dozen years of NAFTA new production facilities were added relatively evenly across the three NAFTA countries. This was primarily due to foreign-based auto manufacturers adding production capacity in the region. However, in the last decade a different trend emerged. Production capacity was eliminated in the U.S. and Canada, and added in Mexico. Over this period the U.S. witnessed a net loss of 10 final vehicle assembly plants (representing 17% of the total), Canada lost 4 plants (29% of the total), while Mexico nearly doubled the number of plants, gaining 8 (an increase of 89%) (10).

We have every reason to believe Mexico’s auto industry will continue to grow. Auto production in Mexico is up from 2 million cars and light trucks in 2008, to 3.6 million today. Production is expected to hit five million units by 2018. Mexico is now the world’s fourth largest auto exporter, behind Japan, Germany, and South Korea (11) . More than 80% of Mexico’s exports come to the U.S. and Canada. Almost every major automaker has increased or plans to increase capacity in Mexico and has opened new plants or has announced plans to do so.

Higher Wages and Stronger Labour Standards are the Key

The average autoworker in Mexico makes around $3.95 an hour, with many making well below that amount despite booming profits and record growth for the industry (12) . Mexican wage levels in auto, as elsewhere in manufacturing, have stagnated in real terms in Mexico since NAFTA.

Labour standards are important not just from a human rights perspective but also from an economic one. Poor labour standards have a real economic impact as companies relocate to take advantage of workers who lack basic rights and are underpaid. Workers in Mexico are often put in harm’s way for exercising their most basic rights.

Manufacturers in the U.S. and Canada have routinely implied for decades that they will move operations to countries with lower wage and benefits standards to derail union organizing drives, and limit wage gains. Repressive policies and “protection” unions – the Mexican equivalent of a company union – keep workers from organizing in a meaningful way, maintaining wages and working conditions at their lowest levels. When workers try to form their own independent unions, they are met with repression and even violence.

The U.S. State Department’s Mexico 2014 Human Rights Report concludes that the government did not consistently protect workers’ rights in practice (13) . The 2016 Human Rights Watch report on Mexico highlights the fact that “The dominance of pro-management unions continues to obstruct legitimate labour-organizing activity. (14)”

Mexico’s general failures to enforce labour and other laws have left workers without real recourse regarding violations of freedom of association, working conditions, or other problems. Despite this realization, NAFTA does not provide any adequate way to address these abuses, in turn encouraging them.

Mexico has been undertaking labour reforms and it is too early to tell if they will have a real impact in improving workers lives. Labour reforms that looked promising in the past failed to deliver the changes workers need. We hope history will not repeat itself but would be naïve to assume after 23 years of inaction under NAFTA that they will succeed in making real changes.

It’s essential for auto workers in the United States and Canada to not be persuaded by those who wish to portray Mexican auto workers as the problem. Workers in every country have the right to develop their economy, advance social conditions, and to seek a higher standard of living. But for far too long successive Mexican governments have failed to protect and advance workers’ fundamental rights and auto companies have been all too willing to reap the windfall of repressed wages and weak standards. The future of North American auto workers is already intertwined, and the best prospect for making gains is to raise conditions for all.

Although the focus of this joint statement is on the auto industry, trade agreements are far-reaching. We have many shared concerns affecting members in other sectors, and on wide-ranging issues under re-negotiation that affect whole economies. Our concerns include the need to eliminate Chapter 11 investor-state dispute settlement, strengthening environmental standards, addressing currency manipulation, enacting better procurement policies, tax fairness, infrastructure spending, immigration policy, cultural protection, and agricultural policies, among others.

The re-negotiation of NAFTA affords new opportunities for international solidarity and making real progress for all workers. We will continue to engage with our governments, civil society partners and allies to ensure that trade policy is geared toward mutual gains, the expansion of rights and sustainable economic development.

Modern trade agreements aim to pit workers against one another by design, with progress for none the assured outcome. Auto workers in the United States, Canada and Mexico must collaborate to ensure that the re-negotiation of NAFTA is an opportunity that delivers gains for all.