On May 10 workers at Volkswagen in Chattanooga, Tennessee, confronted VW leadership at their annual general meeting in Hanover, Germany, to tell VW to stop union busting. You can help support Chattanooga VW workers like UAW Local 42 President Steve Cochran who spoke up at that meeting.

The plant is VW’s only plant without a company-recognized employee union even though more than 70 percent of the skilled-trades workers voted to join the UAW. VW Chattanooga won’t bargain with them even though the federal government told them to. “With its behavior, Volkswagen violates its own principles of social responsibility as well as the global framework agreement with IndustriALL,” said Cochran. “VW management is disregarding fundamental labor rights, U.S. labor law and its own code of conduct. It risks a massive damage of its own image,” said UAW Secretary Treasurer Gary Casteel. “Workers in Chattanooga have voted for union representation yet Volkswagen continues to deny them their legal right,” said IndustriALL General Secretary Valter Sanches. 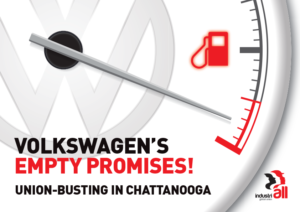 Now it’s your turn to speak out in support of the VW Chattanooga workers and their right to a union that the company will recognize and bargain with. Take a selfie with this poster, tag IndustriALL and the UAW and share it far and wide with your social media connections. Support Steve Cochran and all of his co-workers at VW: Tell Volkswagen to recognize the union in Chattanooga!