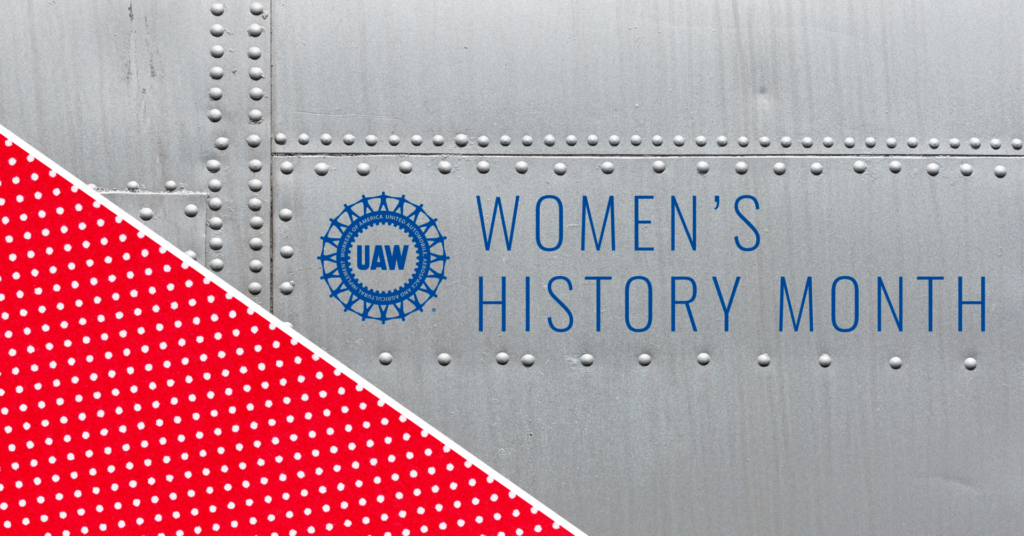 March is Women’s History Month. From the sit-down strikes of 1936-37 through the war years of Rosie the Riveter, from the postwar fight for jobs to today’s campaigns for pay equity and safe workplaces, women have played a key role in UAW history. Side by side, women and men are building a stronger union every day. We salute UAW women everywhere. Here’s the story of one noteworthy UAW woman:

Millie Jeffrey was a long time union and political activist who became the first director of the UAW Women’s Bureau in the mid-1940s.

Jeffrey worked as an organizer for the Amalgamated Clothing Workers of America in the 1930s. She went undercover into garment factories and helped organize formal groups that demanded better wages and safer workplaces from owners and management. Her work in the labor movement brought her to Washington during World War II, when she served as a consultant to the War Labor Board. It was there that she met Walter and Victor Reuther who appointed her to head the newly formed UAW Women’s Bureau, the precursor of the UAW Women’s Department.

She organized the first women’s conference of the UAW to deal with the flood of returning veterans that forced postwar layoffs of women from factory jobs. In the early 1970s, she helped found the National Women’s Political Caucus, a group that would go on to help dozens of women achieve political office. In 1975, she chaired a Democratic National Committee task force that rewrote national convention rules to ensure that half the number of delegates in attendance in 1980 would be women.

Read more about the women who helped build a strong UAW in the March-April edition of Solidarity Magazine.