March is Women’s History Month. From the sit-down strikes of 1936-37 through the war years of Rosie the Riveter, from the postwar fight for jobs to today’s campaigns for pay equity and safe workplaces, women have played a key role in UAW history. Side by side, women and men are building a stronger union every day. We salute UAW women everywhere. Here’s the story of one noteworthy UAW woman: 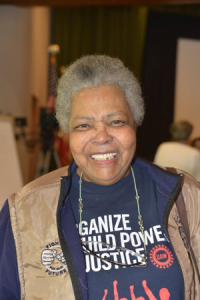 Dottie Jones began her career in the labor movement in 1966 when she became a member of Local 630 and served as chief steward. She developed training programs for minority and female union members at the University of Michigan’s Institute for Labor and Industrial Relations. She went on to become assistant director of the UAW Women’s Department and the assistant director of the UAW Retired and Older Workers’ Department. In 1996, President Steve Yokich appointed Jones to serve as an administrative assistant in the President’s Office – a first for an African-American woman. She continued to hold this position under President Ron Gettelfinger until she retired in 2003.

Jones served on several boards and commissions, including the Michigan Women’s Commission; the National Association of Commissions for Women, and the Michigan Task Force Against Sexual Harassment whose work resulted in the amendment of Michigan’s Elliott-Larson Civil Rights Act to include sexual harassment as illegal behavior. She was named one of 25 Outstanding Black Women in Michigan in 1985 received the Feminist Achievement Award, and the Walter Reuther Distinguished Service Award. Jones currently serves on the Council 1 Board for Blue Cross/Blue Shield and she serves her union as a member of UAW Region 1A’s Women’s Council and UAW Local 372.

Read more about the women who helped build a strong UAW in the March-April edition of Solidarity Magazine.