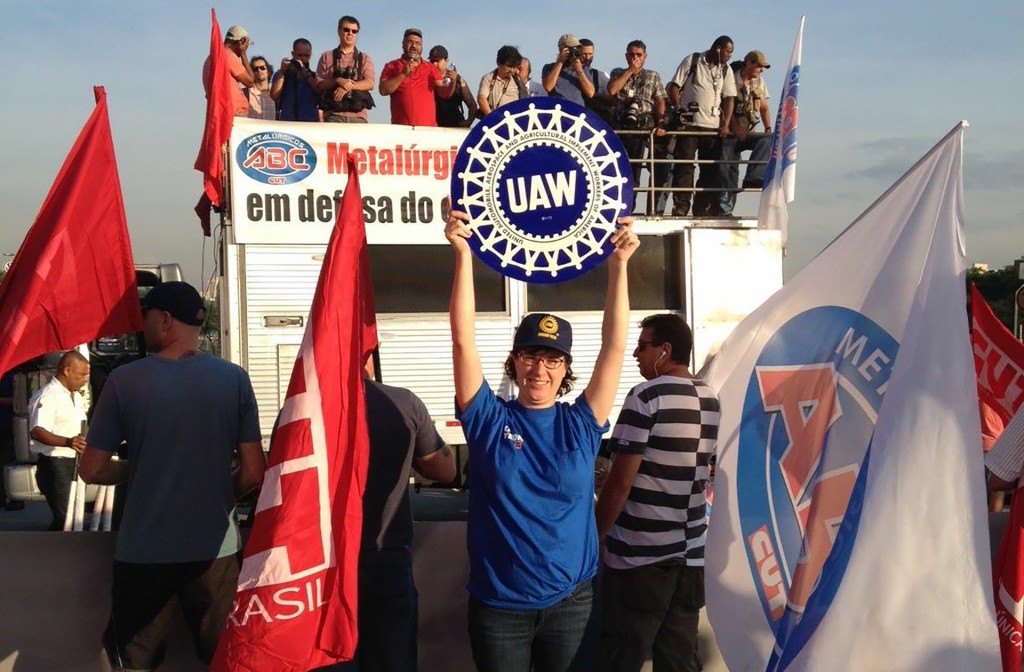 Our immigration system is broken. The current system does not work for either native-born workers or immigrants. Instead, it gives unscrupulous employers a tool to create fear and division, depressing wages and weakening labor standards for all workers. Individuals seeking to immigrate to the United States face a slow and often arbitrary process that divides families and keeps out workers whose skills and commitment to our country would benefit us all. Out of fear of being deported, undocumented workers have little recourse when employers break the law.

Difficult economic times often lead to a search for scapegoats, and not surprisingly the last few years have brought a wave of anti-immigrant legislation at the state level. Arizona led the way with its notorious anti-immigrant law, SB 1070, which passed in 2010. Since then, at least 13 other states have either considered or adopted copycat legislation. These laws encourage racial profiling, hurt children and families, and erode workplace rights by increasing the level of fear among immigrant workers. The UAW strongly opposes these efforts.

Last year, the U.S. Supreme Court struck down important parts of Arizona’s law, reaffirming the principle that immigration policy is a federal, not state, responsibility. Unfortunately, the decision left intact the law’s notorious “show us your papers” provision, which requires police to determine the immigration status of anyone they detain if there is “reasonable suspicion” that they are not in the United States legally.

Many myths surround the issue of immigration, and it’s important for UAW activists to counter them with facts:

Myth: Our country is being flooded with illegals.

Fact: The number of undocumented immigrants living in the United States has been stable for several years and is down by almost a million from its 2007 level.

Myth: Immigration reform means giving up control of our borders.

Fact: Control of our borders is part of comprehensive immigration reform. However, the focus on walling off the U.S. border with Mexico is misplaced. The multi-billion-dollar border fence has been shown to slow illegal crossings by just minutes or sometimes a few seconds, and the Department of Homeland Security has abandoned plans for a high-tech “virtual fence” as a complete failure. In addition, a large percentage of undocumented immigrants (estimates are in the 40 percent to 50 percent range) enter the country legally, and then overstay their visas. Focusing exclusively on border control ignores this part of the problem.

Fact: It’s easy to fall into the trap of thinking that when an immigrant gets a job, it’s at the expense of a native-born worker. Fortunately, that’s not the way our economy works. Immigrants and native-born workers tend to apply for different types of jobs, limiting labor market competition; there is no correlation between immigration and unemployment levels. More importantly, the economy isn’t a zero-sum game. The goods and services that immigrant workers consume contribute to economic growth and create jobs for other workers. Most economic research shows that immigration actually has a small positive effect on the wages of American workers.

Bottom line: the issue isn’t the level of immigration; it’s the ability of employers to use fear and intimidation to deny workers a voice and undermine workplace rights here and around the world.

Myth: Immigrants are a burden on taxpayers.

Fact: Immigrants, including undocumented immigrants, pay taxes at the state, federal and local level. A variety of studies have found that immigrants contribute more in taxes than they receive in benefits from government programs. And immigration has been shown to have a positive impact on the finances of the Social Security system.

The Development, Relief and Education for Alien Minors (DREAM) Act

The DREAM Act applies to undocumented young people who were brought to this country before their 16th birthday. Although this is the only country many of them have ever known, there is no way for them to become citizens or legal residents under current law. The DREAM Act would change that by allowing young people who have displayed good moral character and demonstrated their desire to contribute to our country (through school completion and/or military service) to apply to stay here as permanent residents or citizens.

The DREAM Act is supported by the labor movement, military leaders and much of the faith community, but because of Republican obstructionism, it failed to pass in the 112th Congress. In response, President Obama took executive action and instituted a “Deferred Action Policy for Childhood Arrivals” that allows young people who would be covered by the DREAM Act to apply for legal permits to live and work in the United States for a period of two years without the fear of deportation. While the president’s order is a step forward, it is only a band-aid on the larger issues faced by DREAMers, their families and our country.

An Agenda for Comprehensive Immigration Reform

ACTION: Give friends, coworkers and neighbors the facts about immigration to dispel the myths.

ACTION: Urge Congress to pass comprehensive immigration reform to fix our broken system and create a pathway to citizenship for undocumented immigrants.