UAW Region 2B director to retire May 31 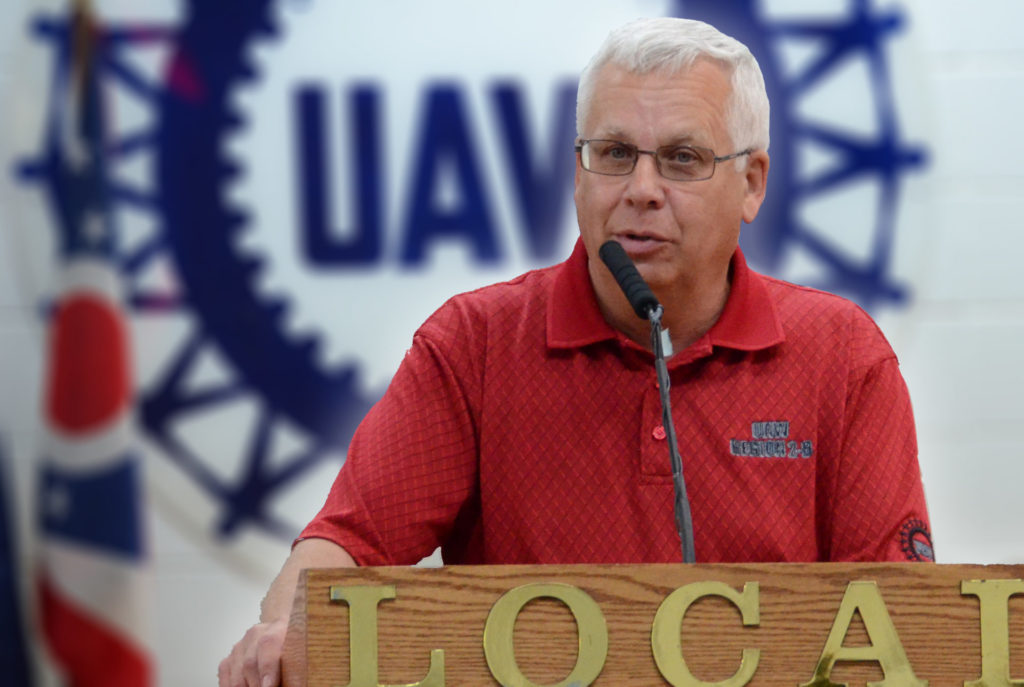 (Maumee, Ohio) – UAW Region 2B Director Ken Lortz announced his retirement effective May 31. Lortz, a member of the UAW International Executive Board, has served as Region 2B director since April 2009 when he succeeded Lloyd Mahaffey. He was subsequently re-elected at UAW constitutional conventions in June 2010 and 2014.

During his tenure, the UAW added Indiana to Region 2B and went through expansive growth during the post-recession auto recovery. Nationally the UAW has grown for seven consecutive years.

“It has been an honor to wake up every morning and fight for the benefits, safety and wages of Region 2B members,” Lortz said. “Together with our regional staff our focus has been on improving the lives of our members and retirees and building strong communities in Indiana and Ohio.”

Under his leadership, Region 2B has focused heavily on servicing member needs and building communities. “I’m proud of what we’ve accomplished through collective bargaining for our members and I’m equally proud of all the hours that Region 2B members have spent fighting for justice, raising funds for charities, building wheelchair ramps, volunteering to help the poor, the homeless and the less fortunate, and giving of themselves,” Lortz reflected.

Lortz joined the UAW in 1970 when he began working at Atlas Crankshaft in Fostoria, Ohio, and became a member of Local 336. From 1974 to 1993, he served Local 336 members in a variety of elected positions, including as president and chairman of the bargaining committee.

During that time, he also served as a medic in the Army National Guard from 1971 to 1977. In 1993, UAW President Owen Bieber appointed Lortz to the UAW staff as a servicing representative for Region 2B. He serviced northwest Ohio until 2002 covering assignments that included Independents, Parts and Suppliers, Technical, Office and Professional contracts, and National Chrysler Group LLC facilities.

In 2000, when workers at St. Vincent Mercy Medical Center in Toledo, Ohio, organized with the UAW, Lortz was assigned lead negotiator for the three units of nurses, technical and service employees. As lead negotiator of bargaining their first contract he oversaw substantial gains for St. Vincent workers including improved pension, wage and health benefits for the nearly 2,800 new UAW members.

Lortz has spent his life engaged with his community on several levels, including as a life member of the NAACP and the Coalition of Labor Union Women. He served on the board of directors for Camp Courageous, an organization that provides camping experiences and respite weekends for individuals with developmental disabilities. His community involvement also includes service on the board of directors for the Toledo Police Athletic League and as co-chair of the Governor’s Ohio Auto Industry Support Council, a service position he was appointed to by former Ohio Gov. Ted Strickland.

“I am humbled to have worked with, and learned from, many great leaders and members.  The UAW is the strong, stable, solid institution it is today because of the teamwork and leadership at the local and national level. We are stronger today and our members are benefitting from that strength at the bargaining table,” said Lortz.

Ken and his wife, Karen, have a son, two daughters and five grandsons. They live near Carey, Ohio, and are members of Our Lady of Consolation Parish and Basilica.

Fill out the online retirement card below and send your retirement wishes Ken’s way!

Statement of UAW President Rory L. Gamble on Implementation of the Nonpartisan Science-Based Approach of the Biden Plan to Reopen the Economy