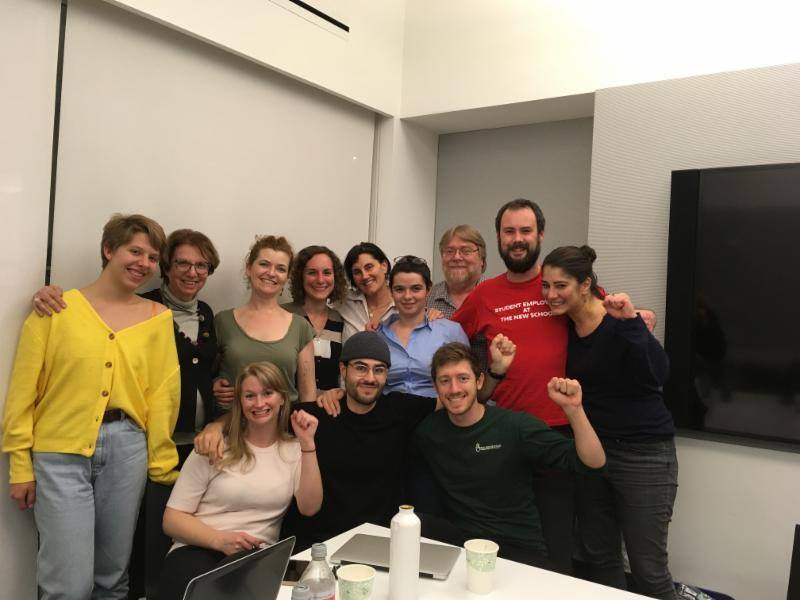 New York City– Tuesday evening, a tentative agreement was reached between Student Employees of the New School (SENS) UAW and The New School on behalf of 700 Academic Student Workers.

After fifteen months of bargaining, SENS UAW agreed to unanimously recommend this agreement to their membership in the following statement.  (https://www.facebook.com/SENSUAW/)

Highlights of the tentative agreement include higher minimum wage levels across all positions with annual increases thereafter, a full waiver of the University Services fee, a commitment to seriously look at childcare needs for all employees, a signing bonus of $300, and – for the first time – significant health insurance rebates for many workers.

In early 2017, SENS UAW members voted 500-2 for their union.  At that time, they received wages only, no tuition remission and no other economic benefits.  In addition to the economic gains in this tentative agreement, the Bargaining Committee was able to negotiate strong grievance and arbitration language, sexual harassment provisions and hiring and on-boarding procedures.

Voting to ratify the contract will begin the week of November 26thwith a unanimous recommendation from the Bargaining Committee to its membership to vote yes.

On the tentative agreement, UAW Region 9A Director Beverley Brakeman said, “The SENS UAW Bargaining Committee has worked tirelessly on behalf its members to significantly improve their work lives.”  Director Brakeman added that, “it has been an honor and a privilege to work with this bargaining committee on behalf of its members whose commitment and dedication to The New School make it the world class institution of higher education that it is today”.