UAW Legislative Conference Delegates Honor the Past; Focus on the Future 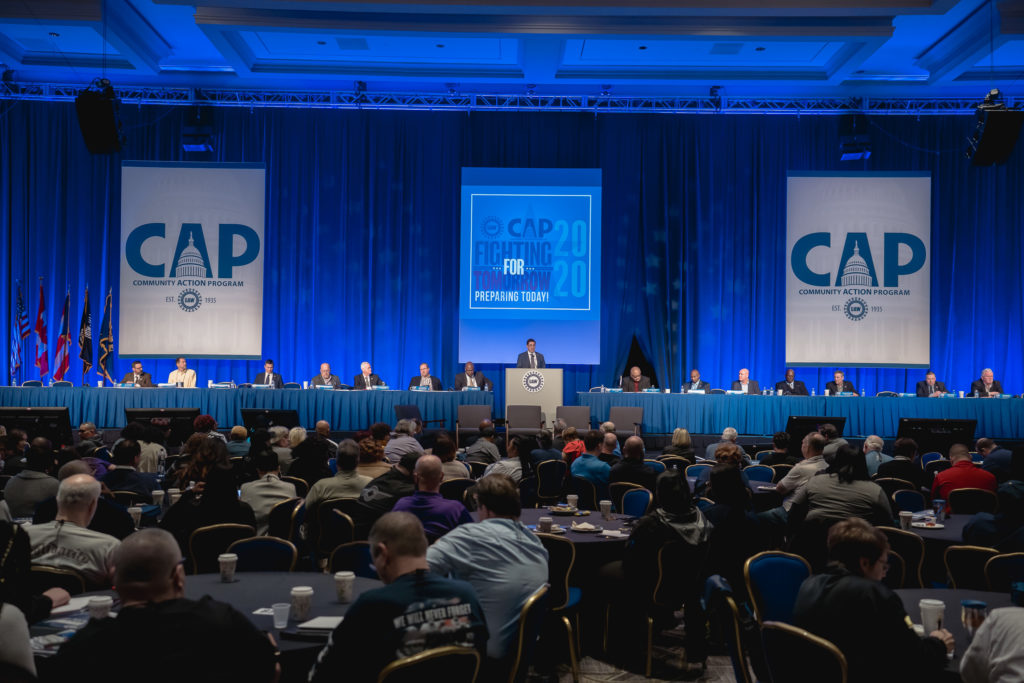 The UAW’s 2020 Community Action Program (CAP) Conference opened its second day with a moving video tribute to Black History Month, and the powerful relationship between the civil rights and labor movements.

Thea Lee, president of the Economic Policy Institute shared a message that connected economic inequality with the past three decades of injustice and crippling inequalities for working families. “The economy is less fair… not morally fair,” Lee said. “CEO pay at the top firms have risen 1,000% since 1979, while working families have seen a 12% increase and some families are working two or three jobs to afford health care, education and housing.

“Ninety percent of the people in this country are working harder. This is not a healthy economy for working families and it’s our job to figure out what to do next,” Lee said.

Josh Nassar, the UAW’s legislative director, gave delegates an overview of what happened in the first session of the 116th Congress and what the union will be fighting for this year. The House has passed many bills on a wide array of issues that benefit working families.

“These are bills that passed the House and we supported each and every one of them,” Nassar said. “So, what has the Senate done about it?”

More than 400 bills passed by the House have been held up by the Senate GOP leadership. Instead, the Senate has spent a great deal of its time in the first session ramming through anti-worker judges that President Trump nominated for the federal bench.

Nassar noted that the union will be closely monitoring the new USMCA trade agreement and remains leery of the hype surrounding it and its promised 250,000 added jobs in the auto sector.

“There is absolutely no data to support this,” Nassar said. “Plants are not going to be coming back from Mexico because of this agreement. That’s just not going to happen.”

Jon Cawthorne, dean of the Library System and School of Information Services at Wayne State University in Detroit, Michigan, talked about the university’s Walter P. Reuther Library. The Reuther Library is the largest labor archive in North America and is home to the collections of numerous unions and labor-related organizations.

CAP delegates also heard from Victor Reuther, Walter Reuther’s grandson, who announced that the Walter Reuther Humanitarian Award recipient is Congressman John Lewis, D-Georgia, a civil rights icon. Lewis, who was beaten at the Edmund Pettus Bridge in Selma, Alabama, in 1965 on what is known as Bloody Sunday, was honored for his life’s work. He organized sit-ins, braved violence and was severely injured by police during the historic march in Alabama. He continued that work as a lawmaker,  and is often referred to as “the conscience of Congress.”

“It’s no wonder John Lewis has been called the soul of the civil rights movement,” Reuther added. “Indeed, he has been a fierce guardian of our democracy.”

The day also paid tribute to the voices of women with a video featuring UAW women throughout the union. UAW CAP Director Melvin Coleman noted that “UAW women have made huge impacts in this organization, this country and their communities.”

The morning session ended with a panel discussion focused on seeing emerging technology as an opportunity to create good quality jobs with benefits for future generations.

Faber stressed the need to find ways to make sure that developing technologies for electric and autonomous vehicles does not result in massive job losses.

Lipman emphasized that technology to build electric and autonomous vehicles should include environmental productions.

Deveny told the group, “We want to make sure we bring back jobs first where jobs have been lost such as Lordstown,” he said, referring to the recent closure of a General Motors plant in Lordstown, Ohio.

The morning session ended with another reflection on Black History month and the work of UAW members and Martin Luther King.

“Let us always remember the work of Dr. King, and so many in this union, who sustained and changed America as a nation and our world,” said Coleman. “We should all be proud of the UAW’s role in this pivotal moment of our nation’s history.”