DETROIT, MICH. – The UAW International Executive Board (IEB) on Tuesday passed a resolution calling for the release of unjustly charged and imprisoned trade unionists in South Korea, including President Han Sang-gyun of the Korean Confederation of Trade Unions (KCTU) and KCTU General Secretary, Lee Young-joo.  Specifically, the resolution calls on the Government of the Republic of Korea to “rescind all sentences and drop all charges against trade unionists that are related to peaceful protest, including those against President Han and General Secretary Lee.” 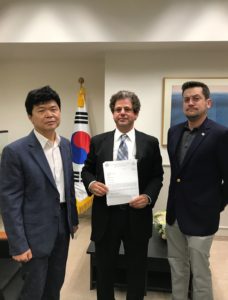 While the IEB was taking this action, representatives from the UAW went to the Embassy of the Republic of Korea and met with Employment and Labor Attaché Cho Ohyeon.  They delivered a letter from UAW President Dennis Williams to South Korean President Moon Jae-in calling for the release of President Han.  In November 2016, the UAW sent a representative to South Korea as part of a delegation that visited President Han in prison and participated in the demonstrations that became known as the “Candlelight Revolution.” Ever since, the UAW has been closely watching Han’s case as well as the scandal that led to the fall of President Park Gyun-hye and the election of President Moon.

Since December 2015, President Han has been incarcerated and General Secretary Lee has been under house arrest in KCTU headquarters. The charges against both related to organizing a public protest against regressive labor law reforms put forth by former President Park. Many other Korean trade union leaders remain incarcerated as well.

President Han’s career as a labor leader has included a successful campaign to organize a union in his auto manufacturing plant and a campaign that saved hundreds of jobs and won severance benefits for those whose jobs could not be saved.  His actions have included plant occupations, sit-ins and demonstrations. As the first elected president of the KCTU, Han mobilized workers against anti-labor legislation and government corruption in a series of peaceful demonstrations. The government of former President Park responded with police brutality, mass arrests and harsh sentences. The South Korean labor movement, global unions and civil society, led by Han and others, forced the impeachment and removal from office of President Park.

The UAW views the election of President Moon as a very positive development. Moon is a human rights lawyer with a history of fighting South Korea’s authoritarian governments. He has committed his government to human rights and labor rights. Releasing President Han, General Secretary Lee and the other unjustly charged and imprisoned trade unionists would show the world that President Moon’s government acts according the values that he has espoused throughout his career.