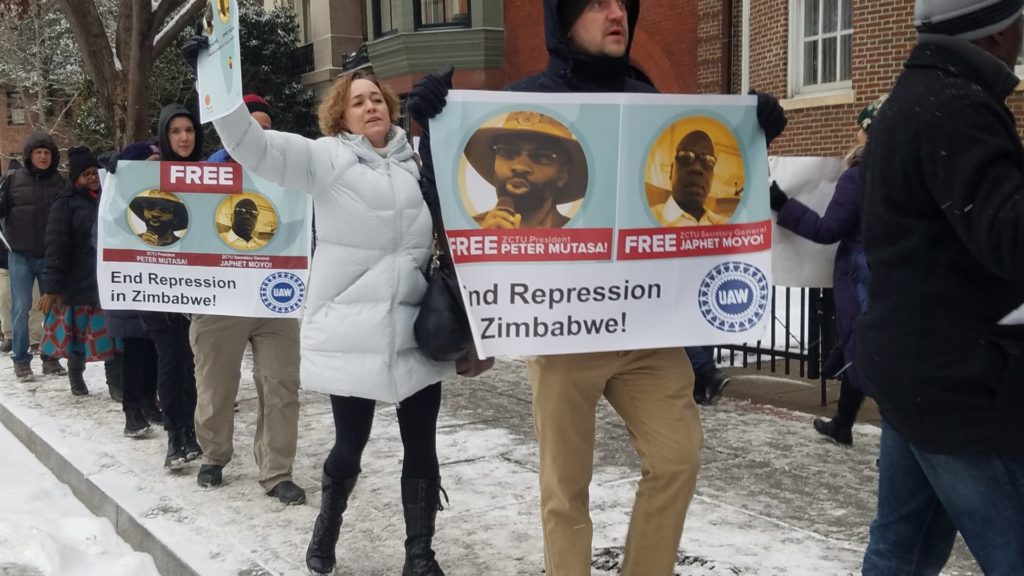 Peter Mutasa, President of the Zimbabwe Congress of Trade Unions (ZCTU) and ZCTU General Secretary Japhet Moyo were released on bail this week following strong demands from the UAW and others.  The two were arrested as part of the Zimbabwe government’s repressive response to the ZCTU’s “Stay Away” of January 14-16, 2019.  The purpose of the “Stay Away” was to demand a reversal of a fuel price increase that exceeded 200%. The price increase worsened an already unbearably high cost of living. Police and security forces violently attacked peaceful protesters.

According to the Zimbabwe Human Rights NGO forum, there were at least 844 human rights violations during the “Stay Away.” These included at least 12 killings, at least 78 gunshot wounds, at least 242 injuries from assault, torture, and inhumane, degrading treatment, and at least 46 cases of property destruction. Other violations included obstruction of movement, media freedom, and information access as well as privacy invasion. More than 1,000 people have been arrested since January 14. Many have been denied bail in violation of their rights. About 50 people who were convicted on charges of public violence did not have access to defense lawyers.

President Jones called on the government of Zimbabwe to:

In support of this call, the UAW along with other union activists protested at the Embassy of Zimbabwe on Friday February 1, 2019.  On Monday February 4, 2019 Mutasa and Moyo were released.

President Williams: Thank you, UAW members, for your election work