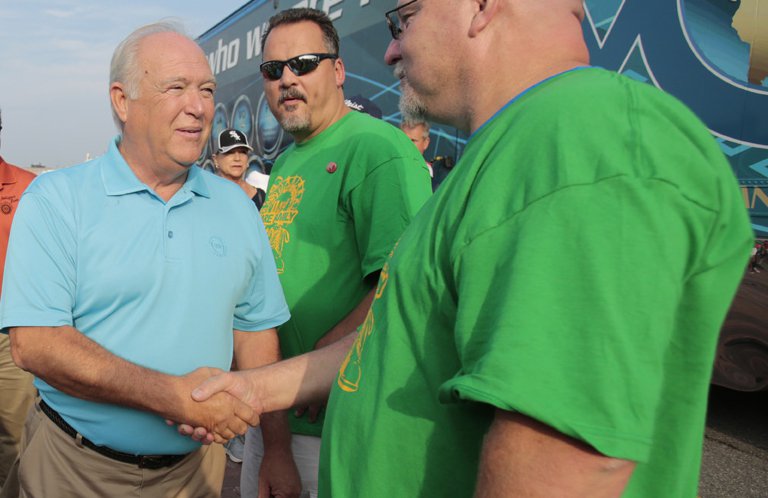 DETROIT, MICH. – The UAW today endorsed Hillary Clinton for president, citing her support for UAW members, her lifelong commitment to the job security of American families, and her ability to unify and win in November.

Now is a time for unity, a time to focus on what lies ahead in November. Bernie Sanders has brought to this campaign a dialogue that has been needed for far too long. He has been, and remains, a great friend of the UAW, and of working men and women in this country. But, the fact is, Hillary Clinton has shown under pressure her ability to lead and get elected in November.

The UAW’s directors went through the process of surveying and listening to members for input into the campaign season. “We are a family of over 1 million active and retiree members with strong opinions. Now, we have to choose between two very good UAW friends and move forward as a united membership,” said Williams.

Williams also noted that all candidates regardless of political party were sent questionnaires and none of the Republicans responded, including Donald Trump. Trump also had made public comments about wanting UAW member jobs to move to nonunion, low-paying states to compete with Mexican wages. “Mr. Trump clearly does not support the economic security of UAW families,” said Williams.

Hillary Clinton has a strong track record on issues of importance to UAW members. In 2009 she fought for preserving collective bargaining rights and stood up against attacks on collective bargaining when we needed her. She’s an advocate for expanding overtime rules to include more working families, she believes in equal pay, paid family leave, and quality, affordable child care.

As president, Hillary Clinton will empower a new chief trade prosecutor who will report directly to her and aggressively combat trade violations. She also will triple the number of trade enforcement officers and crack down on currency manipulation that hurts American workers.

A Hillary Clinton presidency will focus on collective bargaining rights and fair treatment of workers, including creating high standards for domestic sourcing and “buy American” laws. She also will create tax incentives for our hardest-hit manufacturing communities and support skills training for America’s workforce.

“For many reasons, the UAW supports Hillary Clinton as the best choice for our members and our nation in the November election,” said President Williams.