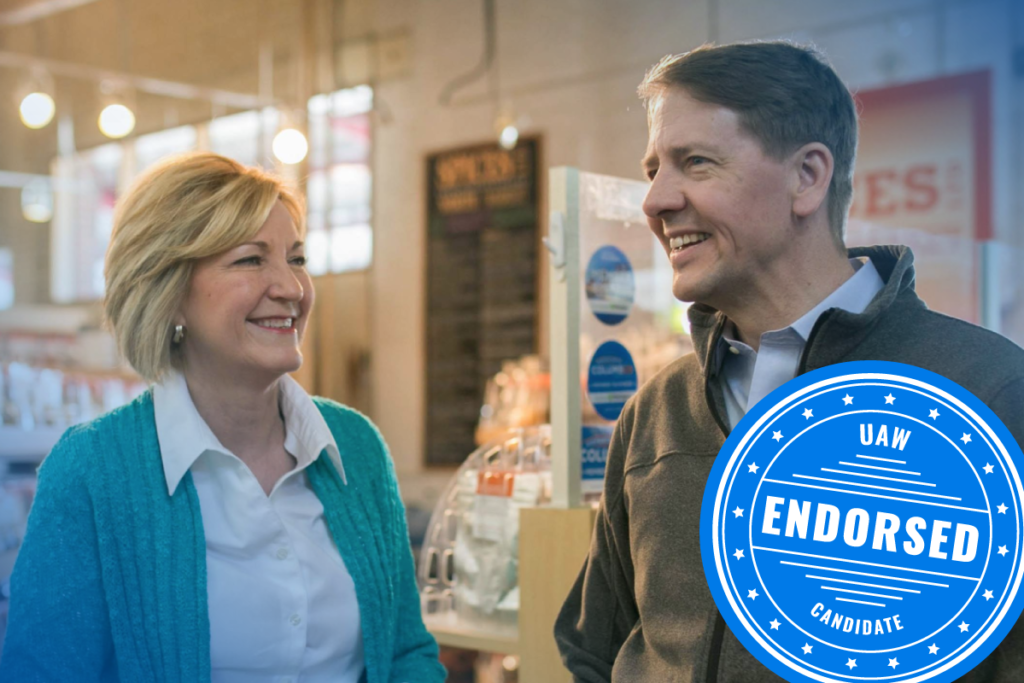 COLUMBUS, OH –Today at their annual conference, the United Auto Workers endorsed Rich Cordray and Betty Sutton for Governor and Lt. Governor of Ohio. Rich and Betty have been consistent advocates for workers throughout their time in public service.

Both Rich Cordray and Betty Sutton have a strong record of standing up for Ohio’s auto industry and its workers. As Attorney General, Cordray helped ensure that workers were protected during General Motors’ bankruptcy and restructuring. As a member of Congress, Sutton spearheaded the ‘Cash for Clunkers’ bill, which helped get the auto industry back on its feet, and workers on the assembly line, in the midst of the Great Recession.

“The UAW knows that Betty and I will stand on the side of workers — not the special interests who have run the show under Mike DeWine’s watch,” said Cordray. “And, they have seen firsthand our work delivering results for middle-class families. Our campaign is about making sure Ohioans have access to affordable care, can get the education and training they need, and have economic opportunity, no matter where they live in Ohio. I’m glad to have earned the support of the UAW in that fight.”

“I’m the daughter of a boilermaker and a library-clerk. I’ve spent my life fighting for families just like mine and I always have stood on the side of working people and organized labor,” said Sutton. “As Lt. Governor, I will fight the attacks on workers and working families across Ohio. UAW workers helped build our great state, and I’m proud that Rich and I have earned their endorsement.”

“Ohio needs a fighter for working families. Rich Cordray fought for Ohio families as Attorney General,” said Region 2B Director Rich Rankin. “He fought to protect us in Washington D.C. from powerful banks and CEOs. Rich Cordray and Betty Sutton have consistently fought for the auto industry and are going to fight for Ohio jobs.”

“When the General Motors bankruptcy threatened the Lordstown plant, and the livelihoods of thousands of Ohioans, Rich and Betty were there for us and helped keep countless people on the assembly lines, with steady paychecks that could support their families,” said Vice President Tim O’Hara. “That’s the kind of leadership that we need in Columbus right now: people that will stand up for working families, not the special interests. Rich and Betty are those leaders, and that’s why we’re proud to stand with them.”

“Rich and Betty understand that a good job is about more than a paycheck, it’s about the dignity of hard work and the ability to support your family and your community,”said Local 863 President Tim Meadors. “In office, Rich and Betty will stand strong against attempts to take away workers’ rights, and they’ll always put middle-class families first. We’re proud to endorse them to be Ohio’s next Governor and Lt. Governor.”

“During the darkest days of the Great Recession, Rich and Betty went to bat for the auto industry and Americans workers — saving thousands of good paying jobs and protecting communities across Ohio from economic devastation,” said Local 12 President Bruce Baumhower. “We’re supporting Rich and Betty because they’ll take that same approach in office, by standing up to the corrupt special interests that run the Statehouse and by working tirelessly to put state government back on the side of middle class families.”

“Working people in Ohio, and around the country, have been under assault by the big-money interests who seek to take away our right to collectively bargain, and all that we’ve accomplished in securing fair wages, safe workplaces, and a dignified retirement,” said CAP Chairman Bob McCarthy. “Rich and Betty will stand strong against the lie that is ‘right to work’, and they’ll be champions for the middle-class families who have suffered at the hands of corrupt interests in the Statehouse and in Washington.”