Walter P. Reuther is an icon and an American hero of the working class. For those of us at the UAW, there are almost no words powerful enough to describe what he means to this union and our members. And for me, as the current president of the UAW, I am so humbled and inspired by his vision, his life’s work, his tireless fight for human and civil rights and simply put, the example he set as an extraordinary human being.

Today, we mark the 50th anniversary of the plane crash that tragically took the lives of UAW President Walter Reuther and his wife, May. We had planned a commemorative tribute event in Detroit to mark this momentous occasion, but due to the  COVID-19 pandemic, we have had to postpone that celebration. But this crisis will not dim the light that we are committed to shine on Walter and May’s lives, their work and their memory.

In fact, perhaps it makes it burn all the brighter. In this terrible pandemic, our members

are still being safeguarded and protected by the founding principles that Walter negotiated and won for working men and women. And I know if he were with us today, he’d be on the front lines of this crisis, demanding that the workers of this nation — and the world — be considered and be safe in any workplace or community.  Personally, I take great strength in that.

Walter’s legacy endures in the strides made in collective bargaining, workplace safety, worker education and enhancement, healthcare, retirement and life balance benefits that changed the face and experience of employment. The impact of Walter Reuther’s passionate efforts on behalf of the American worker is immeasurable.

A vision for us all 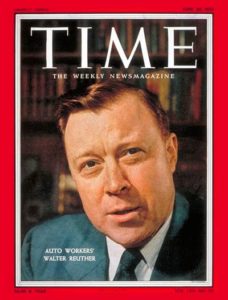 Seeing the labor movement as an instrument for advancing social justice and human rights, Reuther stands among the great leaders in our country’s history. Individuals who made this a society more equal for all. Reuther, who was named as one of Time magazine’s 100 most influential people of the 20th century, is considered a founding father of the great American middle class.

And with good reason.

In 1927, Reuther  joined Detroit’s booming automobile industry by landing a job at Ford Motor Company, eventually becoming a die leader. While there, he got an up close and personal view of how auto workers were being mistreated in plants. He experienced firsthand being a worker with no voice in his working conditions and was later fired because of his campaign work for a Socialist Party presidential candidate. By 1935, he contributed to the rise of the UAW by forming Westside Local 174 and becoming its first president. This was just the beginning of his lifelong commitment to helping all of our brothers and sisters succeed at work and in the community.

His efforts over the next few years to establish a strong union presence did not come easy. From hitchhiking to South Bend, Indiana, to attend his first UAW convention, to participating in the famous 44-day Flint Sit-Down strike against General Motors, to being the catalyst for the infamous “Battle of the Overpass” — when members of Ford’s private police organization attacked and beat him and other UAW organizers — he simply would not be defeated.  Beaten, maybe, but never defeated — or even deterred.

Because of his work, the UAW won major victories with the Flint Sit-Down strike against General Motors and other strikes that led to national recognition of the UAW by the Big 3 automakers.

It was a turning point for the UAW and workers everywhere.

By 1942, Reuther was elected the union’s first vice president and in 1946, the fourth UAW president. Under his leadership, historic benefits for workers through collective bargaining included enhanced job security, vacations, benefits, pensions and supplemental unemployment benefits (SUB).  And it is those rights that today are still protecting our members. Reuther could have never anticipated what we’re facing in today’s world of the COVID-19 virus, but his work is still protecting us.

His vision and labor elevated working people from line workers with no voice to Americans who mattered — and who insisted that they be heard. He transformed auto industry jobs into an occupation that supplied a living wage and optimism for the future.

And the future that Walter envisioned, was one where all were treated equally. In that, he was a tireless fighter for social and human rights and a pivotal figure in the civil rights movement.

One of the UAW’s fondest traditions, in my region in southwest Detroit (1A), is the annual bowling tournament. In today’s world, it is hard to understand just what it meant for blacks and whites to come together for a friendly bowling match. But in 1948, when Reuther began this tradition, he bravely challenged the racism of the day, the American Bowling Congress’ discriminatory policy and the fact that the Detroit Bowling Proprietors’ Association banned African-Americans from city bowling alleys. Reuther simply stood up and said ‘NO.’ A tradition was born and a racial barrier shattered. 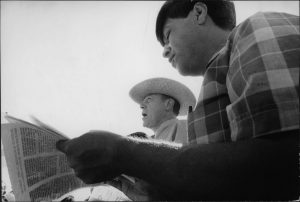 In the 1960s, Reuther expanded his work for human rights by joining with government leaders and Dr. Martin Luther King Jr. on the passage of civil rights legislation. His reach was extraordinary, helping to develop the War on Poverty initiative; marches with social justice and civil rights activists across the country; overseeing the UAW’s financing of the 1963 freedom marches; and speaking before millions at the 1963 Washington, D.C., “March on Washington for Jobs and Freedom.”

He was also an early ally of Cesar Chavez and migrant farm workers in their struggle to humanize agricultural work. He never wavered in his commitment to human and civil rights, despite opposition that included (in the words of this daughter, Elisabeth Reuther Dickmeyer), “numerous beatings and being shot through our kitchen window and almost killed.”

Reuther’s compassion extended not only to the people on this earth, but to the earth itself. He played a critical role in funding and organizing the first Earth Day, which was held on April 22, 1970, just days before his tragic and untimely death.

Today, there is still much to do, but Walter Reuther’s legacy lives on. In his name, we will continue to fight for the rights of all workers to have a voice at the table with management, for the safeguards and rights of working families, and for social and economic justice.

We at the UAW are proud to carry on his work. The world was forever changed by Walter Reuther, and we salute his memory with heartfelt gratitude. Our days in this pandemic of 2020 are difficult, but so were Reuther’s days, as he battled racism, the companies and an economy that saw workers as nothing but cogs in a wheel.

If we have learned anything from his legacy, it is this: We will prevail because we have right on our side.  I am proud, along with the International Executive Board and our entire membership, to honor Walter and May, tireless fighters for working Americans.