A Tireless Fighter for Labor: May Reuther

When you think of the modern labor union movement, Walter Reuther first comes to mind. But dedicatedly working alongside him in the trenches was his wife of 34 years, May (Wolf) Reuther. Throughout it all, May served as Walter’s sounding board and personal adviser. Early in their lives, while Walter was focused on labor and auto workers, May was canvassing on behalf of educators via the American Federation of Teachers.

A teacher herself when she met Walter in Detroit in 1936, the couple married soon after. Right before the wedding in March of 1936, Walter was fired from his job for supporting the UAW as a member. As Walter dedicated himself to organizing autoworkers full time, May became an integral part of establishing a strong UAW. Her salary as a teacher-supported rent and other expenses for the Union offices, and she was credited with “holding Local 174 together.” 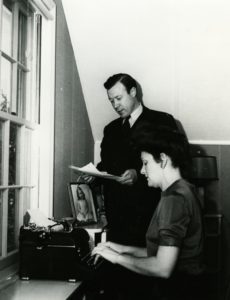 Her long hours fighting for a cause she believed paid off and eventually changed the course of her career focus. Just days after Walter was beaten at the Battle of the Overpass, May made the decision to leave her teaching job and focus on the labor movement.

May also was very active in the community, serving on parent teacher associations, scholarship committees, mental health societies and cultural commissions. She was a fighter for civil rights, marching alongside Walter in the Selma, Alabama freedom march and was heavily involved in conservation and the environment.

May’s contributions were celebrated in 1973 at a rededication ceremony of the nature center at Baldwin Elementary School in Oakland Township,where May and Walter’s two daughters once attended school.

May and Walter Reuther died in a plane crash on May 9, 1970 while on their way to the education center constructed by the UAW near Black Lake in northern Michigan (It was May’s idea to make the Black Lake facility a family education center). 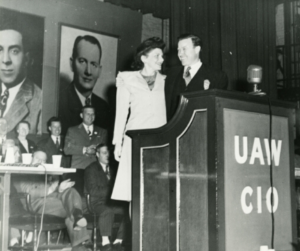 On a personal note:

We salute May’s tireless contribution to the UAW, the labor movement and the community.