The March-April edition of Solidarity magazine is online! 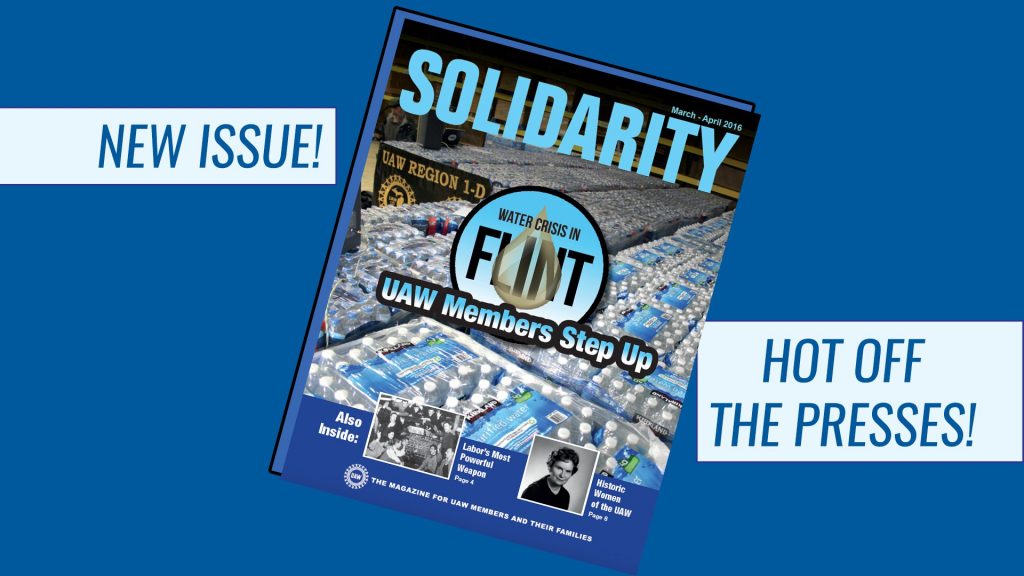 The March-April edition of Solidarity magazine is online! Check out the articles in the archive or download a PDF of the magazine.

In this issue, we report on the quick and thorough response by our members to the water crisis in Flint, Michigan. Our members were on hand in Flint before this became an international story and have helped tens of thousands of Flint residents obtain clean, safe water. Thus far, UAW members have delivered more than a half million dollars of water to Flint residents and the effort continues.

In our PRO-Member section, we look at the use of strikes as a weapon to win economic justice. Our union gained more than 100,000 members following the 1936-37 Flint Sit-Down Strike at General Motors. Recently, a strike at Kohler Company in Wisconsin led to a new contract after a month on the picket line.

UAW member Thomas Kelly continues to do what he loves in his retirement – singing in an a cappella gospel group. The 102-year-old Chrysler retiree says his UAW-negotiated pension allows him the freedom to pursue his lifelong love of singing for the Lord.

Rachel Harbin loves learning and loves her job as a metal model maker at the General Motors Warren Technical Center in Michigan. She was selected as the Apprentice of the Year by the Michigan Apprentice Steering Committee.

March is Women’s History Month. We take a look at some influential UAW women leaders and how being union helps women close the gap in pay equity.

Bowling has a proud tradition within the UAW. That’s because the UAW in the late 1940s pushed an effort to desegregate the bowling alleys in Michigan and across the United States. It wasn’t easy, but our union, led by Walter P. Reuther, was successful in getting the American Bowling Congress to change its discriminatory policy.

And much more. Take a look at the March-April Solidarity magazine.