40,000 workers at AT&T just announced that they will walk off the job for three days starting Friday at 3pm ET/Noon PT if they haven’t won a fair union contract by then. Workers have been at the bargaining table for months fighting for good jobs against a company dead set on lining its pockets at the expense of the workers who make them billions. This weekend the CWA and the UAW are sending AT&T a message that we are united and ready to fight.

This will be the biggest strike in the United States since Verizon workers walked out last year, and may be the biggest strike of retail workers at a national company in U.S. history. The strike would include 21,000 retail and call center workers at AT&T Wireless across the country, and 19,000 AT&T West landline and DIRECTV workers in California and Nevada, along with landline workers in Connecticut.

What Can you Do? 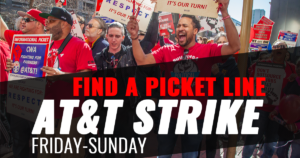 At a nearby retail store, either this Friday, Saturday or Sunday. Click here to find a location near you and RSVP. The CWA will be back in touch to let you know if they aren’t on strike Friday.

Don’t forget to upload any pictures you take on the picket line to the CWA Facebook page in the comments section. 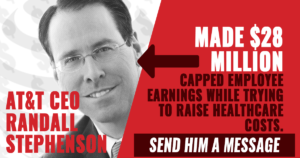 Click here now to send an email to CEO Randall Stephenson to say you stand with workers fighting for good jobs.