Student Employees at The New School (SENS-UAW) Go on Strike 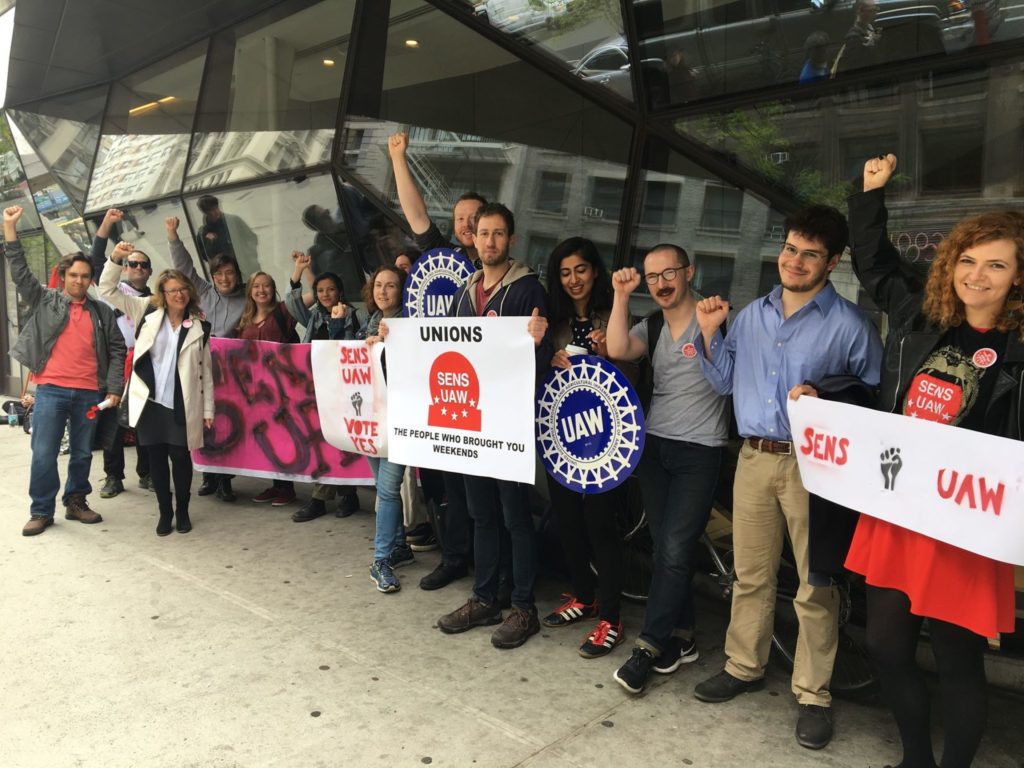 Academic workers head to the picket line after nine months of bargaining and a 99.4% strike authorization vote

New York City – Student workers represented by SENS-UAW (Student Employees at The New School–United Auto Workers) went on strike this morning after a 99.4% strike authorization vote by their membership. SENS-UAW has been at the bargaining table with The New School since August of 2017 in an effort to secure a first contract, and negotiations are expected to continue throughout the strike.

Strike hours will be from 10 am to 6 pm, with concentrated picketing from 11 am to 3 pm, in front of The New School’s University Center located at 63 5th Avenue. The strike will last through the end of this week, unless an agreement is reached. Press is welcome to attend.

“As student workers, we are in a unique position: very few of us receive significant tuition assistance, only a handful receive academic stipends, and none of us receive healthcare benefits,” said Robert Cremins, a SENS-UAW member. “We have been bargaining with the university for more than nine months – and it took them more than four months to provide us with a half-page economic proposal. Every month that they delay is a loss for our members, and we have had enough.”

SENS-UAW is fighting to secure healthcare benefits, tuition and fee waivers, fair wages, timely payment, and greater accountability and transparency in the workplace.

“Our working conditions are the learning conditions for our students,” said Helios Bajwa, a SENS-UAW member. “A fair contract will help make our lives more stable, allow us to focus on our work and improve teaching and research conditions across campus. Administrators have failed to put forward a comprehensive economic package that includes meaningful health care for academic student workers, so we are going on strike.”

SENS-UAW is at the forefront of the unionization movement happening across private universities across the country. Student workers at The New School are on track to be the second student worker union at a private university to secure a contract (after NYU), and the first under the new NLRB framework established by the Columbia ruling in 2016. A contract at The New School will set a precedent for student worker union contracts going forward. At a time when teaching at all levels is being devalued and made more precarious, SENS-UAW fights alongside the broader labor movement to demand that the value of academic labor be recognized.

Tuesday’s strike is taking place against the background of a broader assault on union labor and working conditions at The New School. Student advisors have experienced cuts to their benefits, and recently, after 45 unionized cafeteria workers were let go, SENS-UAW and others occupied the cafeteria until the cafeteria workers’ contract was extended and their jobs were reinstated for a year.

Background
SENS-UAW was formed in the fall of 2014 by academic student workers to address precarious funding, inadequate medical coverage, job and wage insecurity, and a lack of transparency in administrative policies. That same fall, SENS-UAW filed their first petition at the National Labor Relations Board, along with student workers from Columbia University, whose petition later formed the basis for the historic NLRB decision ruling that student workers at private universities have collective bargaining rights. In April, 2017 the NLRB ruled on the SENS-UAW decision and set an election date in May. Despite interference from the administration, SENS-UAW won their election with 99.6% of the vote and was certified in August of 2017. The union represents more than 800 academic workers at The New School.