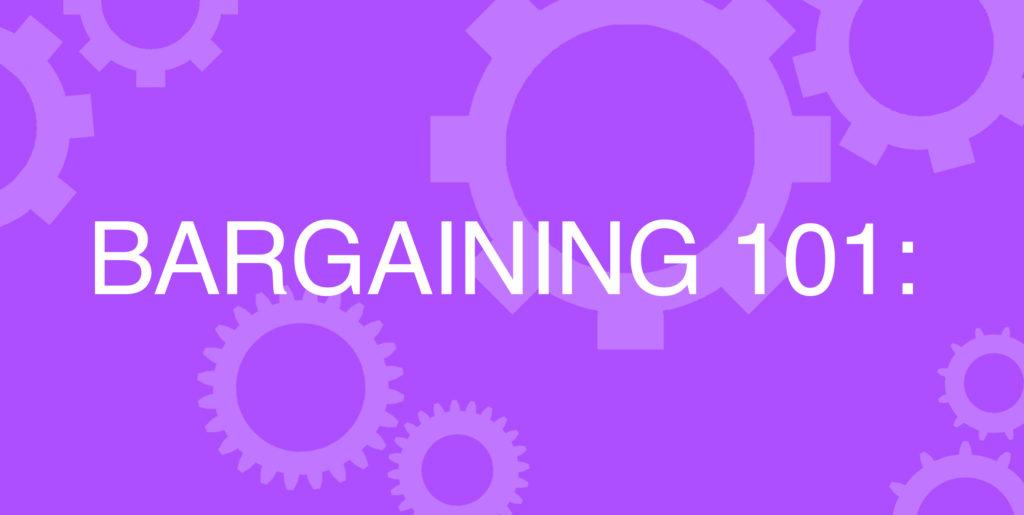 It’s a standard practice when a union is bargaining to ask members for a strike vote. It’s both a show of confidence in the bargaining team and the first salvo toward management that union members are united as they head into negotiations. The ramping up doesn’t stop there. The real pressure on management comes when the bargaining
team sets a strike deadline.

A strike is simply the act of workers withholding their labor, which, at the end of the day, is the only thing management wants from its workers. It’s a legally protected activity, but it is not without cost – both striking members and employers suffer economic harm once strikes are initiated.

Because the costs of a strike are calculable, the threat is just as powerful as the strike itself. Management is well aware of the rights union workers have at their disposal and what the costs would entail.

That is why when negotiations are drawing to a point where there is little movement, unions sometimes issue strike deadlines. The notice tells the employer that by a specified date, workers will take direct action. It’s a strong motivator to move management to settle the agreement.  And it works.

Glenn Vinson is president of UAW Local 1805 (Region 5).  He and his members work for Folgers Coffee Company in New Orleans, Louisiana. Vinson is a working president – which means he is on the line each day.  And he’s been making coffee for 30 years.

This past year, his members went back to the table to negotiate their contract. Their last negotiations three years earlier had been rough, but the bargaining committee tried something new this time: setting a strike deadline.

“During negotiations, management thought they had all the cards. They took their time.  We were working short weeks. They were in no hurry to address our issues,”
remembers Vinson. His members had given the bargaining committee a strike vote, but they had not set a
deadline. That is, until the last week.

“A few days before our contract ended, we set a deadline of midnight Sunday to walk if we didn’t have an agreement. When we let management know, it changed everything,” says Vinson. “You could see it in their faces and hear it in their voices. Suddenly, they were on the phone a lot,  responding quickly to us. Numbers started moving. It was like night and day.” “I know some wonder what we’re thinking when we finally have the upper hand in bargaining. The simple truth is that we’re always thinking about the members.” Vinson continues, “Sure, we had the option of going forward with the strike at that point, but we’re always weighing that each week out on a strike costs our members 2 percent of their
wages. We weigh that out against what we gained, but ultimately, it’s the membership that decides.”

In the end, Local 1805 members agreed that the contract was fair and ratified it by majority vote.

Workers turn out for 2017 Labor Day with a big message