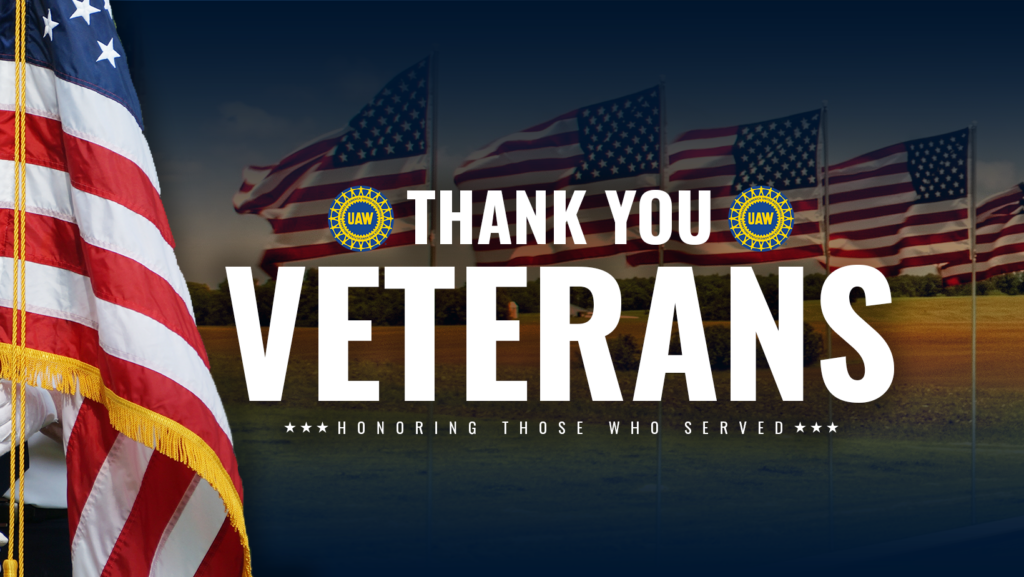 Today is Veterans Day – a day of remembrance, reflection, and honor for those who have given much to serve our nation.

As you celebrate this day with your family and communities, I encourage you to watch two videos which describe the special connection between UAW members and our nation’s veterans.  The first video tells the story of the passage of the “Sergeant First Class Heath Robinson Honoring Our Promise to Address Comprehensive Toxics (PACT) Act.”  Sgt Robinson’s mother-in-law is UAW retiree Susan Zeier who tirelessly lobbied to pass the bill which helps veterans who were exposed to toxic burn pits.  That bill was signed into law by President Biden in August. You can watch a video of the PACT Act here.

The second video tells the story of Sgt Gary McKiddy who served in the Vietnam War.  McKiddy was a member of UAW Local 696 in Dayton, Ohio, when he enlisted in the Army in 1970.  As door gunner, he was awarded thirty-nine medals and flew six hundred and seventy-five combat missions. He was killed in action at the age of twenty while saving the life of a fellow soldier he dragged out of their crashed helicopter.  Since that act of valor, his friends and family have been sharing his story and advocating for him to be posthumously awarded the Medal of Honor.  This year McKiddy’s supporters – including his brother and retired UAW staff Rick McKiddy — got a stretch of highway in Miamisburg, Ohio, named the “Sgt. Gary Lee McKiddy Memorial Highway.”  You can watch that video here.

Thank you, UAW Veterans, for your service and solidarity.  And thank you UAW family for your enduring support of our great union.

Get the facts on the Lockout of Honeywell workers