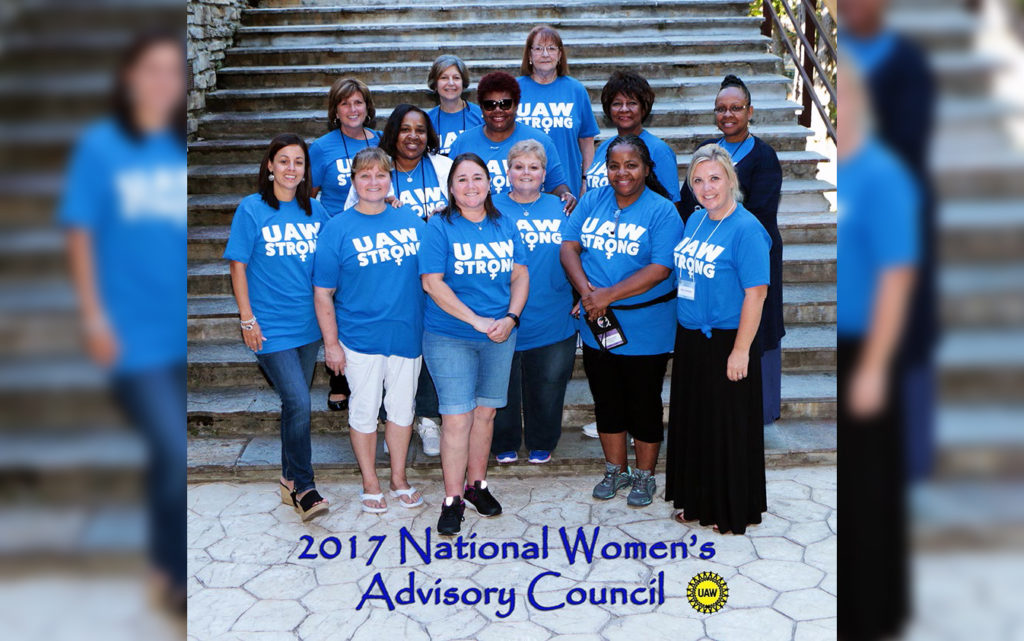 The UAW National Women’s Advisory Council creates education programs and training sessions for women on topics such as leadership, diversity, racism, sexism and many others.

Hurdles to Equality Remain High, but UAW Women up to the Challenge

As we celebrate Women’s History Month with this year’s theme “Nevertheless, She Persisted: Honoring Women Who Fight All Forms of Discrimination Against Women,” the UAW can look back on a history of strong trailblazers who persisted against the odds stacked against women: May Reuther, Walter Reuther’s wife and union organizer in her own right; the first director of the UAW Women’s Bureau in the 1940s, Millie Jeffrey; members of the Flint Women’s Auxiliary during the 1936-37 Flint Sit-Down Strike; local president and second director of the Women’s Department Caroline Davis; Walter Reuther Distinguished Service Award, Feminist Achievement Award and 25 Outstanding Black Women in Michigan Award recipient, and Women’s Department Assistant Director Dottie Jones; and many, many others who stood strong. For decades the UAW has worked with locals to fight discrimination against women.

Today, workplaces are better for many women. But the hurdles to equality remain high. The U.S. still is the only developed country that doesn’t require paid sick days and paid maternity leave. Wages have been stagnant since 1979, widening the wealth gap that affects more women than men. Men still, on average, make more than women for the same work. According to the AFL-CIO, many women say they’ve been sexually harassed at work but more than half are afraid to report it despite workplace policies against harassment.

Union membership is one of the best tools women have to knock down these barriers thanks to collective bargaining rights that give women a voice in the workplace. Union women have better pay and health care, paid sick days, better maternity and family leave benefits, stronger sexual harassment and discrimination protections, and other advantages over nonunion women.

Without Hope They Divide Us

UAW Vice President Cindy Estrada directs the union’s Women’s Department. While some of today’s politicians feel more comfortable than ever publicly denigrating women and rolling back their rights, “Every day I remind myself of the hope we have in this country. Without hope they can divide us and shame us. With hope we can achieve our goals. We have women with the courage now to stand up in the #MeToo movement and the men who have stood in support of them—that is hope.

“Women need men to support us in the plant. I am proud of the women and men who are supporting them, running for office in our union, because that’s what makes change. I wouldn’t be where I am today without incredible men, and women, that have supported the work that I do and encouraged me.”

In the last year a record number of women have entered legislative and congressional races, including UAW Region 9A Director Julie Kushner, who is a candidate for the state senate in Connecticut. More UAW women need to run for public office so women’s issues will be taken more seriously in the halls of power. “Women have to have a real voice at the table, a voice that comes directly from women. More of us have to be in leadership positions to make that happen,” said Kushner.

Region 5 Women’s Advisory Council member Kim Cook-Bell of Local 2250 is a quality control operator at the General Motors Wentzville Assembly Plant in Missouri. Women are still not taken as seriously or brought into leadership as often as men, says Cook-Bell. She recalls working in nonunion jobs where her ideas were ignored then later implemented by a man, being told to make coffee when trying to contribute at a meeting, being called bossy when showing initiative and facing intimidation after refusing a man’s advances.

As a woman and an American of Asian descent, she saw how having a union job helps protect her from racial, sexual and age discrimination and harassment, and provides equal pay. She joined her union sisters in the Women’s March on Washington and the #MeToo movement. “Vice President Estrada has been an inspiration from day one. I can’t tell my young granddaughter I did nothing to protect her or make her life better,” said Cook-Bell. For Women’s History Month her local is honoring women members by displaying their stories at local meetings and creating a scrapbook for future generations.

Margie Chambers, Region 2B’s Women’s Advisory Council member, belongs to Local 1005 at GM Metal Center in Parma, Ohio. She’s an African-American woman in a tool-and-die profession dominated by men and has been elected vice president of her local twice. “Women in leadership know women’s needs,” said Chambers. “There was a time when the women’s restroom had a personal item machine that you had to pay to use. I went to a meeting, spoke up and said these should be free. Some of the men laughed at me but today it’s a free product in our restrooms. If we hadn’t spoken up, we wouldn’t have it.” Today Chambers is working hard to recruit more women into skilled trades and find male mentors for them, something she wishes she had when she started out.

Hinson: Contract a Vehicle to Raise Our Concerns

Region 8 Women’s Advisory Council member Stacey Hinson of Local 5285 is a 36-year quality assurance inspector at Daimler Truck in Mount Holly, North Carolina. “Having a union contract provides a way to bring up women’s concerns about discrimination or harassment with a committee or your plant representative,” said Hinson. “With negotiated equal pay I could afford to send my son to college as a single mother.”

For decades unions have helped lead the way for national advocacy of women’s issues. Today, the UAW has anti-sexual assault and anti-discrimination training programs for members with Ford and GM, among other departments. While the current political climate seems to be eroding some of the gains women have made, Vice President Estrada is hopeful. “I think a lot about how I raise my sons to enter this world as adults, to be different, to stand up for women. I talk to them about power in this country and the more women we have in power the less sexism and sexual harassment we’re going to have. Women need to know that there’s a woman in a leadership position because unions and all workplaces will be stronger with diversity,” said Estrada.

UAW Statement on Signing of the USMCA