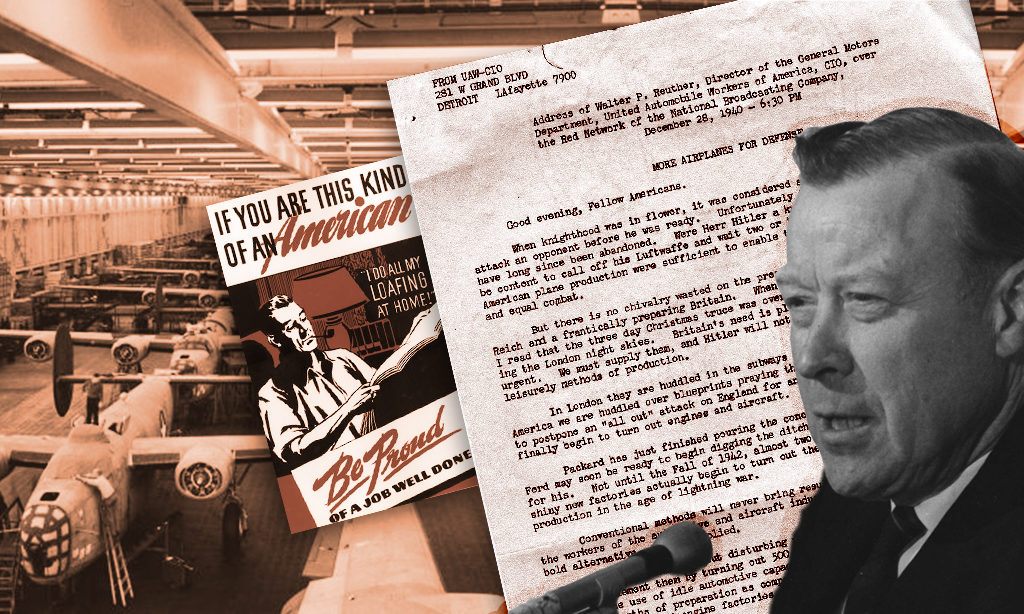 May marks the 82nd anniversary of Victory in Europe (VE) Day. Three months later, the Japanese would surrender, Victory in Japan (VJ) Day. These two events were major milestones in the history of the United States and could not have been accomplished without the sacrifices of many, including those who never came home.

While the fighting in both the Atlantic and Pacific theaters raged, another battle was being conducted on the home front – keeping our troops and those of our allies supplied with enough arms, food, clothing and other necessities so they could defeat the Axis powers. That battle took the concentrated efforts of many UAW members.

As Great Britain was battling the Nazis in the skies over London, Walter Reuther, then UAW vice president and director of the UAW’s General Motors Department, gave a Dec. 28, 1940 speech titled, “More Airplanes for Defense.” It was given at a time when many Americans wanted our nation to stay out of the conflict in Europe. In it, he called for the immediate conversion of U.S. auto production to airplane production to help the British defeat the Nazis:

“Conventional methods will never bring results in unconventional warfare, and the workers of the automotive and aircraft industries for whom we speak present a bold alternative, quickly applied.

“We believe that without disturbing present aircraft production schedules we can supplement them by turning out 500 planes a day of a single standard fighting model by the use of idle automobile capacity. We believe that this can be done after six months of preparation as compared to 18 months or two years required to get new plane and engine factories into production.

“This is Labor’s plan, as worked out by the automotive workers of Detroit and presented to President Roosevelt by Philip Murray, president of the Congress of Industrial Organizations.

Reuther wanted to prevent the U.S. from getting embroiled in the war by supplying Britain with the planes it needed to fend off the Nazis, which had the advantage of building its war machine for years.

“The difference and our opportunity is that we have in the automotive industry the greatest mass production machine the world has ever seen. Treated as one great production unit, it can in half a year’s time turn out planes in unheard of numbers and swamp the Luftwaffe. This is labor’s answer to Hitler’s aggression, American labor’s reply to the cries of its enslaved brothers under the Nazi yoke in Europe.

“England’s battles, it used to be said, were won on the playing fields of Eton. America’s can be won on the assembly lines of Detroit.”

Roosevelt was impressed by the plan, even if some automobile company executives were rankled by Reuther’s intrusion into their production plans. Of course, America was unable to stay out of the war when the Japanese attacked Pearl Harbor on Dec. 7, 1941 and Hitler declared war on the United States four days later.

While many UAW members volunteered to serve their country, many women took their spots on the assembly lines, proving they could do the job as ably as men. African-Americans, many of whom were regulated to some of the dirtiest and unpleasant jobs in the plant, were able to do other, more desirable jobs and prove they could do it as competently as their white counterparts.

UAW-represented plants all over the country converted to wartime production as an endless supply of airplanes, tanks, jeeps and other vehicles were churned out from the assembly lines. The Arsenal of Democracy supplied by the sweat of UAW members played a significant role in defeating fascism, liberating nations and making our nation a global superpower.