‘The Wall That Heals’ 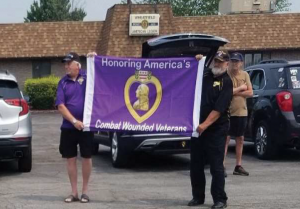 On July 20, 2021 “The Wall That Heals” was escorted to Veterans Park in Tonawanda, New York. An estimated 250 to 300 motorcyclists from very diverse backgrounds participated in the escort. It was an emotional day for many who participated as the escort slowly made its way from Niagara Community College in Sanborn, New York to the park in Tonawanda. The passage was supported by many people from the surrounding communities who lined the streets of the route. There were American flags, POW flags, and signs held by many as the wall passed by. What an incredible sight it was. The escort was also followed by a refueling plane from the Niagara Falls Air Force Base. The plane made continuous circles over the route until the wall was delivered. There was a storm of a lifetime brewing the whole day. But it held off until the escort had finished their work. 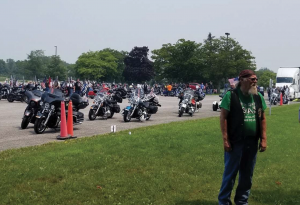 On July 21, 2021, volunteers from the UAW Region 9 Veterans Committee gathered to set up and assemble the memorial. They worked to assemble the wall, and the mobile museum. The grounds were quite soggy from the storms that occurred the evening before. The air was crisp for a mid-July day, but the sun was bright, and the volunteers were ready to do the hard work required to assemble the grounds in preparation for the many visitors that come to see their loved one’s names. This memorial is a three quarters replica of the original Vietnam War Memorial in Washington and it is very impressive. The crew that follows the memorial to each location is very knowledgeable about the memorial, and the soldiers who are listed on it. We learned many facts about the wall and the war. One fact we learned was about a young soldier by the name of Dan Bullock who enlisted in the Marines at age 14, was sent to Vietnam at age 15, and was killed in action one month later. He is the youngest American KIA of the Vietnam War. His name appears on panel 23W Line 96. Great care is taken during assembly. Volunteers are required to wear gloves when touching the panels. Nothing is allowed to be set on the frame after assembly begins. This is because once the fi rst panel is placed, it establishes the memorial. The staff that follows this memorial are very diligent with their duty to show reverence for it. The experience is moving. On July 25, 2021, volunteers gathered once more to disassemble and pack up the memorial to send it off to its next location. This memorial will make 38 stops this year, around the country, before returning to Washington. UAW Region 9 Veterans Committee thanks all who have served or are serving. We thank you for you service and sacrifice.