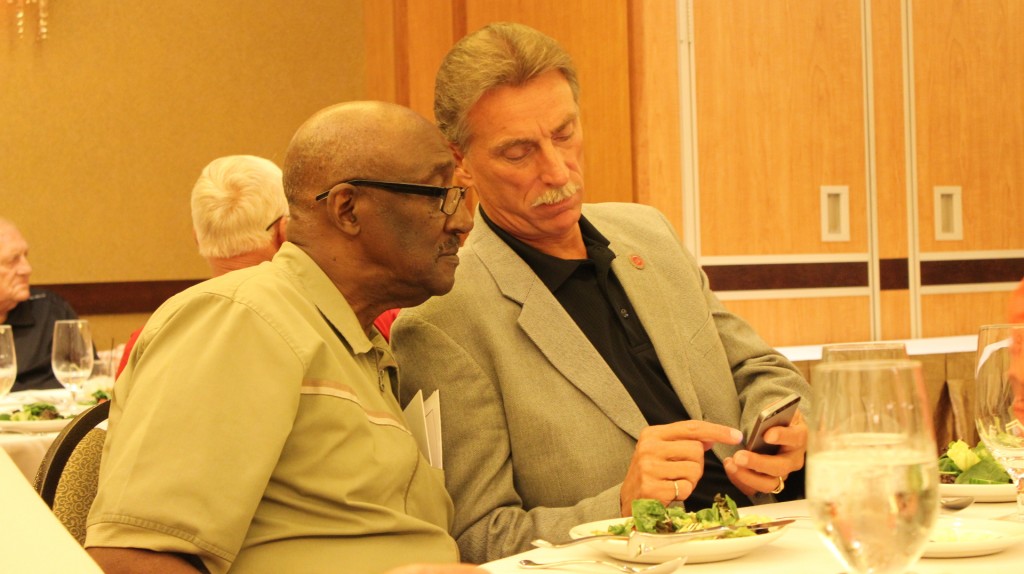 UAW member from Selma recalls how it was before the law

Charlie Sheppard didn’t have to see the movie “Selma” to understand the dangers African-Americans faced.

“To be a black man in Selma was a curse,” said Sheppard, who is now UAW Region 2B’s retiree executive board vice chairman.

Sheppard was born in Selma, Alabama, in 1938 and grew up a block from Broad Street, which leads to the historic Edmund Pettus Bridge. There’s been a great deal of attention this year on Selma where racist policies allowed law enforcement thugs to attack civil rights activists on the bridge 50 years ago. The nationwide outrage from “Bloody Sunday,” as it later was called, helped pass the Voting Rights Act (VRA), which was signed 50 years ago in August.

“People ask me if I saw the movie “Selma” or am I going to Selma,” Sheppard said. “I know it’s a historic place but if they only knew. I was there, I was in the movement. I was part of the movement. Before Martin Luther King marched across the bridge, I was chased, I was beaten, I was shot at, it happened to me and it’s a real thing.”

The VRA outlawed literacy tests and other laws passed by mostly southern states that prevented African-Americans from voting. After its passage, Congress amended the act four times to broaden the law to cover other groups, including minority language speakers and the disabled.

However, a 2013 Supreme Court case called Shelby County v. Holder blocked the VRA’s enforcement section, stating that the formula used to determine which states needed special oversight for changes to their voter laws, was outdated. This ruling allows states to pass new voting restrictions that discriminate against not only minorities, but poor people, young people and the elderly. So while some states pass voter laws with language that on the surface doesn’t appear discriminatory, they create inequities. For instance, a state may accept a handgun permit but not a student ID as proof of identification. Proponents of these laws claim they are necessary to prevent voter fraud, but numerous studies have shown that voter fraud is virtually non-existent.

President Obama urged Congress to pass new and broader legislation and urged people to exercise their voting rights and get out and vote.

Back in the day, most African-American adults just didn’t consider voting because it could get you killed.

“We were worried Rosa Parks was going to be killed just for sitting at the front of the bus, so to think about how they are going to let us go vote wasn’t even in our minds,” he said.

Indeed, Sheppard was beaten with chains, chased and shot at by a store owner for trying to buy pants for his high school graduation. He was threatened with death for sitting on his own front porch with a white girl.

“There was a girl who lived across the street and down a ways, she would come over sometimes when we were kids. She didn’t think anything of it and neither did I until one of the policemen came up the walk and told me I better get off that porch or he’d kill me.”

He was kidnapped by two white men and forced to unload furniture for hours. They told him if he dropped anything they would hang him.

“I didn’t know if I was going to live through the day,” Charlie said. “They dropped me off and threw a dollar and a quarter at me.”

He credits his mother for giving him advice that stayed with him for his whole life by telling him not to judge all people by the actions of an ignorant few.

“But you know it was hard,” he said. “I had a lot of hate in my heart. I started to hate white people.”

Sheppard left town the day he graduated from high school in 1956 and headed for Indianapolis. He joined the Marine Corps a few months later and even though he was the only black man in his entire platoon, he went on to become its squad leader.

“I think with joining the Marines, God was setting me up to be the best good person,” adding that in the Marines that there were no blacks and no whites, just Marines.

When Sheppard got out of the Marines, he got married and settled in Indianapolis. He got a job at Chrysler in 1964, joined the UAW, and became the first African-American steward of Local 1226. He remembers one time when he had to represent a co-worker who had called him racial slurs. He wanted to get revenge but he remembered what he learned in the Marine Corps and what his mother said to him about judging people. He also remembered he was elected shop steward to represent all of his UAW brothers and sisters so he did what was right and did the best he could do. He won the case and prevented his co-worker from being fired. After the case, the coworker thanked him and apologized for the abuse he threw at him all those years. Charlie said it taught him to be a better person, to do the best he could do

“I couldn’t go back to Selma and feel good about anything,” he said. “There were too many bad memories.”

But he remembers the first time he voted, in Indianapolis right after the VRA became law. He felt like he had finally arrived.

“It was like getting a union card, it was like I died and had gone to heaven,” he said. “I was excited that finally – finally — after all those people had died trying to get to vote, that finally I could vote.

“I tell everyone to go vote because it makes a difference. Exercise your right for what someone died for.”