Union front: Our, Work, Our Lives, Our Health 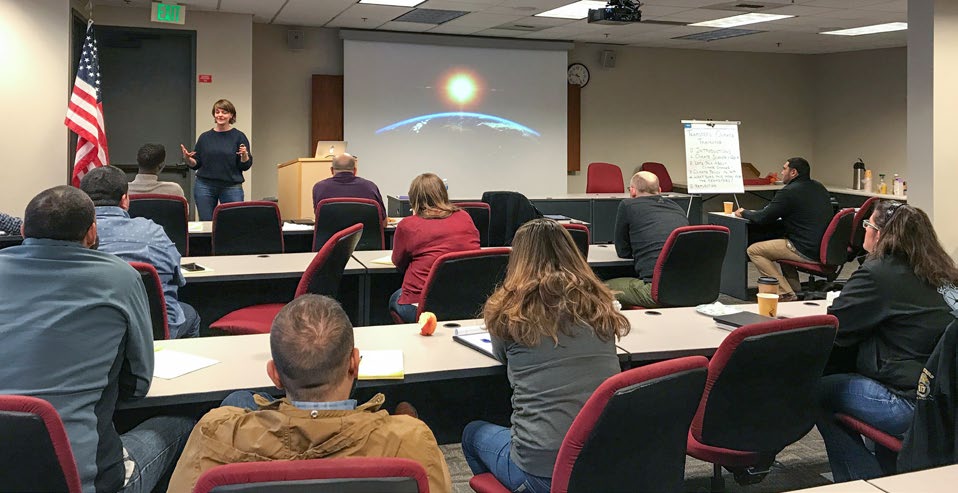 In the Pacific Northwest, a place of abundant natural beauty with a rich labor history, UAW Local 4121 is working hard to unite workers around health, safety and conservation.

Local 4121, the Union of Academic Student Employees at the University of Washington, more than 4,500 members strong, is made up of research assistants, teaching assistants, tutors, and graduate fellows. They work in labs, teach classes, grade papers and are critical to the university’s core mission as a center for instruction and research. A significant part of that research focuses on climate science, fisheries management, public health, and clean energy. And as these academic workers delved deeper into the intricacies of shifting climates on local industries like shipping, fishing, farming and forestry, they knew it wasn’t enough just to publish their findings in the journals of the Ivory Tower. To make an impact, they needed to take these findings to the bulwark of the U.S. economy: other workers.

In August 2016, Local 4121 formed a climate justice work group to connect labor unions from all sectors of the economy with the issues of climate science and workers’ rights. Just as Local 4121 members had been supported by other members of the UAW and other unions since their local’s beginning in 2000, they wanted to support members of other unions who were turning to them for help navigating the uncertain waters of climate change.

“The issue of climate change is not just one of scientific discovery. It has real implications for our lives and livelihoods,” says Michelle Tigchelaar, a Local 4121 member and labor activist. “Workers play a crucial role — in our central role in the transformation of our economy, and in the power that unions hold for bringing about societal change.”

This intersection is best illustrated by the local’s outreach work through its speakers’ bureau. Individual graduate scientists working on issues as diverse as battery storage solutions for new energy research or the impacts of climate change on food security are invited to the meetings of other unions to present their research. At these meetings, they discuss how climate issues will impact all workers, their families, and their outdoor recreation, and strategize how to work together to minimize the impacts of climate change on policy.

“My most memorable conversation was at a workshop with representatives and organizers of the Teamsters union,” Tigchelaar says. They pointed out how driving in cabins without AC may be uncomfortable now; it’ll be worse when summer temperatures regularly hit what are now just extremes. Another described how prison guards usually have to stand outside for several hours, something that would be dangerous in increasingly warm summers.

While discussing policy solutions, an organizer speculated that something like a carbon tax might lead companies to overload the trucks, endangering the drivers. “Talking together about these issues allowed all of us to learn and come to a better understanding of the challenges ahead,” Tigchelaar says.

It all started in the spring of 2016, when Local 4121’s members invited Nicole Grant, the executive secretary-treasurer of the King County Labor Council, to come to a Local 4121 membership meeting. She encouraged UAW members studying climate change to form a climate caucus in the Martin Luther King County Labor Council. Local 4121 members Judy Twedt, a researcher studying climate change, and Miriam Calkins, who studies occupational and environmental health, joined as founding members of the climate caucus.

“I realized that what we could bring to the table was our research, our knowledge of the basic science and the risks of climate change,” Twedt says.

Twedt proposed developing a short, 15-minute presentation for the climate caucus on climate change and how it will impact residents of Washington state. After that initial presentation with the climate caucus, other unions requested similar talks for their membership and staff meetings. It has since steamrolled into a speakers bureau, picking up members from the university’s drama school, its clean energy institute and more.

Labor organizations that have hosted Local 4121 members so far include the International Association of Machinists, Postal Workers of America, International Union of Painters and Allied Trades, Teamsters, International Brotherhood of Electrical Workers, the American Federation of Teachers, and the Martin Luther King County Labor Council.

In summer 2017, Local 4121 was asked to join the steering committee of the Alliance for Jobs and Clean Energy, a coalition of labor, social justice, environmental, and faith groups that are working to support expansion of clean energy in Washington State through a citizens’ initiative.

The goal of the climate justice workgroup is to talk about climate in a worker-centric environment, to move beyond polarization and stereotyping to have honest dialogue. “For too long there has been a false divide between climate change and job creation,” says Alex Lenferna, a Local 4121 member and researcher from South Africa who studies climate justice. “Acting on climate change has the potential to be one of the greatest opportunities to create good jobs while building a new, clean energy economy.”

Judy Twedt is a Local 4121 trustee and founder of the climate justice working group. She’s from Tacoma, Washington and studies climate science and climate communication.

Michelle Tigchelaar is a postdoctoral scholar helping to form a union for postdocs at UW who studies the impacts of climate change on crop production and food security.

Kate Griffith is a Local 4121 member, graduate of University of Washington, and volunteer writer for the Climate Justice Workgrou

5 Ways to Get out the Vote