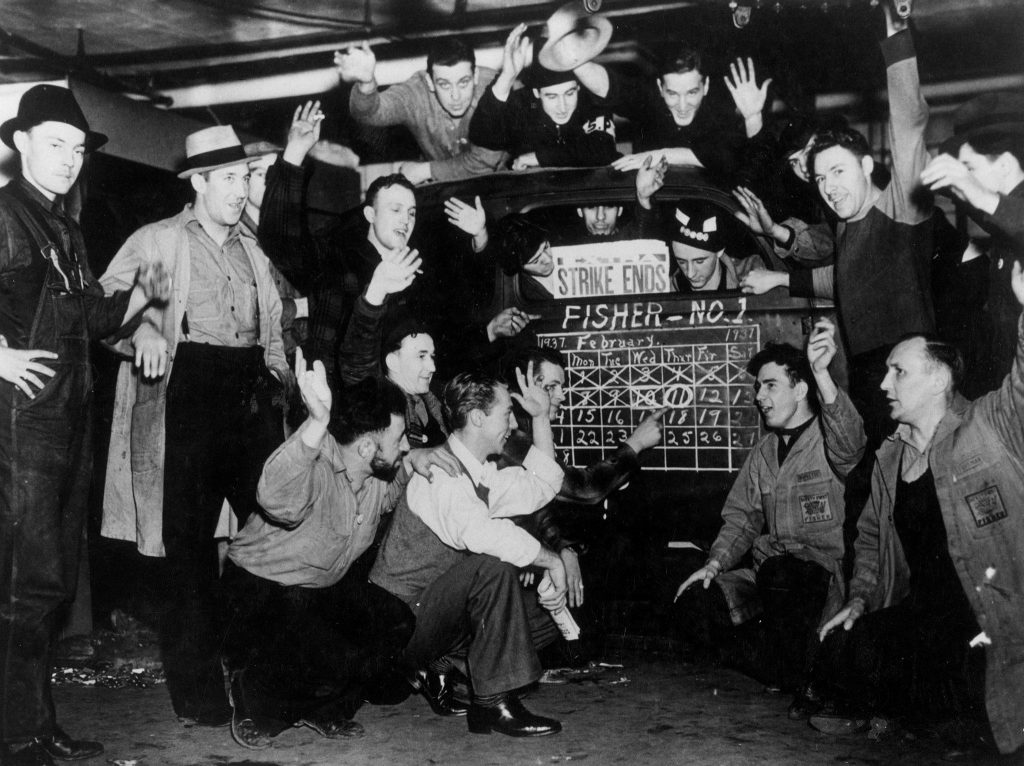 Celebrate the Victories of the Past, the Promise of the Future

The hours are brutally long; overtime pay doesn’t exist. Workplace safety is unheard of. Limbs are lost, and yet the machines grind on, indifferent to your suffering. Do you want to keep your job and feed your family? Your boss wants his roof repaired and a gift of his favorite liquor, too. Consider it an assurance of your continued employment. Need to heed the call of nature? Not on the clock! If you find the restroom irresistible, there is an army of unemployed waiting outside to take your place. What about the union? Ever considered getting thrown down a flight of stairs? Even breathing that word could tip off a network of spies, eager to assault, harass or fire you. Don’t even think about collecting unemployment. Either you work, or you starve, simple as that. Your life and limb are at the boss’s whim.

While it may sound like a Third World dystopia, I’m describing working conditions once found on our own soil. This was the grim reality for Flint, Michigan, autoworkers in the 1930s. The raw exploitation prompted the Flint Sit-Down strike and helped give birth to the UAW. Those brave workers created a legacy that we all continue to share and benefit from. A legacy that we are called upon to follow if we’re ever to see the historic gains made by our union again. A legacy we celebrate every year on Feb. 11, the day marking the end of the 1936-1937 Flint Sit Down Strike. A celebration we call White Shirt Day.

I learned about the importance of this tradition from two of the most influential people in my life: my grandmother, Louise Crawford, and my great aunt, Geraldine Blankinship. Both were members of the Women’s Emergency Brigade during the formative years of the UAW. They both had many interests, but none could match the passion they had for the union. Self-educated, working-class women whose main concern was always justice for the little guy. Their father, Jay Green, who was vice chairman of the Flint Sit-Down Strike, had a huge influence on them, as they did on me.

Living in Flint for most of my life, this family history helped contextualize the reality of the economic situation. How did Flint go from being one of the wealthiest per-capita cities in the United States to one of its poorest and most violent in a generation? Why did some work tirelessly and have nothing to show for it while some others, who happened to be born wealthy, had everything handed to them? If the union had once made the working class so strong, what could be done to make it that way again?

Like many of society’s big problems, there aren’t always straightforward solutions. However, in this case I’d like to offer a huge first step: class consciousness. It is the recognition that there are broad and significant class distinctions in society: those of us who must work for a living, the working class, and those of us who, by birth or luck live off of the hard work of others. They are the 1 percent, the rich. Early unionists understood this concept well.

Today corporations have amassed an army of highly paid lawyers and lobbyists that advocate on their behalf. They use every conceivable mechanism to rig the economy in their favor. The rich are class conscious and act accordingly. We, on the other hand, are not. This lack of unity tips the scales against us, despite our overwhelming numbers.

Class consciousness is a powerful concept that cuts through the divide-conquer-strategy that is often used to weaken us. Imagine the quality of life we could have if we stopped mistreating one another based on race, gender and what side of some imaginary geographic line we live on. Among the most poignant memories I have of my Aunt Gerry is the one instance I remember her getting angry enough to swear after seeing some racist rally on the news. Racism is the starkest example of everything we’re supposed to be against as union people, and she wasn’t shy about letting me know it. What if we decided to truly work together for the betterment of everyone? Can you imagine what that would look like? To me, that solidarity looks like a sea of white shirts.

White Shirt Day was always one of my favorite holidays. A day when good, union people would come together to celebrate the victories of the past, the promise of the future and the dignity of the working person. It’s a day where we assert our humanity and say together that, while you may be the 1 percent, we are all fundamentally equal. A message that while you may be suffering now, through unity there is hope. Corporations and their money are global and we can’t hope to compete with them unless unions are global, too. If we continue to mistreat one another, the 1 percent has us right where they want us, divided and weak.

There is a deeper calling embedded in White Shirt Day. One that requires our best, most conscious selves. A calling to expand solidarity beyond our workplaces, auto plants and union halls and to spread it across the globe. To see all working people as brothers and sisters and raise them up with dignity. To see yourself in the workers struggling in Latin America and Asia. Knowing that if your company was able to, they’d exploit you in the same way. Corporate greed and lack of a unionized workforce are the problem, not the workers themselves. Remembering the incredible things that were accomplished when the entire U.S. auto industry was organized, imagine what the world would look like if every sector was united! Through international worker solidarity we have the potential to create a more dignified and prosperous life for everyone. Brotherhood is our historical calling; that is the true spirit of White Shirt Day.

Sean Crawford is a member of UAW Local 22 and works at General Motors’ Detroit/Hamtramck Assembly Plant.