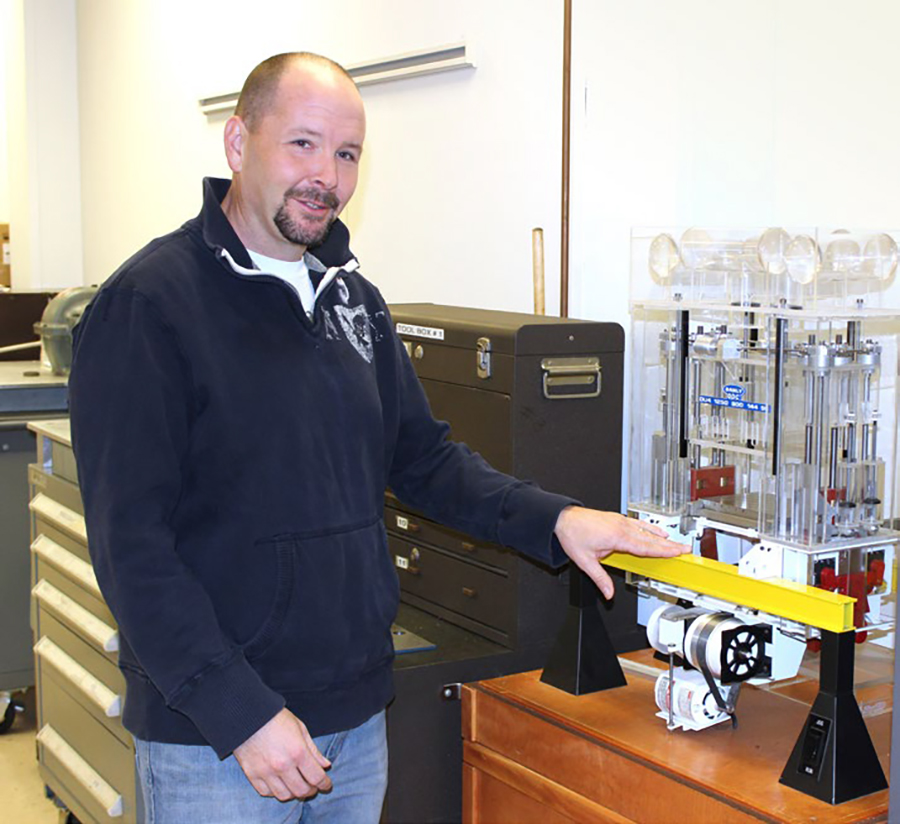 Apprentice tool-and-die maker Patrick Mumbower has started the 8,000 hours of training needed to become a UAW journeyman at Ford.

Patrick Mumbower wants his children to understand that they are never too old to chart another course in life. It’s one reason why the 40-year-old former paint shop technician at Ford Motor Co.’s Dearborn Truck Plant in Michigan is aiming to become a journeyman tool-and-die maker.

“For me, I’ve got kids and I want to show them that it’s never too late to change what you are going to do,” said Mumbower, a 17-year member of UAW Local 600.

He’s getting the opportunity thanks in part to a $5 million, five-year federal grant that the UAW Skilled Trades Department secured in partnership with the UAW-Labor Employment Training Corporation (UAW-LETC), a private, non-profit national labor-management organization that has been operating federal, state and local workforce programs since 1984. More than 1,000 apprentices in a variety of UAW-represented facilities will receive apprentice and pre-apprentice training under the grant.

“We’re working hard to provide apprenticeship training for our members who want the opportunity to become UAW journeymen,” said UAW Secretary- Treasurer Gary Casteel, who directs the union’s Skilled Trades Department. “This funding will go a long way toward getting our members’ skills up so that they may learn a trade and carry a UAW journeyman’s card.”

The program is already underway at UAW-represented Ford facilities, and is expected to be expanded to UAW-represented General Motors and FCA US plants. Other plants that have either modified or started new apprenticeship programs include John Deere Engine Works in Warterloo, Iowa; Oakley Industries in Northwood, Ohio; Carlex Glass in Nashville, Tennessee; IAC Strassburg in Strassburg, Virginia; and these facilities in Michigan: CWC Textron (Muskegon); Nexteer (Saginaw); Flex-N-Gate (Warren and Royal Oak); Huron, Inc. (Lexington); Bosch Corporation (Kentwood); and Federal Mogul (Greenville).

The current trades in the program are electrician, welder, tool-and-die maker, plumber/ pipefitter, millwright, metal model maker and machine repair. Additional trades will be added as the program expands. One of the goals of the grant is to provide apprenticeship opportunities to under-represented groups, including women, veterans, persons of color, and other underserved populations.

Because of the success of the program, UAW-LETC and the International have received national attention and have been invited to make a presentation to the National Governor’s Association’s Learning Network at a future workshop.

For Ford apprentices, the program starts with taking courses in the Industrial Readiness Certificate Program (IRCP), which was won in collective bargaining in the 2015 contract with the automaker. Prospective apprentices must successfully complete three non-accredited courses in math, blueprint reading, and trade readiness before being accepted into the apprenticeship program. Mumbower said he believes that the IRCP helps determine whether a prospective apprentice is ready to devote the time and effort it takes to study and train to become a journeyman, which takes a total of 8,000 hours of training, including 750 classroom hours.

“They want to invest in somebody who is committed to the program,” Mumblower said at the UAW-Ford Technical Training Center (TTC) in Lincoln Park, Michigan.

That investment should begin inside UAW-represented facilities. Before the automaker looks outside to fill an ever-increasing need for skilled trades workers, it should develop them from the ranks of its UAW-represented workforce, he said.

“It’s a lot like outsourcing jobs,” Mumblower said. “Buy from within and promote from within — that’s the way it should be.”

James Moore, 43, another Local 600 member, has 23 years seniority and worked at Dearborn Engine on the cylinder head machine team. Moore selected electrician, machine repair and tool-and-die as his top three trade preferences and was pleased to be selected for the electrical apprenticeship program. He’s been waiting a long time to get into the apprenticeship program. Moore said workers on the cylinder head machine team perform a lot of troubleshooting functions like their skilled trades counterparts.

“A lot of the terminologies and troubleshooting mindset I already had,” he said while demonstrating how the electro-pneumatic and the electro-mechanical simulator works at the TTC. “It’s already like a little bit of skilled trades in there.”

And he already has an associate’s degree, so he’s comfortable in the classrooms at the TTC. He’s grateful for the expert instruction he’s already received from journeymen involved in his training.

Health and safety, he said, is an integral part of the apprenticeship training. You cannot be overconfident or employ shortcuts.

“I think once you know why an accident happens, then you are better able to attack that,” Moore said.