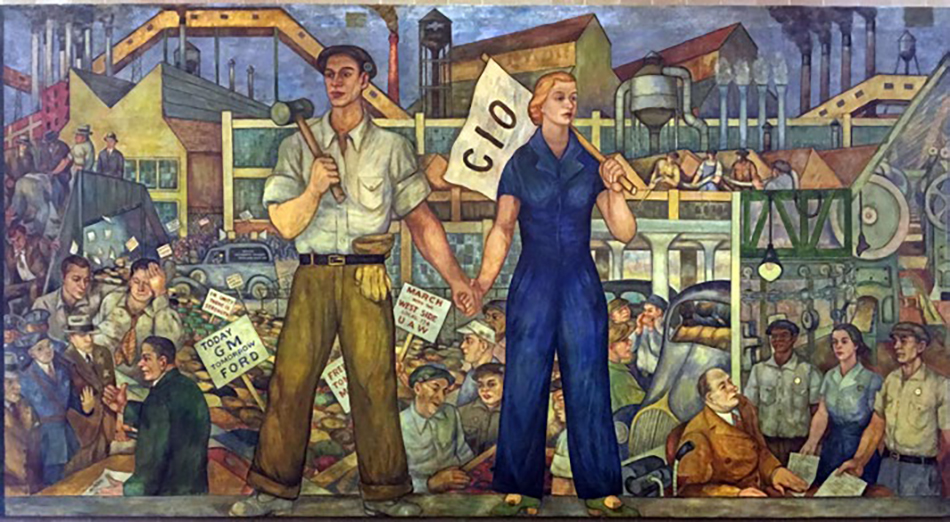 After hanging in various Local 174 union halls for three quarters of a century, the Walter Speck-painted mural informally known as “Ford Riot” was water- and tobacco-smoke damaged, dulled and had significant tears. It was also homeless as the Detroit local moved its union hall in 2014 and there was little room for the 9-foot by 20-foot artwork.

Thanks to a collaboration by the local with the Wayne State University Walter P. Reuther Library, this valuable piece of labor history has been painstakingly restored and moved to the library so that union members and the general public can look back on key moments in Michigan’s rich labor history.

While the local is sad to have the artwork leave its ownership, it is happy that it has been restored to its former glory and more people will get to appreciate it, said Local 174 President John Zimmick.

“This mural has a very special place in the hearts of UAW members,” Zimmick said. “Outside of our local union hall, we could think of only one other place it could be appropriately displayed and appreciated: The Walter Reuther Library.”

The mural showcases several pivotal moments in the UAW’s formation, including the 1936-37 Flint Sit-Down Strike, the 1937 Battle of the Overpass at Ford Motor Co., as well as a painted rendering of Local 174’s first contract. Local 174, Walter Reuther’s home local commissioned this artwork, and others, to enliven their union hall and teach members about their history in the fight for working people.

The artwork was long thought to have been created through the New Deal-era Work Projects Administration’s (WPA) Federal Art Project by Speck and Barbara Wilson, who would later become his wife. Speck, an influential member of the Detroit arts community, headed the WPA’s Detroit Art project, but it is unclear whether the UAW fully funded the work or if WPA funds were provided.

What is clear is that the mural, despite its size, has been moved quite a few times. It was created at the local’s first home at 2730 Maybury Grand St., in Detroit; in 1954, it was moved when the building was razed to make room for a highway and installed at the new union hall at 6495 West Warren St. In 2002, the local and artwork moved to Romulus, Michigan. In 2014, when the local moved back to Detroit, it could not find office space to accommodate it. It was donated to the Reuther Library, but it took a lot of work to get the artwork restored so it could be displayed to the general public. Extensive repair work at a cost of $60,000 was funded by members and retirees of the local, the Michigan Labor History Society, the Michigan Council for Arts and Cultural Affairs, the National Endowment for the Humanities and private individuals.

The project was nominated for the Reference and User Services Association’s John Sessions Memorial Award, which recognizes a library which has made a significant effort to work with the labor community and by doing so brought recognition to the history and contribution of the labor movement to the development of the United States.

“This project was a huge success on many fronts,” Erik Nordberg, director of the Reuther Library, said in his nomination form. “First and foremost, it preserved and professionally restored this important artistic work — which may be the only surviving piece of WPA art to depict a named labor organization. Secondly it moves this important and engaging piece into a more publicly accessible location, where it will be easily viewed and more likely to educate the public about labor history.”