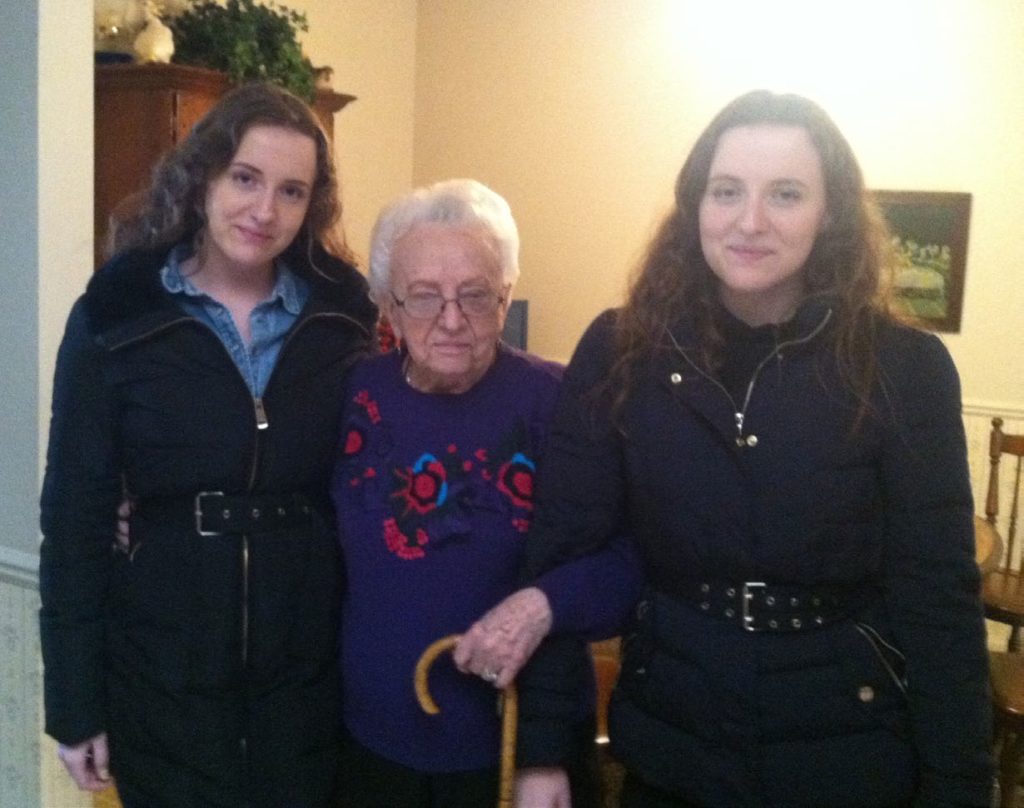 Margaret Catanzaro, with her granddaughters Chelsea and Megan Klassa, makes it very clear: Her union never told her who to vote for. It recommends candidates based on their support of working people and workers’ issues.

Editor’s Note: Margaret Catanzaro started at the Ford Highland (Michigan) Park Plant in 1942. Over the years she also worked at Utica Trim, Van Dyke Trim, and finally retired at Chesterfield Trim. She did various hourly jobs, including line production, sewing machine operator and, finally, inspection. She was married to Joe Catanzaro who served over 25 years as a union committeeman up to his retirement as president of Local 400. Her son, Jasper, a retired UAW staff member and also a Local 400 retiree, helped put his mother’s story together.

My name is Margaret Catanzaro and this year marks the 76th anniversary of me being a member of the UAW. I am over 94 years old. I used to be quite active as a retiree but have slowed down a lot. One problem is that in the last few years I am slowly going blind because of macular degeneration. As they say, “The golden years aren’t so golden.” Yet, for me I can look back and tell you what has been golden for me.

I started at Ford Motor Co. back in 1942. I was 19 and my mother knew a lawyer, who knew someone, and I was told to go to Ford Motor Highland Park, and I would be hired. During the war, it wasn’t that hard to get a job, but to get a job at Ford was special. During the war, I had a number of jobs but the one I had the most fun doing was wrapping gears and other tank parts to be sent all over the United States, Europe and the Pacific. You see, we were building tanks back then at Highland Park, and tanks broke down and needed to be repaired. So, we shipped parts all over the world. As I wrapped and taped these parts for shipment, I would slip in a scrap piece of paper with my name and address to let those soldiers know who was wrapping these parts. As the war dragged on, I got letters from all over the world from soldiers stationed just about in every country you can think of. I tried to write back to as many as I could because we all knew soldiers needed those letters from home.

Most people don’t know that during the war the UAW had an agreement with all the auto companies, which were now producing war materials instead of cars. It was signed by R.J. Thomas, then UAW president, and sent to President Roosevelt. It stated that the UAW would not strike any factory as long as the war was on.

However, the UAW at Ford was less than two years old when I started. It was the last of the automakers to become unionized, before the war started in 1941. During the war, even though there always was a shortage of workers, it seemed that the company looked for any reason to fire people. One day in 1943, a young woman at the Highland Park plant came to work wearing red slacks. They fired her because they thought the red slacks would enrage the men, like red enrages a bull. It took a while, but the union finally won her job back. Most of us wanted to work and do a good job. We knew our work was to help win the war, but there were those supervisors who still thought they could treat us as though we weren’t human.

Before and during the war, the very worst of those people worked for Mr. (Harry) Bennett, a thug hired by Henry Ford himself. Bennett oversaw the Ford Service Department with an iron hand. His union-busting tactics and strong-arm bullying was well known for many years. Even though we had a union, the Ford Service Department, or as some called them the “star men” because of the badges they wore, still acted as though we were sub-human or slaves and had to be treated as such.

I eventually met my husband, who also worked there. We were married for well over 50 years. After the war, most of the women left to give their jobs back to the returning veterans. I too left, became a mother but soon went back to work to help make enough money to buy a home. I eventually retired in 1982.

Over my working years, I saw the first pensions, health care, paid vacations, cost of living adjustments, pay for being laid off, holiday pay, etc. etc. All these benefits were won because people stood together, and the union leadership bargained for them. But let me remind you, a union means a worker has to be more responsible, not less. You have to take the time to find a good leader, and vote them in. You have to give input and direction to your representatives about what is needed in a contract.

Now, without a union, you have no responsibility. You just wait for the boss to be generous to you. You don’t have to think or be responsible. You are just a worker or a piece of machinery.

Since I retired, those anti-union TV and radio commentators have gotten louder. Today, those who cry the loudest are getting paid millions to undermine the strength of the people and the unions. They say, “You don’t need a union. You don’t need someone taking union dues.” These catchy phrases are repeated over and over to undermine the one thing we all need: A good-paying, secure union job. Yet, these same commentators are paid millions by big advertisers to divide us. They are hypocrites.

While I’m opening up, there is another thing these same TV people have tried to pound into our head: “The union tells you who to vote for.” That is a complete lie. The union NEVER TOLD ME WHO TO VOTE FOR. The union has supported all those running for office who had the best interests of workers in mind. The union has ENDORSED and asked me to support candidates, but never have they demanded my vote. Don’t correct me, asking is not ordering. Period.

I can tell each of you honestly, over my many years, the UAW has endorsed Democrats, Republicans and Independents all over the country. That’s right, there were many Republicans who at one time defended unions and union membership. President Eisenhower comes to my mind as someone who was emphatic about union membership. So were many Republican senators and congressmen. Yet, over the years those Republicans who supported unions and worker rights have gotten fewer and fewer so that today you can’t find any. I listened to Walter Reuther when he said, “What we win at the bargaining table, we can lose at the ballot box.” Take out those smart phones and check it out. Use them for more than tweeting.

But there are big-mouth TV commentators constantly telling everyone they don’t need a union or elected representatives who support unions. Certain TV networks spend their whole day telling you who to vote for. Then they tell you the unions are influencing your vote! More hypocrites. They have turned this country into something—something I just don’t understand anymore. I have been alive from President Calvin Coolidge through Trump. I, too, have been around during the tenure of all the UAW presidents. Yet, today, we are following advice by divisive people, and sad to say our current U.S. president is the worst. We should be working together for the common good of all, not the few. Those who are making millions are making them off of us. Today, a decent wage and job are not available to the vast majority of people. Yet, when we complain, our voices are drowned out by millionaires who control the radio, TV and just about everything else.

So, today, before I leave this Earth, I remind all of you to be proud you are a union member. The union gave me good wages, a good retirement, and dignity for 75 years. Finally, remember Reuther’s advice: Vote for those people who support unions. Don’t lose what we have won at the bargaining table.