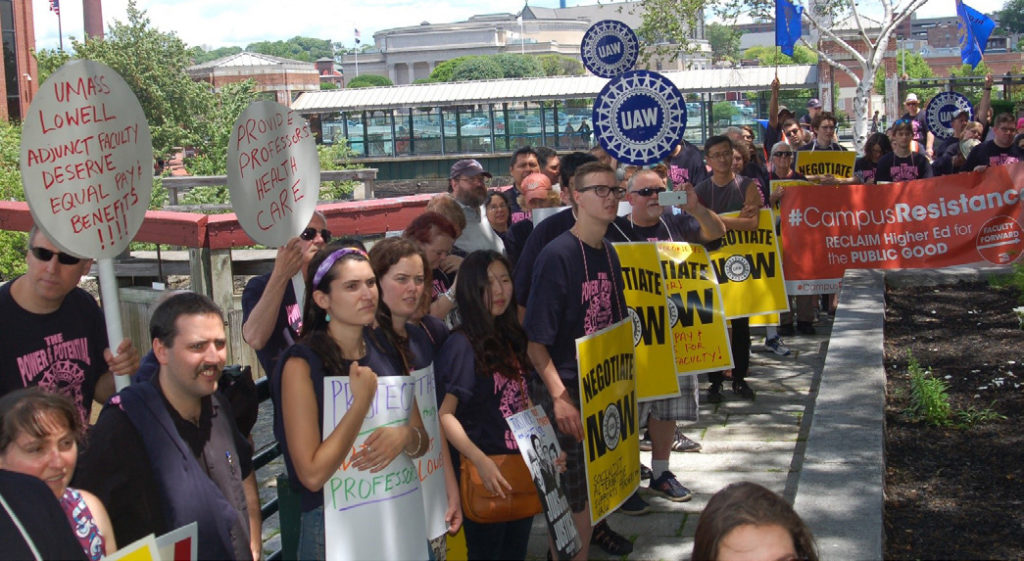 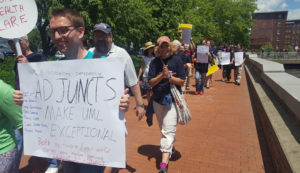 The Union of Adjunct Faculty at UMass Lowell (UAF), a unit of United Auto Workers Local 1596 rallied with hundreds of supporters on June 20 outside the UMass Lowell Inn and Conference Center to protest the refusal of UMass Lowell to give them pay and benefit parity with adjunct faculty in the rest of the University of Massachusetts system. Our union represents over 550 adjunct faculty members at UMass Lowell who have been without a contract for two years.The union chose the venue to highlight the hypocrisy of UMass Lowell Chancellor Jacqueline Moloney, who was hosting her second annual conference on Women’s Leadership inside. Moloney has resisted providing equal pay and benefits for her own Lowell adjunct faculty, 50 percent of whom are women.

Members distributed flyers to conference attendees during registration, which noted that UMass Lowell pays a base course rate 32 percent lower than at UMass Amherst and UMass Boston and that while adjunct faculty at all three other UMass campuses receive health insurance and employer retirement contributions if they teach a minimum of two courses per semester, UMass Lowell provides no health insurance or retirement benefits to any of its adjunct faculty. UMass Lowell adjunct faculty teach the majority of undergraduate courses as well as many graduate level courses. 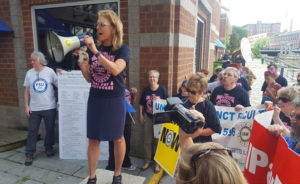 UAF President Ellen Martins, a member of the music department faculty for 30 years, said that her members are “highly qualified, with advance degrees,” but that because of their low pay and lack of health insurance, many are forced to spend up to half of their annual pay to insure themselves and, after decades of service, have little retirement savings, none of which came from the University. As State workers, they do not get Social Security.

Kushner then led a delegation inside the conference to deliver a letter of support, signed by over 170 elected officials and union, community and faith leaders which called on Chancellor Moloney to end the two-year stalemate and agree to equal pay and benefits for the UMass Lowell adjunct faculty. When the delegation returned, the rally concluded with demonstrators chanting “we’ll be back!”

To keep the pressure on UMass, Director Kushner demanded that the University send a real decision maker to the table, joining her and the bargaining committee at the next bargaining session. Solidarity!