UCONN Graduate Employees Are Ready For What’s Next 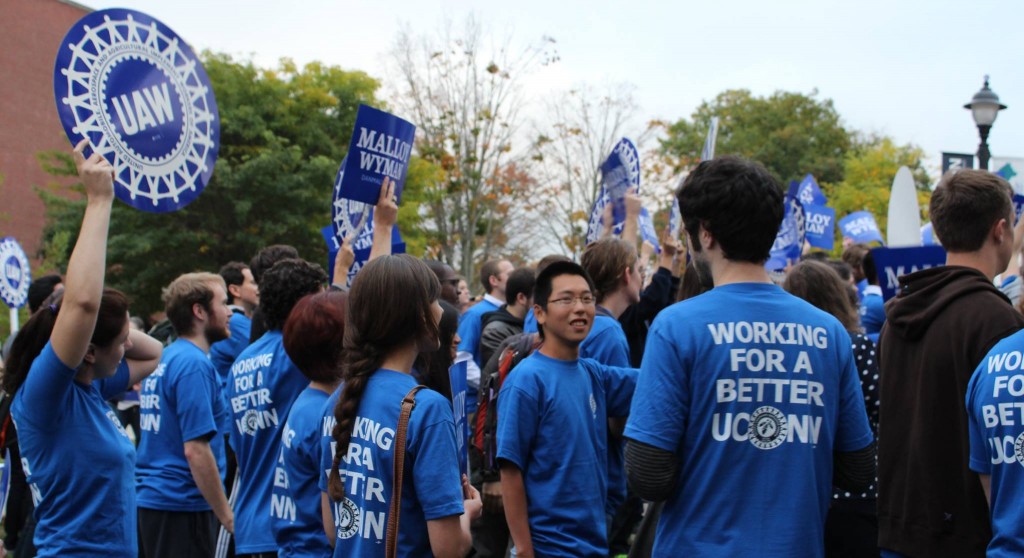 You know that you are on to something good as a local union when the original activists can take a step back and watch the newer folks, enthused with the passion for their new union, take charge and run with what was built.

That’s the way it’s going at the University of Connecticut. Cera Fisher, a graduate employee in the Department of Ecology and Evolutionary Biology, was one of many activists who put in long hours at the bargaining table for more than a year. She’s more than happy to take a step back and watch others pour their energy in to continue the success that the Graduate Employee Union-UAW Local 6950 has made for itself.

Maybe the newer activists were charged up by the contract that was won in April. Graduate employees at the UCONN overwhelmingly ratified a three-year agreement that makes significant improvements for members. It provides graduate employees with a minimum 9.3 percent compound wage increase; improves health care without a premium increase; gives relief from the rising cost of student fees, and makes advances in other areas such as six paid weeks of maternity leave, a child care subsidy, an expedited grievance procedure and inclusion of gender identity as a protected category in the agreement’s nondiscrimination article.

The health care improvements, which will now track those of other state employees, were a big reason for 99 percent of those voting approving the local’s first contract.

“Everybody is thrilled because we’re going to have health care that we can actually use,” Fisher said.

The committee plowed through other issues critical to members. It won lactation stations for nursing mothers and reasonable access to all-gender restrooms. And graduate employees won $900 toward mandatory student fees.

“I can say that before this contract we had really been drowning in these student fees,” said Casey Green, a member of the bargaining committee and former UCONN graduate in the History Department who recently left for a teaching position in Louisiana. “They have been going up five, six, seven percent a year. The relief we get in fees is money back in our pockets.”

UCONN voluntarily recognized GEU-UAW in April 2014 after a majority of graduate employee indicated their desire for UAW representation. But the university’s positive stance on representation did not mean translate into a cakewalk at the bargaining table. The university at first only offered short and infrequent bargaining sessions last fall. Members applied pressure through direct actions such as a sit-in to get the administration to move closer to a settlement.

“The number of graduate employees who participated in actions and enthusiastically supported their bargaining committee certainly provided a boost to negotiators and sent a message to the university,” said Julie Kushner, director of UAW Region 9A, which includes Connecticut. “It’s that level of solidarity that is necessary for GEU to build a strong local and win economic justice for their members. They are off to an excellent start.”

The process of building a stronger local has already begun. Fisher said a bylaws committee has been formed and was hard at work making sure all constituencies in the local were represented.