Together We Win: Illegal, Unethical and Shameful

Workers Voted for a Union, but Volkswagen Continues to Fight Them

“We will not fail and refuse to recognize and bargain with United Auto Workers Local 42 as the exclusive collective-bargaining representative of the employees in the bargaining unit.”

That was the message the National Labor Relations Board (NLRB) in August 2016 instructed Volkswagen to send to its skilled trades workers at the automaker’s Chattanooga, Tennessee, plant after they overwhelmingly voted for UAW representation nine months earlier.

Instead of respecting the result, Germany-based Volkswagen decided to disgracefully use the American federal court system to stall and then hope for a possible change in the makeup of the NLRB. When Republicans took over the White House following the 2016 elections, the gambit paid off: The NLRB, now with a GOP majority that has proven hostile to workers, managed to get the case remanded from the federal courts back to the now Republican-led NLRB. During an 11-day period in December 2017, Volkswagen coordinated with union-avoidance attorneys and new NLRB members appointed by President Trump to try to overturn the free and fair election among Chattanooga’s skilled trades employees two years earlier.

If free and fair elections are supposed to mean something in this country, the world’s largest automaker thumbed its nose at our democratic process and their own workers. What Volkswagen did at its only North American plant was illegal, unethical and shameful.

The Chattanooga plant is the only Volkswagen facility in the world without employee representation. The company claimed that the election must include production workers, in addition to skilled trades workers. Courts have consistently upheld the right of workers to organize in distinct bargaining units, a position the NLRB took in August 2016. 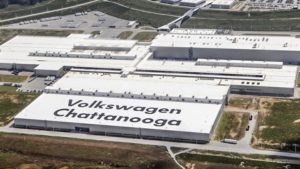 Volkswagen’s maneuvering also violated commitments the company made to the UAW and the German trade union IG Metall to abide by a court decision that surely would have favored employees. As of today, the matter remains in limbo at the NLRB — which supervised the late-2015 election and certified the results.

Meanwhile, members of Congress and the NLRB’s inspector general reportedly are investigating Trump appointee William Emanuel over potential conflicts of interest related to decisions he made in cases involving his former employer, the union-busting law firm Littler Mendelson — which happens to be Volkswagen’s legal representation.

What does all this mean for Volkswagen’s skilled trades employees? Unfortunately, their voices remain unheard, for now. They’re understandably angry and disappointed. But they remain committed to achieving their goal of meaningful representation in the workplace — and the UAW remains committed to helping them get there.

“We will continue to stand by Volkswagen’s U.S. workers who voted for union representation. We will not be deterred by Volkswagen’s disgraceful conduct in this case,” said UAW Secretary-Treasurer Gary Casteel, director of the union’s Transnational Department. “Volkswagen has no problem recognizing unions at its facilities around the world—except in the United States of America. That flies in the face of the democratic principles that we as Americans value.”

Bottom line: It’s not too late for Volkswagen to abide by the NLRB’s earlier decision. The company should accept the results of the 2015 election and join hard-working men and women at the bargaining table in Chattanooga.

To do otherwise is inconsistent with Volkswagen’s own principles of social responsibility and the American principles of respecting the results of a free and fair election.