The UAW and the KCTU are both affiliated to IndustriALL, a global union which has shown solidarity with the Korean labor movement in its opposition to the Park regime and its demand for the release of Han and all of the confined union leaders.

Former autoworker and current president of the Korean Confederation of Trade Unions (KCTU), Han Sang-gyun, and KCTU General Secretary Lee Young-joo, have been in prison, and under house arrest, since December 2015. The charges against both unionists relate to organizing a public protest against regressive labor law reforms put forth by former President Park Gyun-hye. For nearly two years, Han has been denied the right to sit down at the dinner table with his family. He is only permitted five visits per month that he must carefully ration between his family and business. Recently, Han’s son was denied visitation after taking leave from the military because it exceeded his monthly allotment of visits.

For Secretary Lee, her movements have been restricted to the KCTU headquarters because she opposed the regressive labor policies of former President Park through peaceful protests. Several other South Korean trade union leaders remain incarcerated as well.

In May 1980, at the age of 17, Han stood up against the military dictatorship, which then ruled South Korea, as part of the Kwangju uprising. His participation helped to liberate the city of Kwangju from the nation’s military government for five days before the military crushed the uprising, leaving more than 200 civilians dead. This was Han’s introduction to the struggle for social justice.

In 2008, Han was elected chairman of his local union representing the employees of Ssangyong Motor. When the company threatened to lay off more than 2,000 workers, depriving them of not only wages but also of company subsidized housing, Han led hundreds of them in an occupation of the plant. For his courageous efforts, Han again faced violence. After 77 days, the police ended the occupation by force. This led to Han’s first imprisonment that caused him to be separated from his loved ones. He served a three-year sentence from 2009 to 2012. After his release, Han continued to fight for his fellow workers. He staged a 171-day sit-in near the plant, eventually saving hundreds of jobs and winning severance concessions.

In 2014, Han became the first president of the KCTU elected by direct vote. He was fully aware, from personal experience, that the state could deprive him of his freedom. Even so, he demonstrated his courage by leading the People’s Mass Rally to oppose President Park’s policies of austerity economics and expanding precarious work. President Park had him arrested and ordered police to violate the sanctity of the Buddhist monastery where he took refuge. President Han is again paying the price of his courage: serving another three-year sentence away from his family and loved ones.

In November 2016, the UAW sent a representative to South Korea to visit Han in prison and participate in demonstrations condemning the South Korean government’s attack on workers. These demonstrations became known as the Candlelight Revolution. Eventually, the Candlelight Revolution removed President Park from office on bribery charges. She is now in prison awaiting trial. The UAW has been closely watching Han’s case. 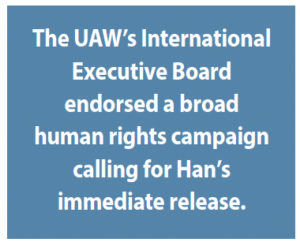 In August, the UAW International Executive Board (IEB) unanimously endorsed intensifying our efforts to help win Han’s release. The board passed a resolution calling for South Korea to release Han, Lee and other trade unionists from their political imprisonment. Specifically, the resolution calls on the Government of the Republic of Korea to rescind all sentences and drop all charges against trade unionists that are related to peaceful protest, including those against KTCU President Han and KTCU General Secretary Lee. The IEB endorsed a broad human rights campaign calling for Han’s immediate release, which includes social media, government-to-government diplomacy and mobilizations. (See full text of IEB resolution at tinyurl.com/ybjqxzqb .)

While the IEB was taking this action, UAW representatives went to the Embassy of the Republic of Korea and met with Employment and Labor Attaché Cho Ohyeon. They delivered a stern message from UAW President Dennis Williams to the new South Korean President, Moon Jae-in, calling for the release of President Han. The UAW views President Moon’s election as a very positive development. Moon is a human rights lawyer with a history of fighting South Korea’s authoritarian governments. He has committed his government to upholding human and labor rights. Releasing President Han, General Secretary Lee and the other unjustly charged and imprisoned unionists would show the world that President Moon’s government acts in accordance with the values that he has espoused throughout his career. You can help fight for Han’s release by taking action. Sign the petition to release Han, Lee and other South Korean trade unionists at uaw.org/FreeHan and get your union sisters and brothers to do the same.