Together we win: A Fighter for Freelancers

Being a freelance journalist is tough work. Beyond the many hours of research, reporting and writing a freelancer must perform, finding publications willing to buy their work is time consuming.

Many freelancers know that in a lot of cases, non-payment or slow payment is just a cost of doing business. What chance do they have at winning, they say, when it’s just one writer against a publisher who refuses to honor what was promised, particularly in an environment where publishers are facing severe economic stress?

“The easiest thing to do is stiff the individual freelancer,” said Larry Goldbetter, the president of UAW Local 1981, the National Writers Union (NWU). “You can’t stiff the IT guy.” 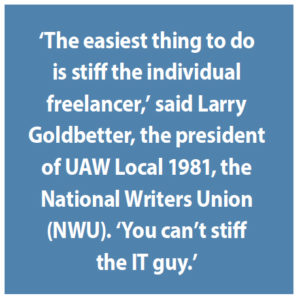 And that’s where the NWU comes in. The national union with chapters in 12 cities takes on publications that won’t pay up. The union recently won two large settlements, at Ebony magazine in February, and at Nautilus magazine in January, that netted a total $160,000 for 80 writers. That follows a 2014 victory in which the union won $125,000 for 12 freelancers who wrote for Heart and Soul magazine.

At Ebony, the union filed a lawsuit in Cook County Court in Chicago after a months-long #Ebonyowes social media campaign. It even enlisted Congresswoman Maxine Waters, D-California, to call the magazine’s owners on their behalf. Ebony and CVG Group LLC, which bought the magazine in 2016, agreed to pay all monies owed in four installments in quarterly payments.

“This is such an important victory,” said AJ Springer, an Ebony freelancer. “Too often, freelancers are willing to write off late payments and non-payment as the cost of doing business.”

The NWU represents freelance and contract writers in all genres, media and formats. Its members include journalists, book authors, business and technical writers, website and email newsletter content providers, bloggers, academic writers, editors, poets, playwrights and other writers. Because of these victories, the union is seeing a lot of interest from freelancers who understand that there are many writers out there in the same predicament.

“It’s hard. A lot of freelancers have other jobs, too,” Goldbetter said. “They spend so much time just trying to survive. For a lot of people, it’s their first union experience.”

Goldbetter said freelancers are starting to realize that they have power if they come together to solve their issues. One writer stands little chance.

“When you have 50, you can’t blow them off,” Goldbetter said. “That’s really resonating with people. That’s really true.”

The NWU is currently fighting for 18 freelancers at Consumers Digest who are owed more than $30,000. It also has organized writers at popular left-leaning publications and websites such as The Nation and In These Times and has ongoing organizing drives at Jocobin and The American Prospect.

Goldbetter said they are trying to set a base rate for freelancers because there is no minimum wage for freelnacers.

“Freelancers are the fast-food workers of the publishing industry,” he said.