Together we win: Columbia University Graduate Workers Gain a Voice 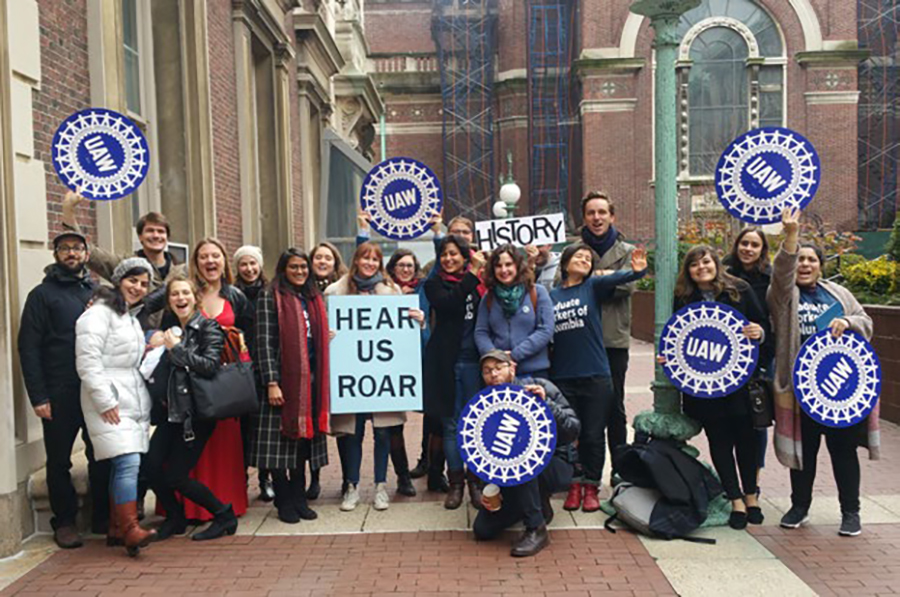 Columbia University graduate workers get set to head to their polling location to vote.

Graduate workers at Columbia University in New York celebrated a hard-won victory Dec. 9 when they voted 1,602 to 623 in favor of joining the UAW. With momentum from a landmark National Labor Relations Board (NRLB) ruling four months earlier that restored union rights of graduate teaching and research assistants nationwide, Columbia graduate workers voted to join the Graduate Workers of Columbia-United Auto Workers (GWC-UAW). They also garnered strong support from members of Congress, other public officials and community leaders in New York, and Columbia faculty and students.

“Thousands of RAs and TAs like me have won a voice to make sure Columbia University is the best place possible to learn and work,” said Addison Godel, a teaching assistant in the Architecture School at Columbia University. “This marks a major victory for the entire Columbia community.”

Olga Brudastova, a Civil Engineering and Engineering Mechanics Department research assistant at Columbia, says unionizing gives them the respect from the university they deserve. “We bring in nearly $1 billion each year in grants and contracts and teach courses from chemical engineering and applied physics to biology and religion, but for too long Ivory Tower administrators have been calling all the shots,” she said.

Columbia graduate workers have already won numerous improvements to parental leave, wage and child care polices but are still working on problems such as increasing teaching loads, late pay, unreliable health benefits and sexual harassment. Joining the UAW means they now have a voice on the job to protect these hard-won improvements and bargain for protections that will make their jobs and the university better.

“This is just the beginning of great things to come for the Columbia community and we’re proud to stand with graduate workers to bargain collectively for important improvements to pay and benefits that strengthen academic quality and student success,” said Julie Kushner, director of UAW Region 9A. “By standing together, Columbia graduate workers have paved the way for thousands of other research assistants and teaching assistants to have a recognized voice in America’s higher education and build the institutions that we need for a more fair, just and equitable country.”

“The UAW has a proud history of helping higher education employees win respect on the job and union rights at public and private universities from coast to coast,” said UAW President Dennis Williams. “More than 38,500 teaching assistants and research assistants have formed their unions with the UAW, cementing real improvements on the job and for their families. Today, we celebrate Columbia graduate workers as they embark on a new journey to build a brighter future at one of our nation’s most prestigious universities.”

The UAW represents more than 38,500 graduate workers at 48 campuses — more than any other U.S. union.