The long line snaked out of the door of the Sheboygan County Labor Council Hall on an unseasonably sunny and warm day the week before Christmas but the people in it were in good spirits. This holiday season would be one filled with memories for Kohler Company workers in Wisconsin who lined up to receive Christmas presents donated by the community.

Their month-long strike was over, but the Barbie dolls, board games, stuffed animals and other toys piled high on tables inside the union hall were still needed, welcomed and appreciated as Local 833 members got ready to celebrate the season and a new hard-won, four-year contract that demonstrated in a tangible way how worker solidarity can win not only a good contract from a company with a long history of trying to beat down working people, but also win community support and position workers for additional successes down the road.

The word “solidarity” gets tossed around a lot in the union movement, but it remains the key method in how we win economic justice. For Local 833 members it meant standing up for what you know is right; it’s backing up your leadership in difficult, uncertain

Perhaps most of all, it’s demonstrating to management that you won’t be destroyed, divided or demoralized: Whatever it takes, as long as it takes was the operative phrase among Kohler workers. “It’s a nice feeling because you know you have all of these people behind you,” said David Davies, a material handler with five years of seniority. “With all these numbers how can Kohler say, ‘You guys are standing here alone,’ when we’re a big family?”

Standing up for younger workers

In 2010, the local agreed to a contract that allowed Kohler to bring new workers in at a much lower rate. Bargainers at the time saw it was necessary because of the economy and the ever-present threat that Kohler would move jobs down South or even to Mexico. With an improved economy and Kohler turning healthy profits, bitterness remained over the Tier A and Tier B pay scales, with some Tier B workers earning as low as $12.92 an hour. Many Tier B members were living paycheck to paycheck, without the prospect of ever getting ahead – or even moving out of their parents’ home. The 2015 bargaining team resolved to address the problem without takeaways in other areas of the contract.

But before the walkout, the local leadership made sure that workers were educated about the issues, why they were important and that they could win more economic justice through remaining strong together. Leadership continuously walked the floor, answering questions and gathering member input. Care was taken to make sure younger workers, many of whom didn’t grow up in a union household like their older union members, were well- informed. James Summerville was a vital link in the local’s communication effort. As a steward and a younger worker in Kohler’s Pottery Division, he connected with his coworkers and made sure others knew what was accurate and what was plant rumor. The communications effort included numerous meetings, social media and traditional communications.

“It became more of an educational process, letting them know what the do’s and don’ts are, what the company perceives, what the plans were going forward because there were some vague threats about moving some of the production away,” Summerville said.

“We basically re-educated a lot of our members, saying, ‘If we stand together, we will come through this good and that’s exactly what happened,” Tayloe said.

The bargaining committee received an overwhelming strike authorization vote and voted an initial company offer down by 94 percent. About 2,100 Local 833 members walked out on Nov. 15 and were back on the job Dec. 17. They didn’t win everything they wanted, especially the elimination of the two-tiered wage system. But they made enough improvements for the Tier B workers that brought their wages up from an average of $14.69 an hour to an average of $19.39 an hour, a $4.70 an hour increase over the course of the contract. They also improved their insurance coverages.

Amanda Rowe, a machine operator in the foundry who has worked at Kohler for 2 ½ years, said the strike was difficult, but necessary — and ultimately successful. As a lower seniority worker, she wasn’t meeting her bills.

“The contract improved a lot because I got a nice pay raise which will help me get caught up on bills and maybe be able to go out to a movie or something. We’re always staying at home,” said Rowe, the single mother of two children, ages 16 and 11. “Plus I want to build a future for my kids, to help them save, or go on a vacation with them at some point. “As it was before, I picked and chose what bill I was going to pay on a monthly basis because sometimes I just couldn’t pay all of my bills and make sure

my kids had enough to eat,” she said.

The contract passed with a 91 percent majority. Davies, Summerville and Rowe and the other Tier B workers said Tier A workers showed tremendous solidarity by supporting them and not allowing the company to divide the Tier B workers who made less.

“The Tier A’s had the Tier B’s backs and that went a long way because that really brought the group together,” Davies said.

‘Why are all the picketers getting fat?’

That’s not a question one expects to hear during a strike. When Tayloe heard the comment, it was no doubt said in jest, but it demonstrated the overwhelming support Kohler workers received from the community, from local restaurants like Texas Roadhouse, which told strikers it realized that if they were not out there fighting for a good wage, its business dries up. Residents continuously dropped off food and donations to those walking the line. Rowe was on the line when a local woman stopped by to give everyone in her group a $25 gift card to the Piggly Wiggly grocery store. There was always coffee, hot cocoa, and food of all types on the line, much of it donated by local businesses and residents. Residents wrote letters to Kohler and the newspaper in support of the strikers.

“Community support was huge and I think it helped a lot to get the settlement,” she said.

“There was tremendous union support from all over the country,” Summerville added.

Those businesses and residents will no doubt be remembered by Local 833 members when they go to buy goods and services in the Sheboygan area.

“They knew we were out there for the right reasons, too,” Tayloe said.

Optimism for the future

On the first day back, Tayloe said some of the members had a laugh at management’s expense when they discovered how badly some managers put together products in their absence. They will have to spend some time sorting things out and fixing numerous mistakes in products. Perhaps management even gained some appreciation for the difficulty of their jobs. 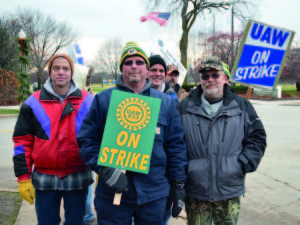 As for the long-term future, Tayloe is certain that the union is in a stronger place now. Sure, the financial gains that their solidarity brought were important and the reason for the strike. But there’s another gain: Two weeks into the strike, the local made sure it put workers from different areas of the plant on picket duty together. Workers from different areas of the plant now know each other better. Instead of quietly walking through different parts of the plant on their way to their particular jobs, the worker in the Cast Iron Division now knows who works in the Faucets Division and maybe a lot about the issues that workers faces, both in the plant and outside.

“I was with a group of people I didn’t even know so I got to meet all sorts of new people,” Rowe said. “I think it helps build the union stronger. We all got to know each other better.”

Davies said older workers and retirees – many came out to support the active workers – told him about the friendships he would make through standing together with his co-workers that they would grow much closer. Those younger workers now know, like those who struggled before him during the strikes in 1934, 1954 and 1983 — what it takes to win a measure of economic justice, how important it is to go to union meetings and participate in the life of their local. That worker has discovered how important it is to participate in the community and how dependent all of us are on each other.

“The young ones in there now, I think they had their eyes opened as to why they need a union,” Tayloe said.

That’s a plus because 700 Kohler workers will be eligible for retirement in the next four years. Those younger workers can start building solidarity for the next contract by attending meetings, joining committees and participating in their union. Tayloe’s already seen new faces in the hall, members who now realize that being a union member isn’t a mere dues- for-service proposition. They seem ready to become the next generation of Kohler union members ready to fight for what is right.

“I think that may be happening,” he said. “I think they will.”