Respecting our Planet and Having a Little Fun Along the Way

On a Saturday in June, members of Local 2209 in Fort Wayne, Indiana, will mount their own bikes, rent a surrey bike, or maybe even rent a seat on The Pedal Pub, which is a specially built contraption where riders can responsibly imbibe while providing the pedaling necessary for movement while a non-drinking rider steers.

The Pedal Poker Run is a fun event for the local and open to the public. Proceeds benefit the Fort Wayne Trails so it perfectly blends the responsibilities of the local’s Conservation and Recreation Committee. Local 2209 represents about 4,000 members, most of whom work at the General Motors Fort Wayne Assembly plant in northeastern Indiana.

Having a local where a few people do the work and are seen by fellow union members as “the union” doesn’t build solidarity. If you have a local with thousands of members, but only a handful are involved, how does that build the power needed to win strong contracts and protect gains made in previous agreements?

Obviously, it doesn’t. It translates into a weak local union.

“When you get the same 10 people, they get burned out,” Hartman said.

The local understands that to be strong it has to have many members who participate. From the highly popular annual Christmas Party, the Easter Egg Hunt, its wild game dinner to raise funds for hunter safety and the Halloween Monster Dash 5k to clearing and mowing trails at the Acres Land Trust and many other events, it’s filling its constitutionally mandated requirement to have an active Conservation and Recreation Committee. It plays a critical role in building solidarity through its many events, but also helps members get to know each other — and the hard work that goes into running their local union. It’s an eye-opener for members just starting to get involved in their union.

“People don’t know how to get involved,” said Amy Houston, the local’s recording secretary and a member of the committee. “They can sometimes feel like it’s a club down here, and it’s not.”

To prevent that feeling, the committee makes sure members who have an idea for an event are the ones charged with putting it together. Adam Clark, the committee chairman, said the goal of the committee is to facilitate, not dictate. The committee wants to make sure the event has enough interest, will be beneficial to the membership in some way, is a responsible use of members’ dues, and fits into the plant production schedule, which is important because people cannot attend if they’re working. But the people who came up with the idea have to own it.

“We never turn anybody down. We’re always up for new ideas,” Clark said. “We will help them remove any roadblocks. That’s how I see it. We don’t want to put on anything half-assed.”

Houston added: “We have a lot of members who will take it and run with it.”

One potential roadblock is the plant production schedule. Hartman deals with this by meeting with management in January to determine how many times the plant is likely to schedule production on a Saturday and which ones. The local, however, makes it clear to the company it needs time for members to attend events.

“We try to make sure we’re not stepping on each other’s toes,” he said. “It doesn’t always happen that way.”

And it works together with the company on certain projects, such as building birdhouses on plant property. They co-sponsor the city’s Three Rivers Festival, a nine-day event in July that includes a race down the St. Mary’s River in specially made rafts. The local and GM made a raft to look like a full-size Chevrolet Silverado, which is made at the plant. The raft won Best Holiday Theme, and members loved it, cheering them on from the river banks. 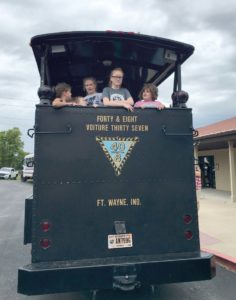 “They were on the bridges screaming at us,” Houston recalled. “There’s a lot more pride than you know about.”

The committee is justifiably proud of its work. It brings members into the workings of the local union and lets them know they have a part to play. The local faces challenges because 45 percent of its members do not live in the county and many are not originally from Fort Wayne and commute long distances on their days off just to see their families. The membership is getting younger and many don’t have the generations of union membership in their family for reference. Hartman said the local has a union education class so they can understand the local’s role inside and outside the plant.

But the most important thing they can do for members is to ask for help. They operate on the theory that everyone has something to contribute.

“Everyone is willing to help if you ask. You just have to ask,” Houston said.

“He asks me, ‘What’s the crappy job you can’t get anyone else to do?’”

And then, like many other Local 2209 members, he takes the ball and runs with it.

“All it takes is that one person to start it off,” Hartman said.