It’s proven to be the best way to close the wage gap between men and women. Organized labor contracts show no pay difference between pay and benefits negotiated for men and women in collective bargaining. Perhaps that is why for the past two decades, women have steadily increased their percentage of union membership in the U.S. In 1994 women were 39.7 percent of union members. In 2004 that increased to 42.6 percent and in 2014 women were 45.5 percent of all union members. It’s a smart move for women because they know it pays to be union. Women know as primary caregivers they’ll have better health care coverage for themselves and their children. They know they’ll get negotiated time off for illness and emergencies for their children. And when women join the UAW, they’ll benefit from standing committees, including the Women’s Committee. Women’s Committee work is crucial to both women and men at locals and to their surrounding communities.

One example of an active UAW Women’s Committee is at Local 602 at General Motor’s Lansing Delta Township Assembly Plant in Lansing, Michigan, where workers build the Chevrolet Traverse and Buick Enclave.

Committee members are riding the wave of energy from the Women’s March Jan. 21 where more than 2 million women around the world joined together in a record-breaking show of unity to advocate for women’s issues. Most of Local 602’s Women’s Committee was at the huge demonstration that day in Washington.

UAW Vice President and Women’s Department Director Cindy Estrada says all local union women’s committees play an important role. “Women’s Committees like Local 602’s are at the forefront of educating women and men on the role of, and the issues, women face in the workplace. They provide education and leadership training so women can have a meaningful seat at the table in their local union and their community,” said Estrada.

UAW President Dennis Williams says Local 602’s Women’s Committee work is a great example of what the UAW values: educating members about important issues like equal pay for men and women doing the same work and being active in local communities. “Women are an important part of the workforce at the UAW. They face challenges the UAW can make a difference about, such as helping with the demands of working full time and parenting by negotiating child care policies and flex schedules, and making sure we get the best health care possible for mothers and children when we sit at the negotiating table and collectively bargain,” said Williams.

Continue to main article below >>>

Many women today juggle a full-time job in the workplace and another full-time job when they get home, leaving little time for education and advocacy about issues important to them. Social media can help fill that gap by bringing women together and the UAW has joined that effort by providing a new online resource for UAW women. The website uaw.org/women is loaded with information and ways for UAW women to get involved and stay connected. It couldn’t have launched at a better time with widespread concern about threats to women’s equality and rights. 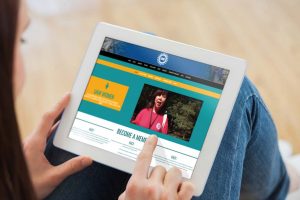 “This website will be invaluable to UAW women,” said UAW Vice President and Women’s Department Director Cindy Estrada. “Having one place to go for education and activism tools will help the UAW stay connected with the resurgent women’s movement and inspire more women to get involved. So much is at stake for women now. We have to show our strength through activism and education and this tool will help us do that.”

The website is loaded with links and resources, including guidance on how UAW women can run for political office. There’s also an events link about the UAW Women’s Conference at Black Lake later this year.

Council Co-Chair Stacey Hinson of Region 8 says the site will make it easier for Region 8 sisters to unify. It’s hard to do since they live throughout 13 states. “We can come together on this site across geographic boundaries from the small UAW local representing bus drivers in Delaware to the Big 3 local in Kentucky. Now we can easily share in one place news, issues and tools that all women can use,” said Hinson.

Continued from the top:

Local 602’s committee is active inside and out of the plant. In March, it will celebrate International Women’s Day with a speaker program and a pink hat/bandana day in the plant. Later this year they’re holding a women’s expo and school supply fundraiser to raise money for cancer research and help local kids, they’ll sell T-shirts to raise money for autism awareness and they’ll volunteer at a local church festival. The last three years they’ve raised over $28,000 for cancer research.

Bobbie Ledesma is the woman who keeps it all going as chair of Local 602’s Women’s Committee. The 43-year-old breast cancer survivor, mother and GM Lansing Delta Township forklift driver and tugger says most committee members have children, do a lot of committee work on their own time and make it a family unit. Kids and family are always at their meetings and events.

“Our job is to educate members about women’s issues and support our local community. Men need to know that our issues are their issues because they have wives, daughters and mothers. With today’s political climate it’s important to educate members on a lot of issues, like the fact that politicians want to make medical decisions for women.

“Our committee went to the Women’s March Jan. 21 in Washington, D.C., and words can’t describe how powerful it was. Those in power in Congress might set us back 40 years to a point where we don’t count in the public realm. There’s an atmosphere of ugliness and hate. We have to fight that,” she said. “I’m blessed to be a union woman who makes a good wage. A lot of people don’t have that.”

Lansing Delta Township Assembly third-shift production worker, mother and grandmother Anita Dawson works closely with the committee as chair of Region 1D’s Women’s Advisory Council and member of the National Women’s Advisory Council. She says the committee is focused on giving back to the local community and the Women’s March gave them fresh energy. “So much is at stake for women. We make 77 cents on the dollar compared to men and that’s just white women. African-American women make about 63 cents on the dollar and Latinas only make about 54 cents on the dollar. People need to understand that what we fought for we could lose,” said Dawson.

The education starts in the plant.

“We are privileged as UAW women,” said Dawson. She says the committee uses that privilege to educate co-workers and the community about problems women deal with such as sexual abuse and harassment, unequal pay in nonunion jobs, the high risk of ovarian cancer and many other health problems and challenges women bear the brunt of. “So many people say I’m glad you said you’re talking about this issue because I’m suffering with the same problem.”

“We know women don’t have equality. The UAW has a Women’s Department so they know that inequality exists. That gives us the traction to do what we need to do,” said Dawson.

The committee has a supportive local president. Local 602 President Bill Reed says women are about 25 percent of the local’s roughly 3,000 members. “We’re proud to see women stepping up with good leadership skills on the committee who are ready to lead and set an example for other women to say if she can do it, I can do it, too. I call them my Rosie the Riveters. It’s amazing the amount of time they put into their work, each with their own personal story and their own passion that they bring to the table. I’m proud of that. They represent a whole host of needs and experiences and serve our members and the local community so well,” said Reed.